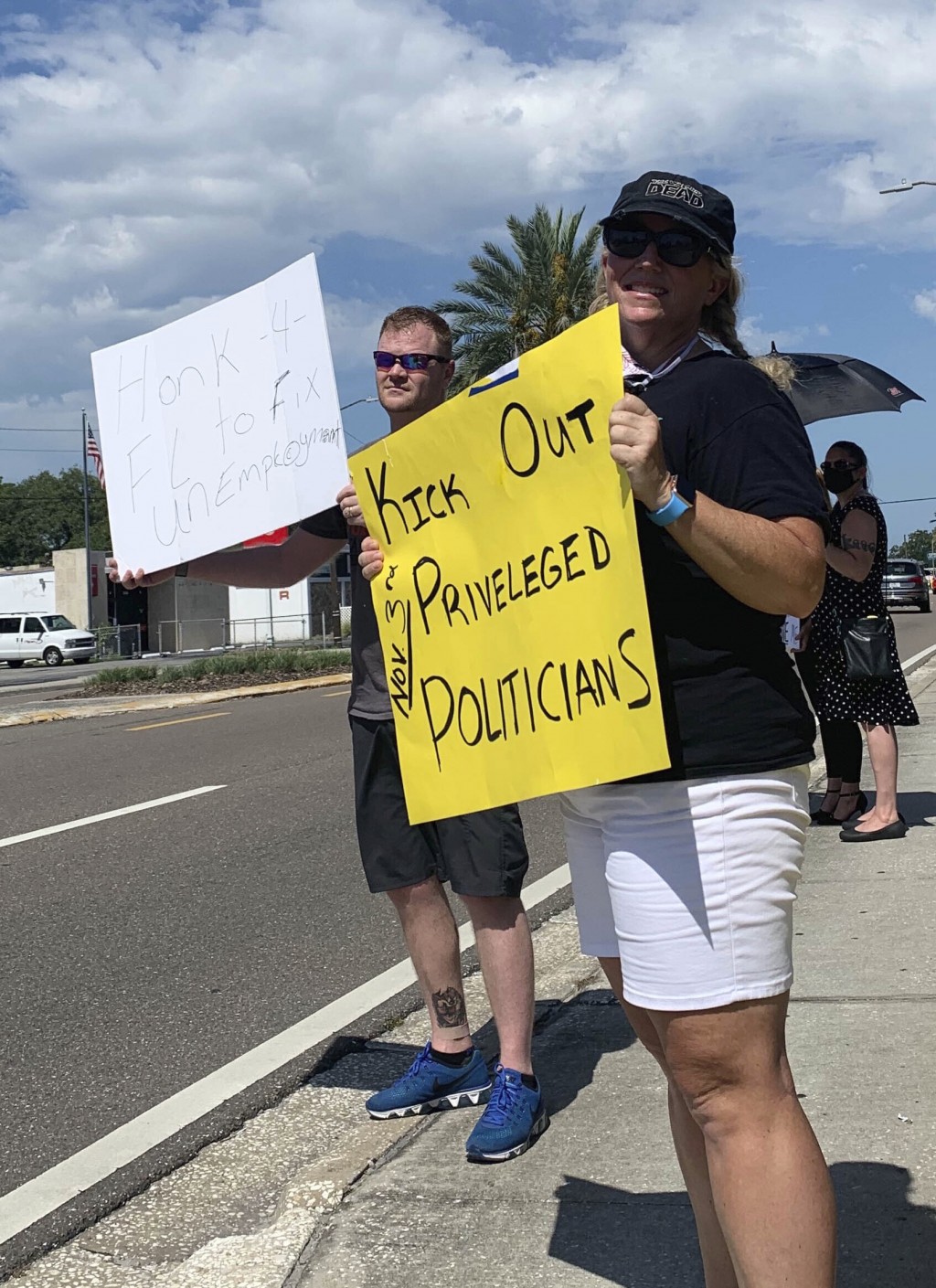 TALLAHASSEE, Fla. (AP) — Before the coronavirus pandemic sickened Florida's economy, and before the Black Lives Matter movement widened her eyes to racial injustice, Kelly Johnson had little interest in politics except to occasionally cast a ballot. In 2018, she voted for the Republican in the Florida governor's race, and four years ago she supported Donald Trump.

Now, the unemployed, white single mother of eight is running for office — as a Democrat — in a bid to oust a state legislator who is one of Florida’s rising Republican stars. She knows it's a long shot, but Johnson hopes even a loss will serve a purpose for Democrats: boosting turnout in the race to evict Trump from the White House.

“There’s a greater good happening," she said. "And I’m glad to be part of that.”

Johnson's campaign is part of a major change in strategy for Florida Democrats. Long accustomed to being on the losing side of razor-close races, state Democrats are mounting challenges in Republican strongholds — not necessarily to win but to lose by less.

The party is fielding its largest slate of legislative candidates in decades, with Democratic candidates vying in all but one of the 141 statehouse seats up for election in November. (One Democrat is challenging her exclusion from the ballot after being disqualified because of a technical issue.)

“We need to start thinking of candidates as field organizers, people who are on the ground and connecting with the community,” said Janelle Christensen, a state party activist in charge of candidate recruitment.

By most accounts, Florida is a must-win state for Trump. While his newly adopted home state has tilted Republican in recent years, the COVID-19 outbreak is threatening to reshape the political landscape. Democrats hope to seize the opportunity to retake the state, and its 29 electoral votes, ever mindful of their prior disappointments.

For years, Florida Democrats largely have focused on running up the score in heavily Democratic urban precincts in South Florida — in Miami-Dade, Broward and Palm Beach counties. While they've scrapped with Republicans for independent voters in central Florida, they've mostly ceded huge swaths of Florida long dominated by the GOP.

That concession has had consequences.

While a quarter of Florida’s 13.9 million voters have no party affiliation, registered Democrats outnumber Republicans by more than 275,000.

But Republicans control both chambers of the Florida statehouse. A Democrat hasn't occupied the governor's mansion in 20 years, and both the state's U.S. senators are Republicans.

Four years ago, Trump prevailed over Democrat Hillary Clinton by a little more than 1 percentage point — not even the closest of recent heartbreak races for Democrats. In 2018, Republican Rick Scott ousted incumbent Sen. Bill Nelson by just 10,000 votes out of nearly 8.2 million cast.

“These margins are microscopic for such a large state as Florida," said Dr. Fergie Reid Jr., a Democratic activist whose voter registration campaign is often credited with helping flip the Virginia Legislature from red to blue.

This past spring, Reid set his sights on replicating that success in Florida and began reaching out to Democratic groups across the state to help field candidates in every legislative race. By the filing deadline, 29 House seats and seven Senate seats that were previously uncontested had contenders in place.

“Florida is ripe for the taking. All we have to do is take it,” said Reid.

Conventional wisdom says it's the candidate at the top of the ticket who draws voters to the polls. But Florida Democrats are hoping that enthusiasm rises from the bottom up and compounds quickly.

“If only for the fact that if that person’s friends and family might equal 50 people and you add that up across the state, that’s enough to turn more than one election,” said Kevin Cate, a Democratic consultant who worked for the only Democrat currently in statewide office, Agriculture Commissioner Nikki Fried.

Republicans scoffed at the tactic.

“They’re going to have a great time coming together on election night and crying on each other’s shoulders," he said.

But Democrats are pressing on. On the stump and on social media, the Democrats running in red districts are campaigning on traditional party themes — protecting the environment, expanding Medicaid, limiting access to guns and promoting racial equity.

But they are also appealing to Trump voters who have soured on the president and his close ally, Republican Gov. Ron DeSantis, for their handling of the pandemic.

“At first there were some good things about Trump. A lot of things made sense early in his presidency," said Johnson, who became a community activist after losing her job because of the outbreak and struggling to get benefits from the state’s broken unemployment system.

"But there was this underlying tone of not all people in America are created equal -- and I didn’t like that. Now with the pandemic, things have just totally fallen apart.”

In Florida's conservative Panhandle, another Democrat says Trump prompted her to run — making her the first Democrat to compete in Senate District 1 in two decades.

“You can’t be on the sidelines and complain to your friends on Facebook," said Karen Butler, a 20-year Air Force veteran running in a region with a strong military presence.

“I don’t care what anybody says. I did the research. I know the demographics, I know the issues. And I know the odds," said Hoover, the first Democrat to run for House District 3 since 2010.