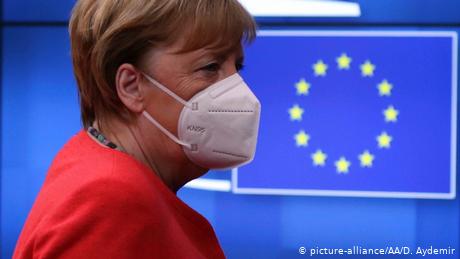 The European Union's 27 heads of state and government met in Brussels on Monday for the fourth day in a row as they try to unite behind a controversial post-coronavirus relief fund and the EU's multiannual budget.

Despite a long night of negotiations and little sleep, German Chancellor Angela Merkel sounded somewhat more confident than she did the first three days of the summit as she arrived yet again at the Europa building, the seat of the Council of the European Union (EU), ahead of Monday's round of talks.

"There is hope that perhaps an agreement can be reached today, or at least an agreement is possible," she said.

"It was clear negotiations were going to be incredibly tough, and they will continue today."

The only summit that has lasted longer was in December 2000, in Nice, France, on the topic of budget and EU reforms: Talks lasted four days and one night.

Back then, only 15 member states were involved in the wrangling. The challenge today is far greater, EU diplomats say.

"But extraordinary situations also require extraordinary efforts," said Merkel, who is currently president of the Council of the EU. "I hope we will cover the rest of the distance, which is not going to be easy."

The EU's biggest economic crisis needs to be cushioned. The proposed financial package, totaling €1.8 trillion ($2.05 trillion), is the largest ever to be negotiated.

"It's better to take more time than less," one EU diplomat said. European Central Bank President Christine Lagarde also told participants to take their time and get it right rather than just be quick about it. Like many other observers, Lagarde assumed the EU would even need a second special summit to get the unprecedented recovery fund up and running.

Brief rest, back to the negotiating table

The various camps discussed the budget dispute all Sunday night long and into Monday. By early morning, Charles Michel, president of the European Council and the summit's permanent chairman, decided that negotiations had progressed so far that a conclusion would be possible on the fourth day of the summit. Everyone agreed to get some sleep and meet again in the afternoon for the next round.

Little is known about the details of the negotiations; few EU diplomats have passed on confidential information. Heads of state and government were largely silent when they left the summit building.

Some of the debates were reportedly loud and heated. French President Emmanuel Macron threatened to leave the summit and is said to have banged his fist on the table in anger at the frugal "shopkeepers' souls from the north," a reference to mostly northern European nations that want strict conditions attached to the package.

However, on day four, Macron appeared more conciliatory. "There is hope for a compromise, but I remain very cautious," Macron said. He warned that Europe must not lose sight of its big goals including climate policy, digitalization and European sovereignty.

"This naturally strengthens our negotiating position," Austrian Chancellor Sebastian Kurz said. He has repeatedly mentioned he must safeguard the interests of the Austrian taxpayer above all else.

Italian Prime Minister Giuseppe Conte, whose country would benefit greatly from the proposed coronavirus recovery plan, accused Dutch Prime Minister Mark Rutte of playing the hero to garner domestic votes. In the long term, Europe would suffer enormously from the Dutch resistance to the size and structure of the recovery fund, Conte said.

The European Commission together with European Council President Michel had proposed financing a €750 billion recovery fund via the first-ever joint EU loan, with €500 billion to be distributed to member states in the form of grants to boost their economies hit by coronavirus fallout. The remaining €250 billion would take the form of loans.

Following three days of talks and pressure from the "frugal five," who would be net contributors, a compromise proposal is now on the table. It foresees reducing the recovery fund to €700 billion, with subsidies shrinking to €390 billion.

Spain and Italy had long opposed this reduction in subsidies and can count France and Germany, the two largest net contributors, on their side. Chancellor Merkel had previously argued that the fund would have to be large enough to truly boost recovery of the European economy over the next three years.

Another area of disagreement is the criteria to be used to determine the "neediness" of the states affected by the coronavirus crisis.

The Netherlands and other net contributors further demand strict controls on spending. They want it to be possible for a single member state to veto and thereby stop a project funded by EU subsidies in another country, such as Italy. Italy and other recipient countries oppose this.

Hungarian Prime Minister Viktor Orban sided with Italy, accusing the Dutch prime minister of having something against the Hungarian people.

EU lawyers are working on veto solution both sides can accept.

Another hotly contested issue is the "rule of law" criterium for the future distribution of grants. Most member states favor it as a means to encourage Hungary and Poland to comply with the rule of law, while Hungary and several Eastern European states are vehemently opposed. It is yet another area of the financial package where compromise must be found.