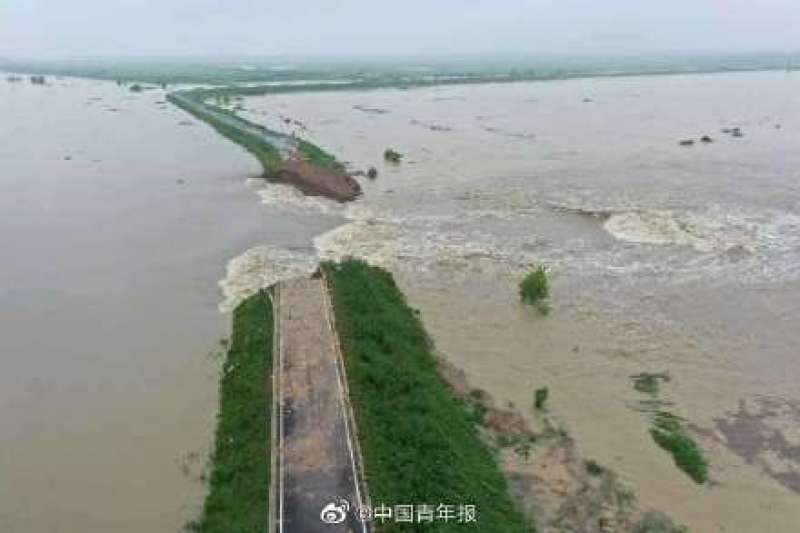 TAIPEI (Taiwan News) — Chinese authorities on Sunday (July 19) blasted a dam on a river in eastern Anhui Province to discharge floodwaters, while the vaunted Three Gorges Dam was hammered with the biggest flood of the year so far.

Communist China's state-run mouthpiece CCTV announced that a dam on the Chuhe River was blown up in order to "alleviate the pressure of flood control" at 2:49 a.m. on Sunday. As waters climbed to historic highs, two successive explosions punctured two holes in the dam in Chuzhou, Quanjiao County, allowing the muddy Chuhe River to pour into flood storage ponds below.

Prior to the blast, the water level at Zhongmiao Station in Chaohu reached 12.83 meters in the morning, surpassing the historic high of 12.80 meters recorded in 1991. A total of 35 rivers and lakes in Anhui alone had reported high water marks exceeding danger levels by noon Saturday (July 18), including the Yangtze and Huaihe rivers, reported China's government-operated Xinhua.

The breaching of the dams is expected to lower the water level of the Chuhe River by 70cm, according to the state-run voicebox Global Times. Deliberately exploding dams and embankments was a tactic used during the massive floods seen in 1998, and it appears that the government is resorting to this practice again as the floodwaters across China this year are already matching or exceeding the levels seen 22 years ago.

Xinhua that day then declared that the flood "passed through the Three Gorges Dam smoothly." This was the largest flood to hit the dam so far during this year, with the facility accumulating a total of 14 billion cubic meters of floodwater during this flood season, according to the China Three Gorges Corporation.