With the same iconic look, a larger 44mm size, and new features.

Bigger and better at 44mm

The original Promaster NY004 diving watch that was released in 1989 was the basis for the new generation of Citizen Asia Limited Promaster NY008 series watches that were released since 2018. These two collections, with the first in 2018 coming mainly on rubber straps, and the second in 2019, coming on stainless steel bracelets, have been a critical and commercial success. 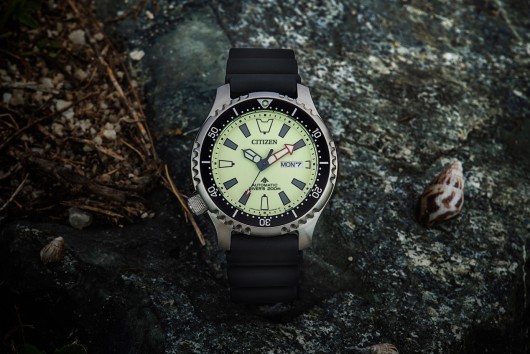 Fans of CITIZEN have lauded these collections for their robust technical features, the unique back story of the original Promaster NY004 series being used by the Italian Navy, and the affordable price point that made them accessible to everyone. Most interesting however, the Citizen Asia Limited Promaster NY008 series came with an engraving of a "Fugu", or Japanese for "pufferfish" on the caseback, which was in acknowledgement of the nickname given to the original Promaster NY004 series diver by fans. This was due to the distinctive shape of the bezel - designed with curved and sharp edges that made it easy to grip in wet conditions - that reminded fans of the pufferfish.

With the aesthetics of the original firmly established, CITIZEN has decided to use the same well-loved formula found in the 42mm Promaster NY008 series and create a new version in a larger 44mm size. This not only comes in line with modern preferences, but gives another option for fans to be able to choose the size that fits them better.

In the new, Citizen Asia Limited Promaster NY011 series, the signature design elements have been retained, such as the bezel with serrated teeth for easy gripping in wet conditions, as well as the new design of the hour markers that was introduced in the Promaster NY008 series in 2018.

The new collection though is not just about a larger 44m case size. In fact, aside from this, there are a number of new features that the collection introduces to the family of the Citizen Asia Limited series, that watch fans will certainly appreciate.

The headline feature of the Citizen Asia Limited Promaster NY011 series might be the larger 44mm case size, but there are other notable ones that greatly increase the value proposition on offer. These technical additions not only increase the performance of the watch for diving, but also make the overall ownership experience more satisfying.

The first feature is the use of a sapphire crystal instead of the mineral crystal that was used in the previous Promaster NY008 series. Sapphire crystal is more expensive and typically used in watches that are higher in price. This is because of its main advantage, in that it is a harder material that resists scratches. This means that it will resist rough handling better, and allow the crystal to retain its function of allowing the owner to read the time clearly. This is in contrast to a mineral crystal, which can pick up scuffs and scratches over time which can mar the look and functionality of the watch.

In terms of the diving bezel, there is a notable upgrade in functionality. This time, the Citizen Asia Limited Promaster NY011 series comes with 120 clicks as opposed to the 60 clicks of the previous collections. This means that it has the ability to more precisely define a dive time when it in used. Additionally, it also means a better feel in the hand as the bezel is rotated since it is more precisely made to higher tolerances. 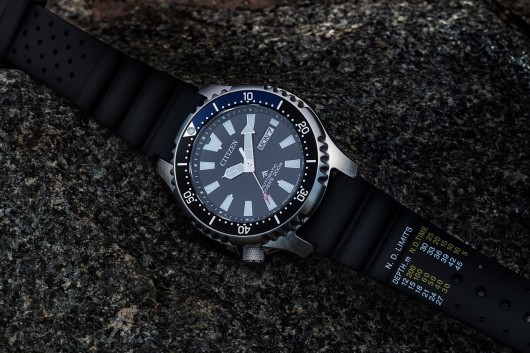 The Citizen Asia Limited Promaster NY011 series will also feature a new polyurethane strap that by all appearances comes with the same technical features already found in the current polyurethane straps supplied with diving watches. Not only is there a N.D Limits table printed on it to help divers calculate decompression times, the strap is also rippled towards the watch head, in order to compensate for the compression of a wetsuit sleeve underwater at depth and so ensure that the watch remains securely on the wrist.

The main difference is that the new polyurethane is softer, and more durable than the previous version, which helps with greater all-day comfort on land or in its native environment, underwater.

Finally, the laser engraving of the "Fugu" or puffer fish that is found on the case-back of the Citizen Asia Limited Promaster NY011 series will appear slightly differently than that found on the Promaster NY008 series. While the design of the "Fugu" remains the same, the appearance of it will be more defined, and this is because it is etched deeper in the engraving process.

The rest of the technical specifications of the new Citizen Asia Limited Promaster NY011 series will be familiar, as the watches will use the proven in-house cal. 8203 movement, have 200m water resistance and be compliant with the ISO 6425 standard for diving watches. 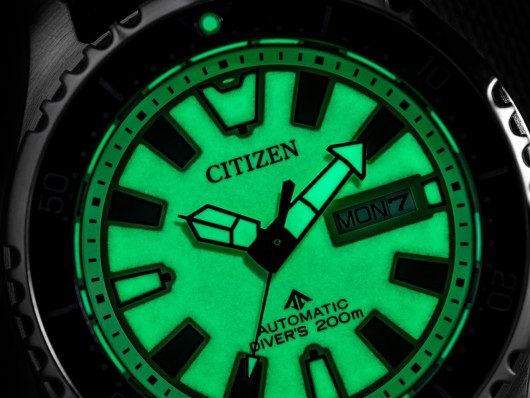 One of the popular dial variations of the original Promaster NY004 from 1989 was the one with a fully lumed dial. Unlike most watches that have lume applied on hour markers for time telling in the dark, these watches had lume applied instead, on the dial. Hour markers were typically not lumed so that they would contrast against the generous amount of lume on the dial, and so be the points by which a user could reference to tell the time.

A fully lumed dial is comparatively rare, with only a few brands having made watches with them before. CITIZEN has always been one of the brands known for producing this type of dial, and so, for aficionados of lumed watches that wanted the ultimate visibility of the time in the dark, the original Promaster NY004 was a popular option.

CITIZEN introduced this dial again in 2018 with the NY0080-12X, and again this year with the new Citizen Asia Limited Promaster NY011 series.

The fully lumed variant of the Citizen Asia Limited Promaster NY011 series is three times brighter than that used in the previous Promaster NY008 series. Not only that, because the dial is bigger, there is more lume overall, which makes the brightness that can be experienced under low light even more apparent. This particular model is limited to 2,000 pieces, with each piece carrying its own series number on the case-back.

The watches will be available towards the middle of 2020 in the following markets -Singapore, Malaysia, Thailand, Vietnam, Indonesia, China, Taiwan region, Hong Kong SAR, Philippines, and Cambodia. 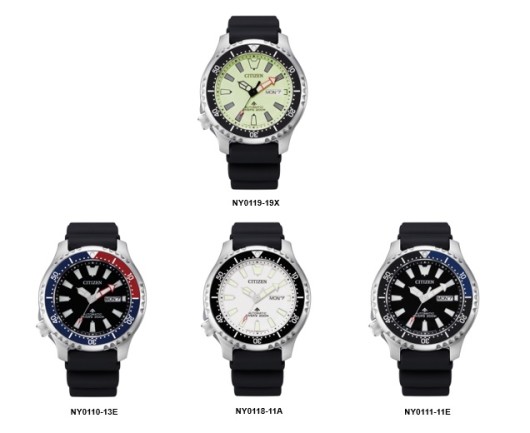 CITIZEN WATCH is a true manufacture d'horlogerie with a comprehensive manufacturing process that extends from creating a watch's individual components to its final assembly. The company operates in more than 140 countries and regions around the world. Since its founding in 1918, CITIZEN have held the belief of "Better Starts Now" -- that is, no matter who you are and what you do, it is always possible to make something better, and now is the time to start doing it. Sharing this belief, we have made watches, invented and improved technologies and explored the future of watches such as our proprietary light-powered Eco-Drive technology and state-of-the-art satellite-synchronized timekeeping.

* The final design and specifications are subject to change without notice.