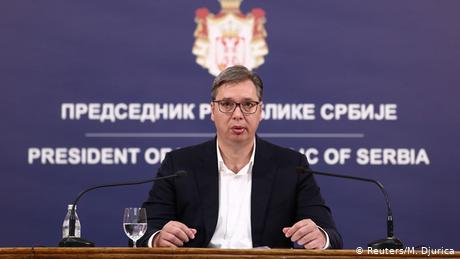 Serbian President Aleksandar Vucic has enrolled in a sports college to pursue his childhood dreams of becoming a basketball coach.

"For the second time in my life I became a student... in a wish to become a basketball coach for kids," Vucic wrote on Saturday. "You would not believe how happy I am that after many years I am starting to realize my boyhood dreams."

The Instagram post was accompanied by a picture of Vucic holding a stamped student ID booklet from a Belgrade sports and health college with a miniature basketball sitting on his presidential desk.

Vucic, a law graduate, told a local newspaper in June that his unfilled wish was to become a basketball coach.

"There is nothing nicer than spending Saturdays and Sundays with young players, children whom you can teach something," he told Serbian daily Kurir, adding that his ultimate dream is to train children from a "small club."

Coaching through the crisis

Vucic became prime minister in 2014 and then assumed the presidency in 2017. Like many in his country, Vucic had always been a big fan of basketball and soccer.

Citizens took to the streets on July 7 in frustration over the government's handling of the coronavirus pandemic. Vucic had announced the capital would be placed under a three-day lockdown following a second wave of confirmed coronavirus infections.

The demonstrations continued despite Vucic suspending his plan to enforce the lockdown. Instead, his government banned gatherings of more than 10 people and made face masks mandatory indoors.

Serbia, a country of nearly 7 million people, has suffered 461 deaths from COVID-19 and nearly 20,500 infections, according to data from Johns Hopkins University.