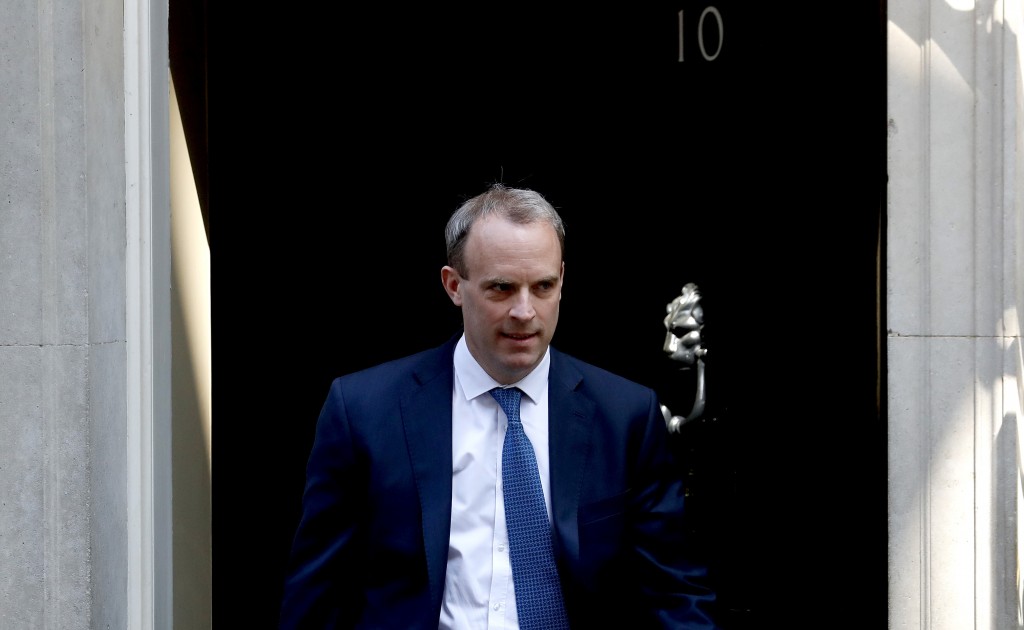 LONDON (AP) — Britain’s foreign secretary hinted Sunday he may move to suspend the U.K.’s extradition arrangements with Hong Kong, and accused Beijing of “gross and egregious” human rights abuses against its Uighur population in China’s western province of Xinjiang.

In response, the Chinese ambassador to Britain warned that China will deliver a “resolute response” to any move by Britain to sanction officials over the alleged rights abuses.

Tensions between the U.K. and China have heightened over several issues, including China’s alleged rights violations against the Uighur minority population and a new, sweeping national security law imposed on Hong Kong. Britain’s decision this week to prohibit Chinese telecommunications giant Huawei from involvement in the U.K.’s superfast 5G mobile network has further frayed bilateral relations.

Foreign Secretary Dominic Raab said Sunday that Britain’s government has reviewed extradition arrangements with Hong Kong, and that he plans to make a statement in parliament on Monday over the topic.

Earlier this month Australia suspended its extradition treaty with Hong Kong in response to China’s imposition of security legislation on the semi-autonomous territory. Critics see the new law as a further erosion of the rule of law and freedoms promised to the former British colony.

Raab added that while Britain wants good relations with China, it could not stand by amid reports of forced sterilization and mass education camps targeting the Uighur population in Xinjiang.

“It is clear that there are gross, egregious human rights abuses going on. We are working with our international partners on this. It is deeply, deeply troubling,” he told the BBC.

Liu Xiaoming, the Chinese ambassador, denied there are concentration camps in Xinjiang during an interview with the BBC and insisted there are “no so-called restriction of the population.” He said there are many “fake accusations” against China.

Beijing was ready to respond in kind should Britain impose sanctions on Chinese officials, Liu added.

“If the U.K. goes that far to impose sanctions on any individuals in China, China will certainly make a resolute response to it,” he said. “You have seen what happened between China (and) the United States … I do not want to see this tit-for-tat between China-U.S. happen in China-U.K. relations.”