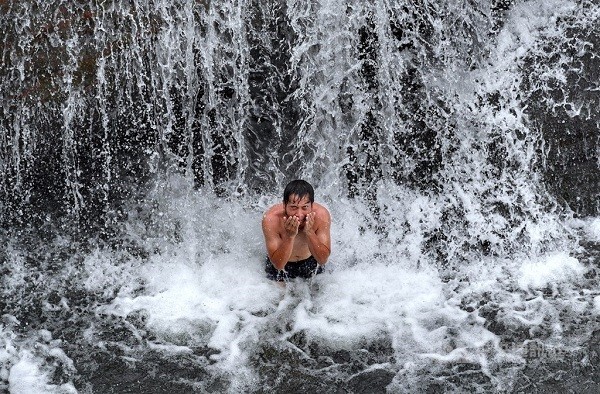 The mercury hit 39 degrees Celsius in Taipei City at around 1 p.m. Sunday, the second hottest temperature recorded since 1897, when the weather station was established in the city, according to the Central Weather Bureau (CWB).

It was also the highest ever temperature recorded in Taipei in July, the CWB said.

According to the CWB, the highest temperature recorded in the city was 39.3 degrees Celsius on August 8, 2013.

Earlier the same day, the CWB issued an "orange" heat alert for Taipei and eight other cities and counties in Taiwan, which warns of a one-day temperature high of 38 degrees or a maximum of 36 degrees Celsius for three consecutive days.

As of 1:30 p.m., the highest temperature recorded in Taiwan was 39.3 degrees in Nantou County, CWB data showed.

However, that temperature will not be officially recorded because the Nantou weather observation station is prone to errors due to radiant heat reflected off a concrete pavement next to measuring instruments, the CWB said.

Meanwhile, as hot weather prevails in Taiwan, the CWB also issued heavy rain warnings for mountainous areas in 14 cities and counties due to a strong convection cloud system in the afternoon.

These include the cities of New Taipei, Taoyuan, Taichung,Tainan, Kaohsiung, and the counties of Hsinchu, Miaoli, Nantou,Yunlin, Chiayi, Pingtung, Yilan, Hualien and Taitung.

A heavy rain warning is issued when accumulated rainfallis expected to exceed 40mm in one hour or 80mm in 24 hours.