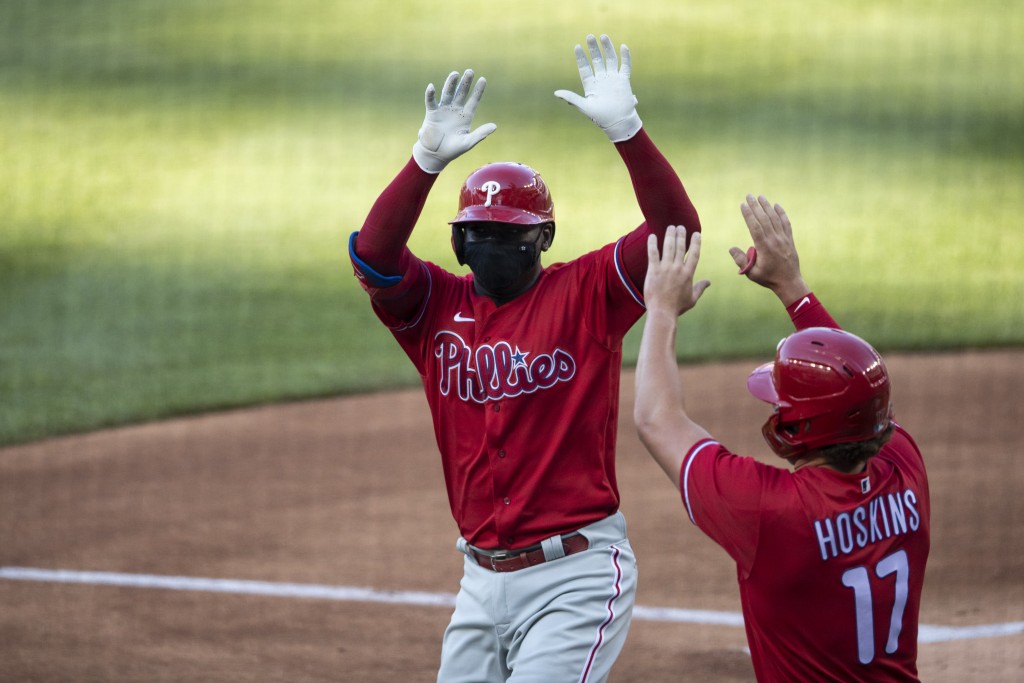 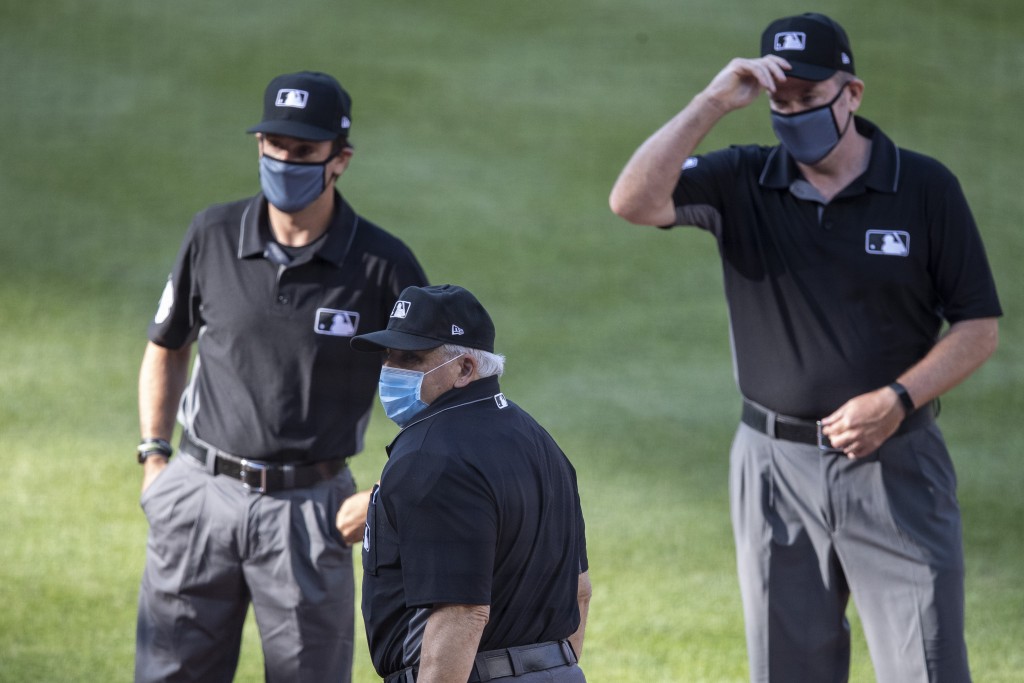 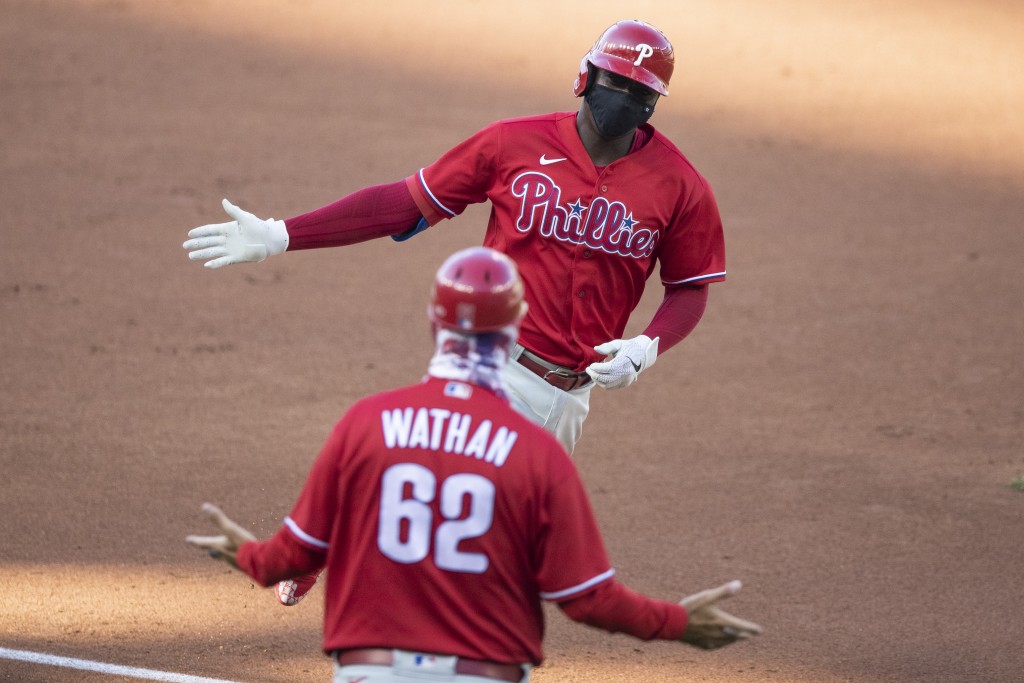 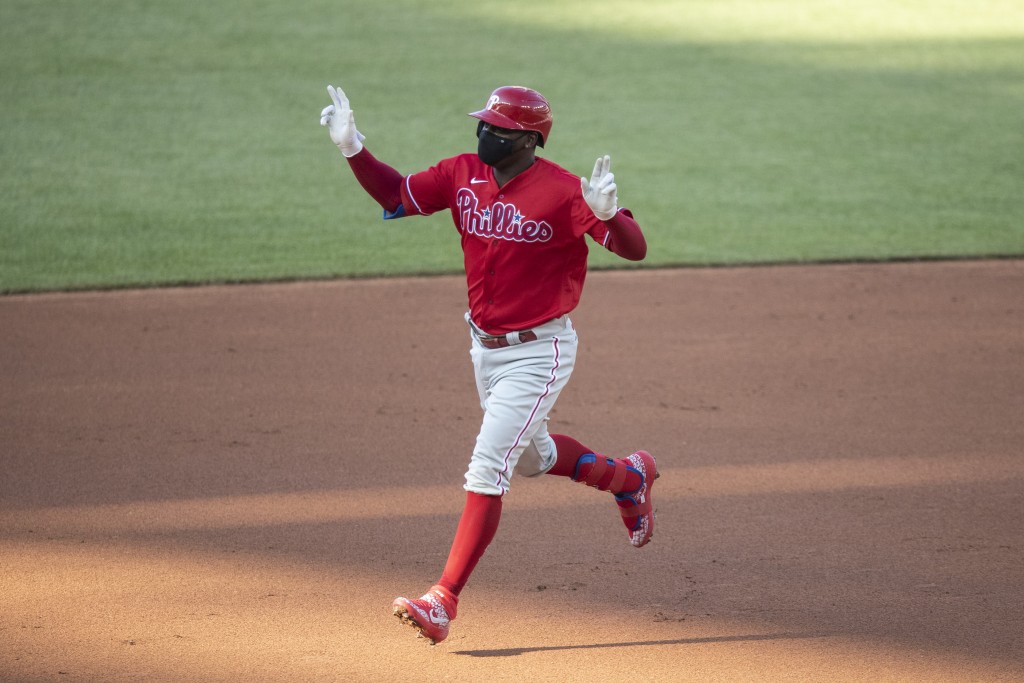 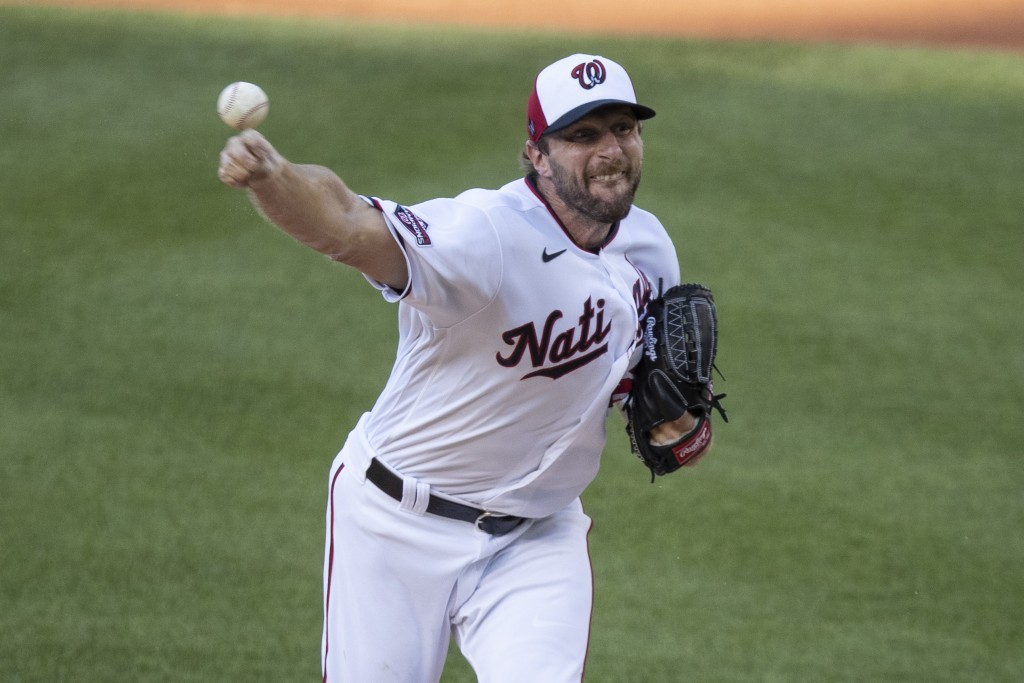 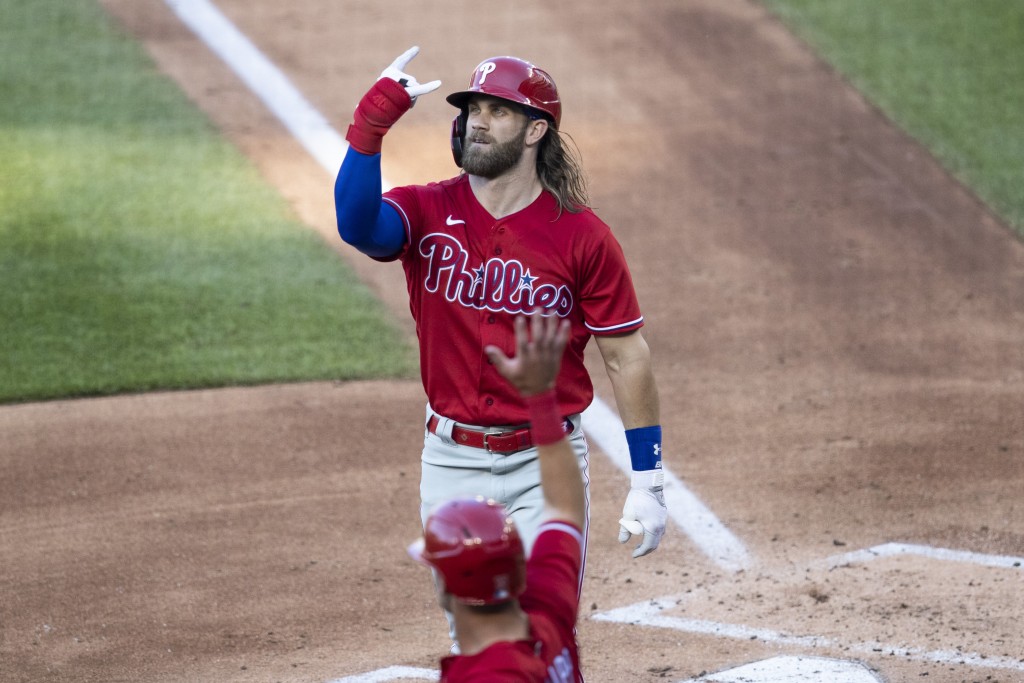 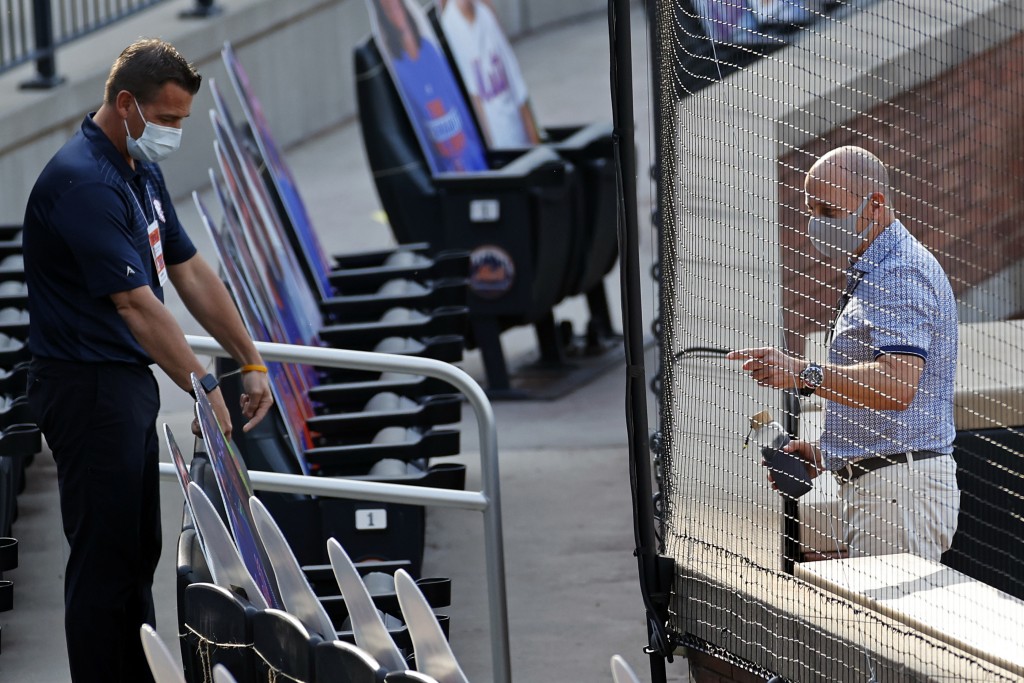 NEW YORK (AP) — Didi Gregorius watched over the top of his face mask as his drive off Washington ace Max Scherzer sailed into empty outfield seats.

Fake cheers — meant to encourage the hometown Nationals — accidentally piped through the stadium as the Philadelphia Phillies shortstop rounded the bases. After touching home plate, he pantomimed air-fives to teammates.

Exhibition games in Washington, New York and Pittsburgh on Saturday gave Major League Baseball its first look at coronavirus-era games — fake crowd noise and all. Still, for clubs limited to practices and intrasquads in their own ballparks for the past two weeks, Saturday stood as an important mile marker as baseball tries to start a shortened 60-game season next Thursday amid a pandemic.

“In some ways, this is very much a dress rehearsal for the new world we’re in,” Yankees manager Aaron Boone said before an exhibition at the crosstown Mets.

No fans rushed off the 7 train in Flushing at Citi Field, and none hurried over the Clemente Bridge in Pittsburgh — not with MLB planning to start this pandemic-shaken season at empty stadiums. At Nationals Park, two people watched from a building balcony far beyond the left field wall.

Umpires wore face masks, as did some players. Backups watched from the stands to maintain social distancing in dugouts. They all tried to follow safety protocols, including a ban on licking fingers or spitting.

Gregorius drilled a three-run homer in the first inning in Washington, the first big fly by a player in any of Saturday's games.

The 30-year-old first-year Phillie is one of a handful of players who has said he'll wear a mask full-time this season. Gregorius has a chronic kidney disorder that makes him high risk for the coronavirus.

Scherzer is expected to throw the first pitch of the regular season when the Nats host new ace Gerrit Cole and the Yankees on Thursday night. The right-hander struggled in his final tuneup, also allowing a three-run shot to former teammate Bryce Harper.

For their first exhibition game since the virus outbreak shut down spring training in mid-March, Yankees players took a team bus from the Bronx to Queens to meet the Mets — no subways for this series.

Signs of the times were certainly there. Some coaches hit fungoes in face masks, and the usual high fives and hugs between opponents around the batting cage were replaced by elbow taps and distanced chats — including one between Yankees general manager Brian Cashman and Mets counterpart Brodie Van Wagenen.

With no fans filing in for first pitch, nearly 1,000 cardboard likenesses of Mets supporters were set up behind home plate. The team plans to have 5,000 in place by opening day.

Reserve players watched from under large awnings build behind both dugouts. Mets backups gave a standing ovation to scheduled starter Rick Porcello as he returned from the bullpen, then started a chant of “Let's go, Mets!”

The Cleveland Indians loaded into three buses Saturday for the 2-hour-plus drive to Pittsburgh to take on the Pirates. Manager Terry Francona said the team adhered to social-distance guidelines — and staggered arrival times — for the team’s first trip since camp re-opened.

“I think it’s a good experience for all of us,” he said. “We’re not used to getting on a bus and get your temperature taken and things like that, so it’s good to go through that."

In Washington, a moment of silence was held for late civil rights trailblazer John Lewis. Players stood socially distanced for the national anthem — an acoustic rendition by the U.S. Army Brass Quintet performed before Game 4 of last year's World Series and replayed on the video scoreboard.

“Definitely has a different feeling to it,” Nationals center fielder Michael A. Taylor said.

The Blue Jays were denied approval by the Canadian government to play in Toronto due to the cross-border travel required.

The team’s alternate site for home games is its training facility in Dunedin, Florida, one of the states hardest-hit by the virus. Players have said they preferred to play in Toronto.

The Blue Jays are scheduled to start the season July 24 at Tampa Bay. Their home opener was set for five days later against Washington.

A pair of All-Stars remain uncertain for opening day after missing the start of summer camp due to positive coronavirus tests — Atlanta’s Freddie Freeman and the Yankees’ DJ LeMahieu.

Freeman was at Truist Park on Friday about an hour after receiving his second negative test for the coronavirus, earning him medical clearance to return. On Saturday, the four-time All-Star revealed he had a high temperature of 104.5 degrees early on and was fearful of losing his life.

“I said a little prayer that night,” Freeman said.

LeMahieu participated in his first practice Friday after testing positive at his home in Michigan last month. The three-time Gold Glove winner said it was “shocking” to get the result because he had no symptoms.

Outfielder Dwight Smith Jr. rejoined the Baltimore Orioles after missing the start of summer camp following a positive test for COVID-19 and hopes to play in next week’s opener at Boston.