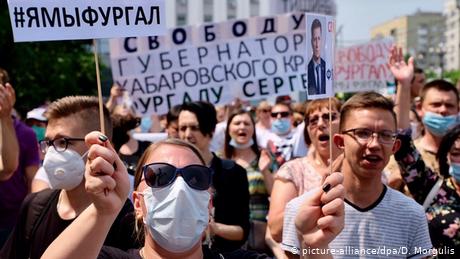 At least 15,000 people in the Russian city of Khabarovsk, on the border with China, took to the streets on Saturday. Protesters have been demonstrating for a week, in a rare show of defiance against the Kremlin.

Saturday's large rallies were in rejection of the sudden arrest of popular governor Sergei Furgal, who has been held in Moscow since July 9 after being accused of murdering several businessmen years ago.

The demonstrations come after President Vladimir Putin this month oversaw a controversial vote that allows him to extend his hold on power until 2036.

Among the protesters were young people, the elderly and women with children. While many expressed their support for the arrested politician, some of the protest signs and chants were distinctly anti-Putin.

Protesters carried placards reading "Freedom for Furgal!" and chanted, "As long as we are united we are invincible," as passing cars honked horns in support. Others shouted, "It's our governor! And we will defend him!"

Furgal, a member of the nationalist Liberal Democratic Party, was elected governor in 2018, defeating a Kremlin-backed incumbent. He has denied the charges leveled against him.

During his tenure, Furgal became widely popular, earning the moniker "the people's governor." He cut his own salary, ordered the sale of an expensive yacht the previous administration bought, engaged in dialogue with protesters when rallies took place and significantly reduced flight fares for residents in remote areas.

Though he and his party competed with Putin's party, Furgal is largely ideologically in tune with the president's policies.

Still, his rising popularity made him an unusually beloved figure who was not associated with Putin. Many protesters have claimed that the charges against him are politically motivated, fueling criticism towards the Kremlin.

The protests were not authorized by Russian authorities, and they are the largest ever to have taken place in Khabarovsk, a city of nearly 600,000.

Kremlin spokesman Dmitry Peskov said earlier this week that the situation in Khabarovsk was "not standard." The Russian government has not yet appointed an acting governor 11 days after Furgal's arrest.