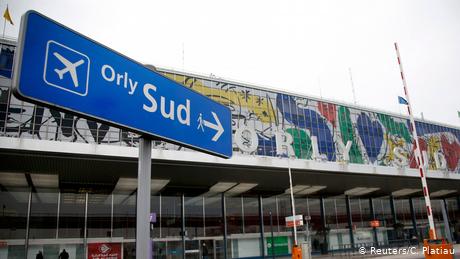 Terminal 4 of Paris' Orly's airport was evacuated on Saturday morning after a bus caught fire directly outside the building, the newspaper Le Parisien reported.

Social media footage showed flames and smoke billowing from the bus as hundreds of travelers were arriving for their flights.

The driver of the bus, which transports passengers between Paris and the airport, made an emergency stop in front of Terminal 4 around 8:45 a.m. local time (0645 UTC/GMT) on Saturday after he detected the smell of smoke.

Firefighters and airport personnel arrived immediately and set up a security perimeter around the bus.

Three blasts, a bus in flames

"First we saw smoke and the driver with a fire extinguisher, so we thought it was just a small fire," an airline employee who was working at the time of the fire told le Parisien.

"Suddenly, flames appeared under the bus and help began arriving from all sides. We pushed the passengers away from the [airport] windows. Then there was a blast — a tire exploded — and the windows of the bus also began exploding. Then there was a second and third blast. And the fire alarm system at Orly went off....That's when we evacuated everyone outside."

"In view of the significant level of smoke, it was decided to temporarily evacuate the terminal," a spokesman for the Paris fire department said.

Around 300 passengers with their luggage waited outside of the terminal. From there they had a clear view of the bus, which had become engulfed in flames.

Around 30 firefighters were involved in extinguishing the blaze.

Le Parisien reported that Terminal 4 resumed normal operations at 10:34 a.m. after the fire had been extinguished and officials had confirmed there was no damage to the building.

No passengers missed their flights, the airport association Aéorports de Paris said, though the fire caused several flights to be delayed.

In a separate incident, a fire broke out insideFrance's Nantes Cathedral on Saturday morning.