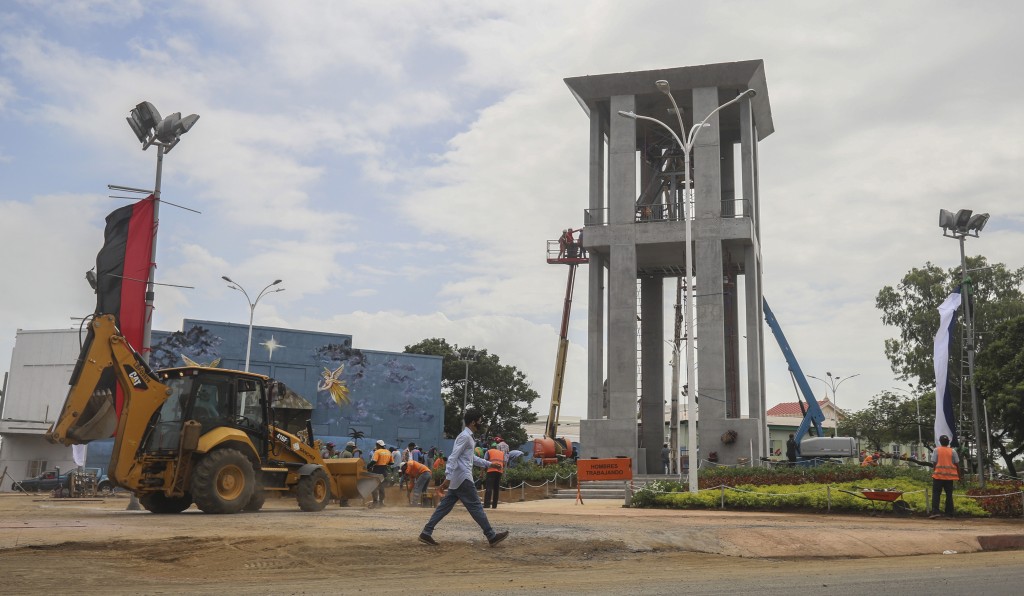 MANAGUA, Nicaragua (AP) — Nicaraguan President Daniel Ortega's government is being deterred by the coronarvirus from holding the usual mass celebration to mark the victory of the country's revolution July 19. Instead, it will unveil a new addition to its collection of monuments in the old city center of Managua on Friday.

The 3½-ton Peace Bell will toll atop a 55-foot (17 meter) concrete tower not far from a grove of “Trees of Life,” the huge abstract steel trees painted in garish colors that were sowed about the capital by Vice President Rosario Murillo, wife of the former revolutionary leader Ortega. Flower gardens and benches will surround the tower.

In one of the few signs that Ortega’s government is beginning to take the pandemic more seriously, this will be the first time in 41 years that throngs of people won’t gather for the July 19 anniversary of the downfall of dictator Anastasio Somoza. Instead the bell is to be inaugurated Friday and a virtual concert will be broadcast Saturday night.

For months the government downplayed the coronavirus, keeping schools open and encouraging mass events while the rest of the world called for social distancing. International health organizations have repeatedly urged the government to take action while the public witnessed “express burials” and spreading illness.

Some have criticized the bell project as a whim by Murillo at a time that Nicaragua's already struggling economy has been paralyzed by the pandemic.

“It’s totally irresponsible in the conditions of poverty that Nicaragua lives and in the face of this pandemic,” Larios said. “Those millions of cordobas (the local currency) should have been used to help people affected by the coronavirus. It’s a whim by the current leaders for their political patronage.”

For her part, Murillo says the bell honors “peace, love, family, community, struggles and victories, always prioritizing peace and life that are always going to be remembered and will be present through the beautiful ringing of this bell.”

The vice president says the bell will toll every 30 minutes between 6 a.m. and 10 p.m., while at 6 a.m., noon and 6 p.m. it will toll the call to prayer for the Roman Catholic devotion, The Angelus.

Murillo’s projects have been the target of criticism and vandalism before. Since Ortega returned to power in 2007, Murillo has set about decorating the capital. The 140 or so Trees of Life were favorite targets in popular protests that erupted in April 2018. Dozens were felled around Managua, their light bulbs removed as souvenirs.

Fidel Moreno, the capital’s secretary general, said the tower will complement the wider renovation of the city’s old center, which was badly damaged and partially abandoned after an earthquake in December 1972.

However, city council member Sellin Figueroa told local media that the bell had not been among the 286 projects the city council approved for this year.

“We don’t know who gave the order to build this bell tower, which doesn’t exist in the annual municipal investment plan, nor in the general budget of the republic,” Figueroa said. “It’s more a whim, a symbol of illegality and the abuse of authority of this administration.”

The bell tower rises amid a swirl of symbolism.

July 17 is known as the Day of Happiness, since that was the day Somoza fled the country, ending about four decades of rule by his family. Two days later, the leftist Sandinista guerrillas took power.

The first stone for the tower was laid May 18, the birthday of nationalist hero and namesake of the Sandinista party, Augusto C. Sandino, who fought the U.S. military intervention and was later executed under Somoza’s orders. A phrase famously ascribed to Sandino and frequently employed by Murillo — “always further” — will be engraved on the bell.

The tower is on Bolivar Avenue, which Ortega renamed “from Bolivar to Chávez” in honor of his friend Hugo Chávez, the Venezuelan president who died from cancer in 2013 and whose movement idolizes South American independence hero Simón Bolívar.

The bell also stands near the Monument to the People’s Combatant, which critics deride as the “Hulk” for its resemblance to the popular comic figure. That monument was also inaugurated on July 17 during Ortega’s first presidency in 1985. Explosives were once used unsuccessfully to try to destroy it.

Nearby is the plaza where, on an enormous platform, the Sandinistas normally celebrate the revolution’s victory each year, waving red and black flags and flanked by two dozen Trees of Life that survived the 2018 protests.

“That does not take the enthusiasm from our hearts,” Murillo said this week. “To the contrary, we do what we have to do and how we have to do it in these circumstances.”