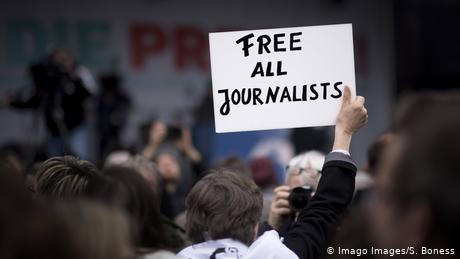 Turkey has long since ceased to be a constitutional state. It still pretends to be one, but instead, arbitrariness reigns — the arbitrariness of President Recep Tayyip Erdogan and his government. The verdict handed down to Deniz Yücelclearly demonstrates this once again. The sentence of two years, nine months and 22 days imprisonment was a punishment for his journalistic work.

Deniz Yücel now ranks among the dozens of journalists convicted of alleged terrorist propaganda, and the more than 30,000 people in Turkey who have been and are still being tried for insulting the president. The number of people being investigated on the same charge is more than 100,000.

The Yücel case is one of the most striking examples of how the Erdogan government instrumentalizes people and situations for its domestic or foreign policy, as required.

Deniz and I met in October 2016 at the news channel IMC TV. We did not know then how severe the attack on freedom of speech would become. President Erdogan had described the failed coup attempt of July 2016 as a gift from God — and immediately started to silence all critical voices, especially in the media. Our station was closed down for good that day; we were accused of endangering the security of the state. That day, Deniz wrote about us in the German daily newspaper Die Welt — and a few months later we Turkish journalists were reporting about him.

An arrest warrant was issued for Deniz in February 2017, for looking at the hacked emails of Berat Albayrak, the Turkish economics minister and son-in-law of the president, online. The emails concerned dubious connections between Albayrak and Turkish media companies. In police custody, investigators only asked Deniz questions about these e-mails. However, when the public prosecutor interrogated him two weeks later, the situation had suddenly and radically changed. The hacked e-mails were no longer of interest — instead, he was questioned about his interviews and articles about the Kurds and the banned Kurdish Workers' Party, the PKK.

A clear message to foreign journalists

The government had realized that Deniz Yücel was an important and well-known journalist in Germany, with both a Turkish and a German passport. It calculated that he could be taken as a political hostage and exchanged for Gülen supporters, whom Erdogan blames for the coup, and other dissidents who had sought refuge in Germany. Erdogan confirmed this strategy in a television interview: "If we have one of them [an EU citizen or a German] in our hands," he said, "we will not extradite him. As long as I am in office — never." He called Deniz Yücel "Agent Terrorist," and claimed that he had close contacts with the PKK.

President Erdogan is still in office. But Deniz Yücel is no longer "in his hands" — and Erdogan will not get hold of him, either. In February 2018, the German government manged to get him released – Deniz is in Germany. For Erdogan, this meant he was one-nil down. Perhaps this verdict is an attempt to even the score. It sends a clear message to foreign media outlets and their representatives in Turkey that, in this country, journalism can always be deemed to be a crime, depending on what the government requires.

Banu Güven is a Turkish journalist and television presenter. She regularly writes columns for DW's Turkish Service, and produces video columns for WDR Cosmo. In 2017 she received the Nannen Prize special award for outstanding journalistic achievement for her work on behalf of press freedom in Turkey.