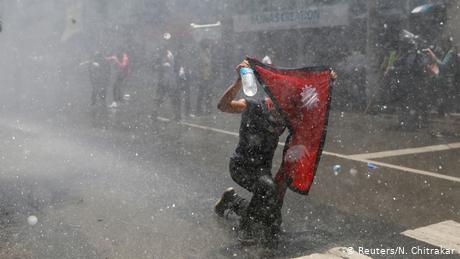 The COVID-19 health crisis has dealt a heavy blow to Nepal, with many Nepalis inside and outside the country losing their jobs. The landlocked South Asian nation has so far recorded 17,344 infections of the novel coronavirus, with 39 deaths and 11,249 recoveries.

When it comes to Nepalis residing outside the country, 29,619 infections have been registered across the world, particularly in places like the UK, the US and the Gulf states, where over 2 million Nepali migrant workers are based.

In Qatar alone, at least 20,600 Nepali workers have so far been tested COVID-19 positive, with seven deaths, according to data compiled by the Non-Resident Nepali Association. Around 400,000 Nepalis are employed in the Gulf state, mostly on construction sites of buildings that are being readied for the football World Cup 2022.

Many Nepalis also work in India's vast informal sector, putting them at risk of exposure to the virus.

Most Nepali workers abroad are employed as unskilled or semi-skilled labor. The global health emergency and the resulting economic crisis have put these workers' livelihoods at risk, with many of them facing job losses and wage cuts. Reports suggest that hundreds of thousands of workers who have lost their jobs in places like the Gulf region and Malaysia are looking to return home.

Over the last decade, Nepal issued labor permits for over 3.5 million people to work abroad. But the exact number of Nepali migrants in other countries is unclear. A significant section of Nepali migrant labor is employed in India, although no official records or exact figures are available as the two countries share an open border and Nepalis require no visa or work permit to work in India.

Many Nepalis also migrate to third countries via India, making it more difficult to draw the true picture of migration from Nepal. A report by the South Asian Watch on Trade, Economics and Environment says that the number could be up to 2.8 million.

Speaking to a parliamentary committee in May, Nepal's foreign minister said that as much as 10-30% of these workers could lose their jobs and return home. Over 100,000 migrant workers from Qatar, Kuwait, Malaysia, Bahrain, Oman and the UAE have called for the Nepali government to immediately repatriate them. About 30,000 of them have already been brought back to the country.

If the regular flights resume from early August, as planned, more Nepalis are likely to return home, says Suman Ghimire, spokesperson for the Ministry of Labor, Employment and Social Security.

Nepal's remittance-dependent economy is likely to be hit hard by the job losses, observers say, adding that they will also put increased pressure on the domestic labor market.

A recent survey conducted by the Institute for Integrated Development Studies (IIDS) concluded that the country could see a decline in remittances in the range of 15-20% this year. In 2018, Nepal received about $8.1 billion (€7.09 billion) in remittances, which accounted for as much as 28% of the nation's GDP, according to the World Bank.

According to the IIDS, some 60% of the nation's labor force have lost their jobs since late March, when the country had imposed a nationwide lockdown to contain the spread of the coronavirus.

The pandemic has shut economic activity, disrupted supply chains and threatened the survival of small and informal enterprises. It has also shuttered schools and colleges, and brought the booming tourism industry to a grinding halt.

About half a million young people are entering the nation's labor market every year, but the economy has been able to create jobs for just 10% of them. The rest are forced to pursue self-employment, remain jobless or migrate abroad in search of work.

Hari Roka, a former member of parliament, said Nepal is going to face a huge problem if the employment situation is not handled effectively.

"If we can't manage the job for them, this would be a catalyst for a social-political crisis," he warned, adding that "an existential threat for the country's new federal setup is looming large."

Lok Ranjan Parajuli, political analyst, says the trajectory of Nepal's economic and job growth will rely more on global factors than local ones, particularly on when there will be a rebound of the global job market and the development of a vaccine for COVID-19.

"Nepal's safety valve has been the outflow of unemployed youths seeking foreign jobs. This has not only ensured remittances but also managed unemployment rates," he told DW. "If the foreign job markets bounced back and Nepal's safety valve is resumed within a few months, then things would return to normalcy gradually."

But if the global recovery takes longer, public frustration at increased job losses and unemployment in Nepal could mount and trigger widespread protests against the government led by Prime Minister KP Sharma Oli, who has already been facing criticism for his administration's ineffective handling of the health emergency and alleged corruption scandals.