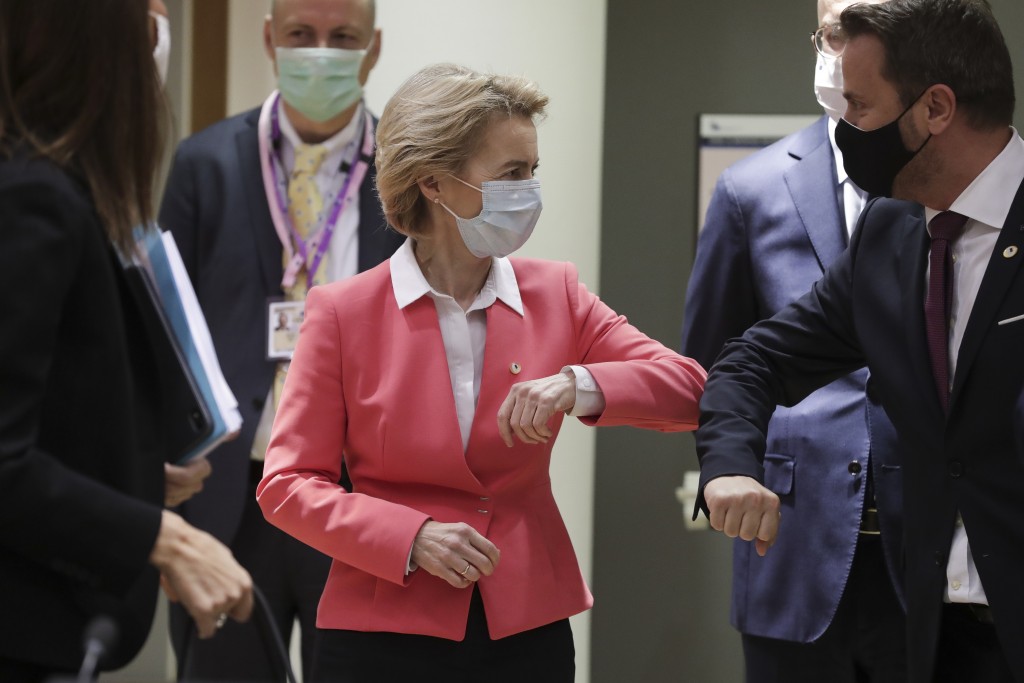 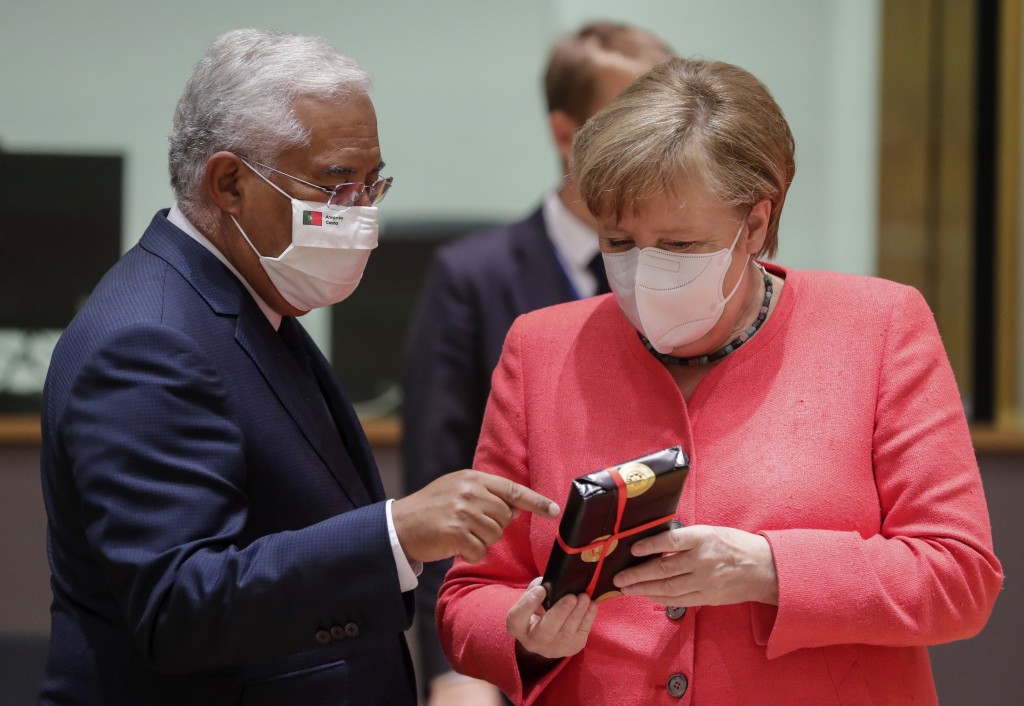 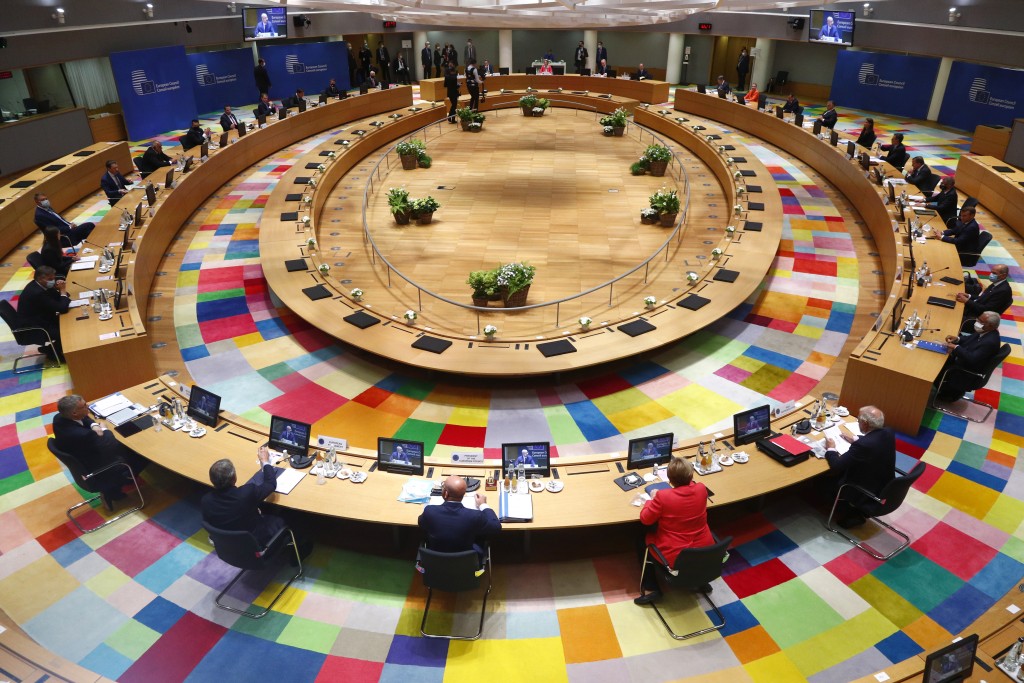 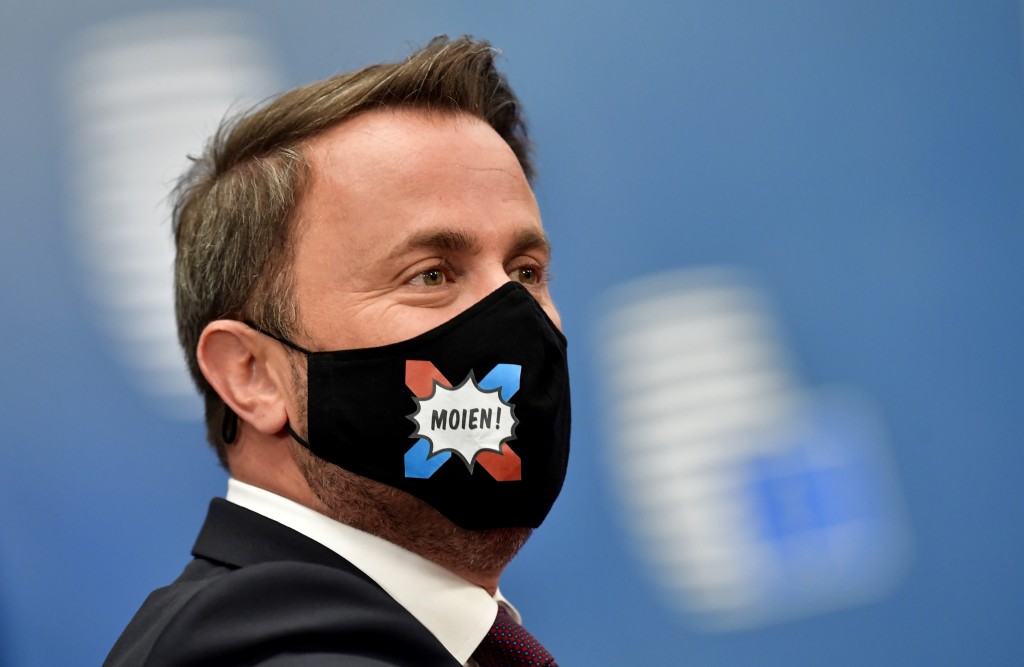 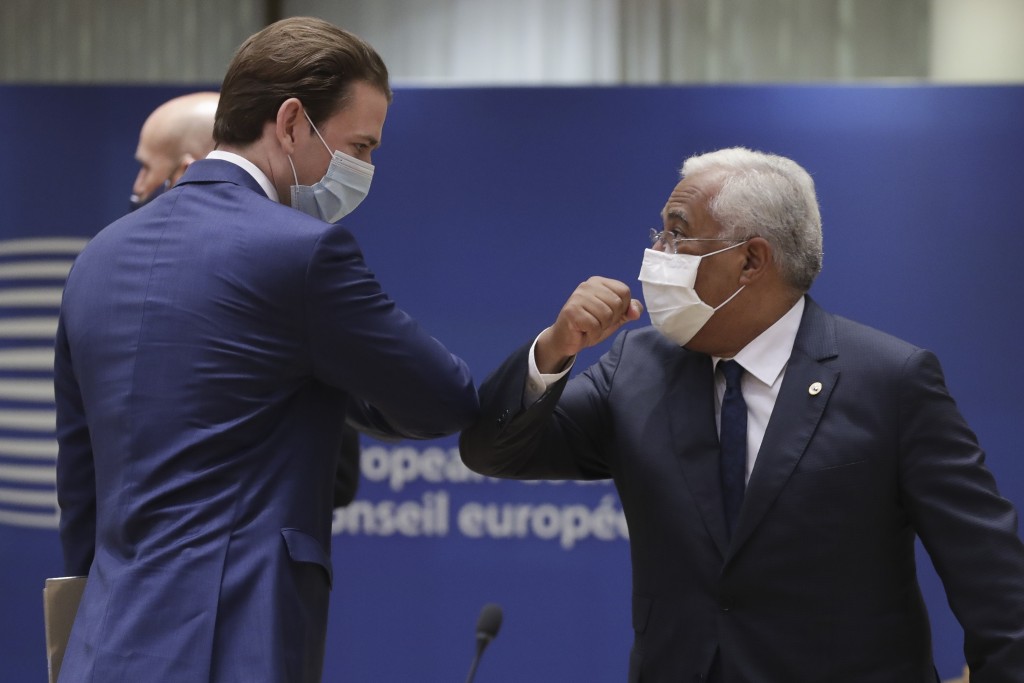 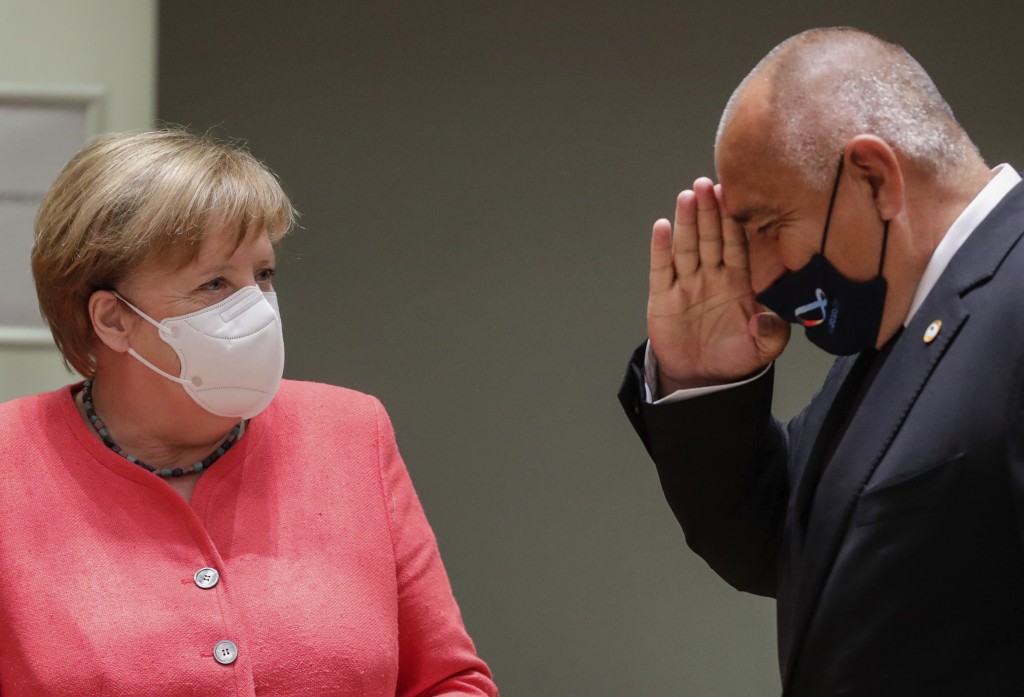 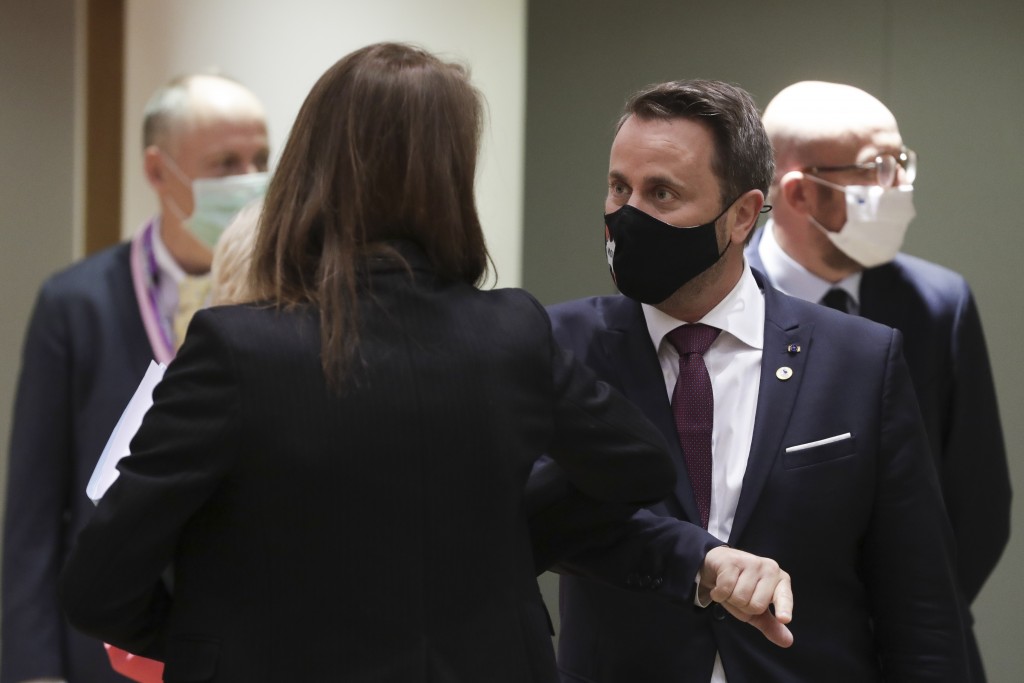 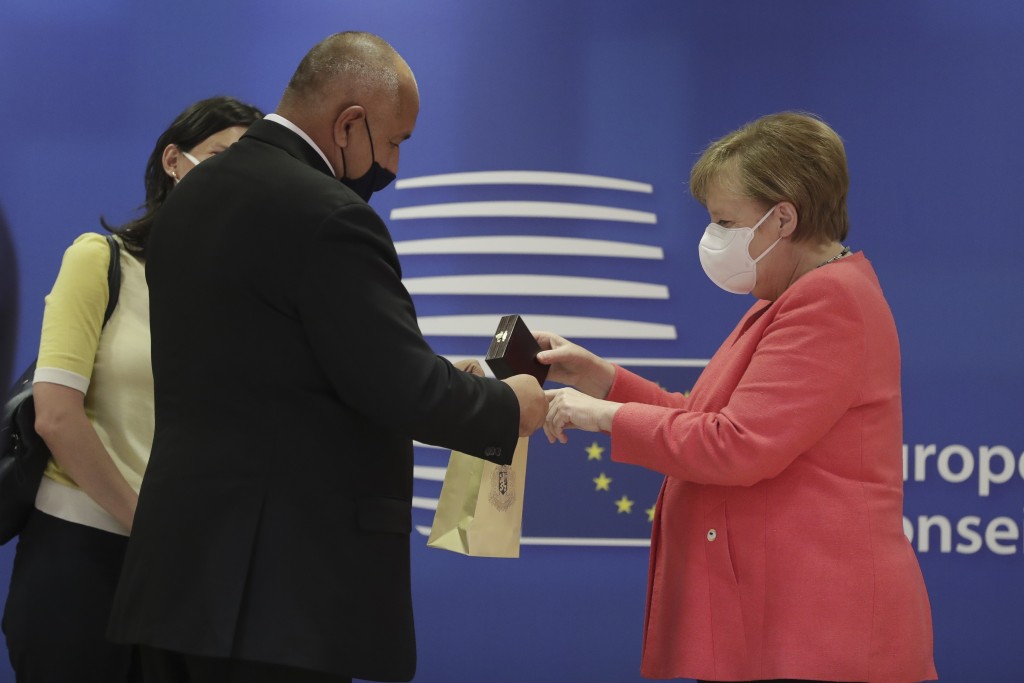 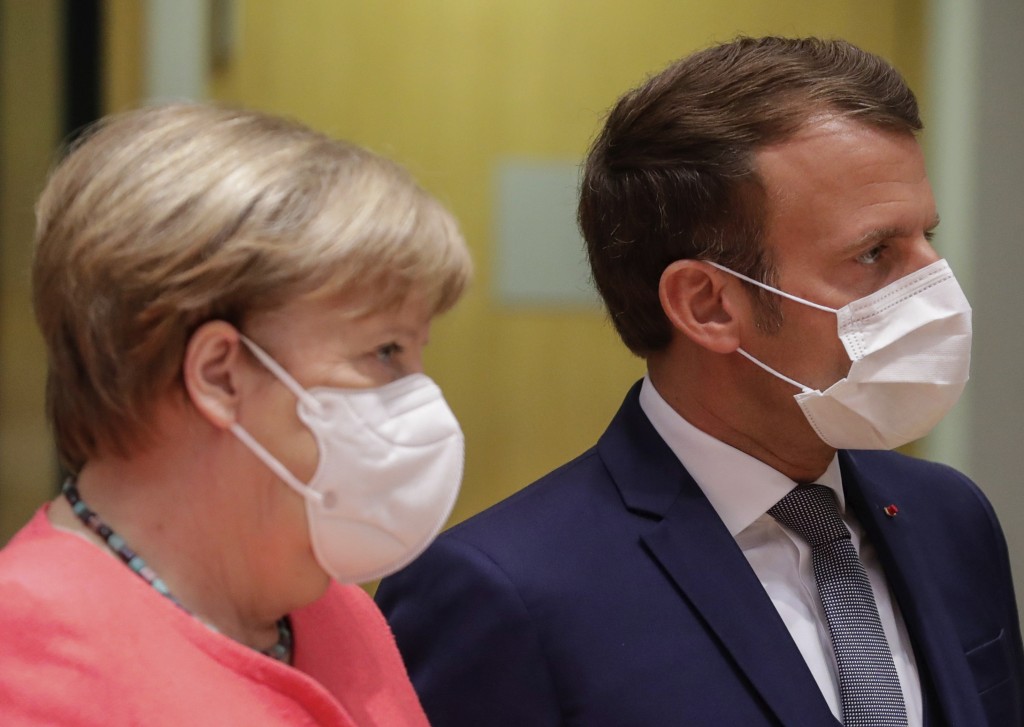 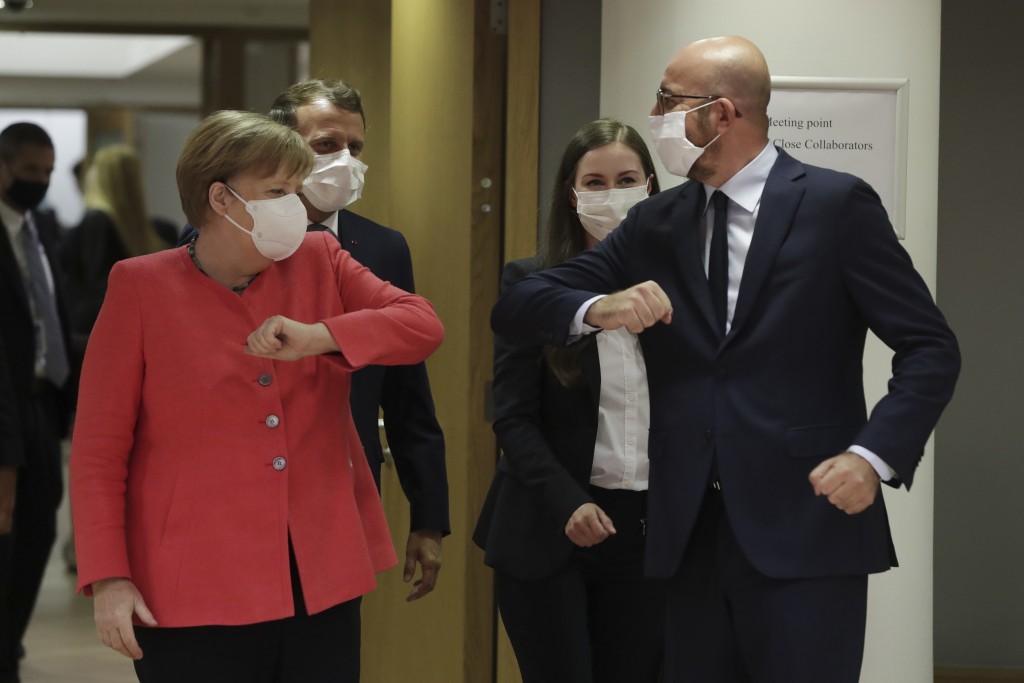 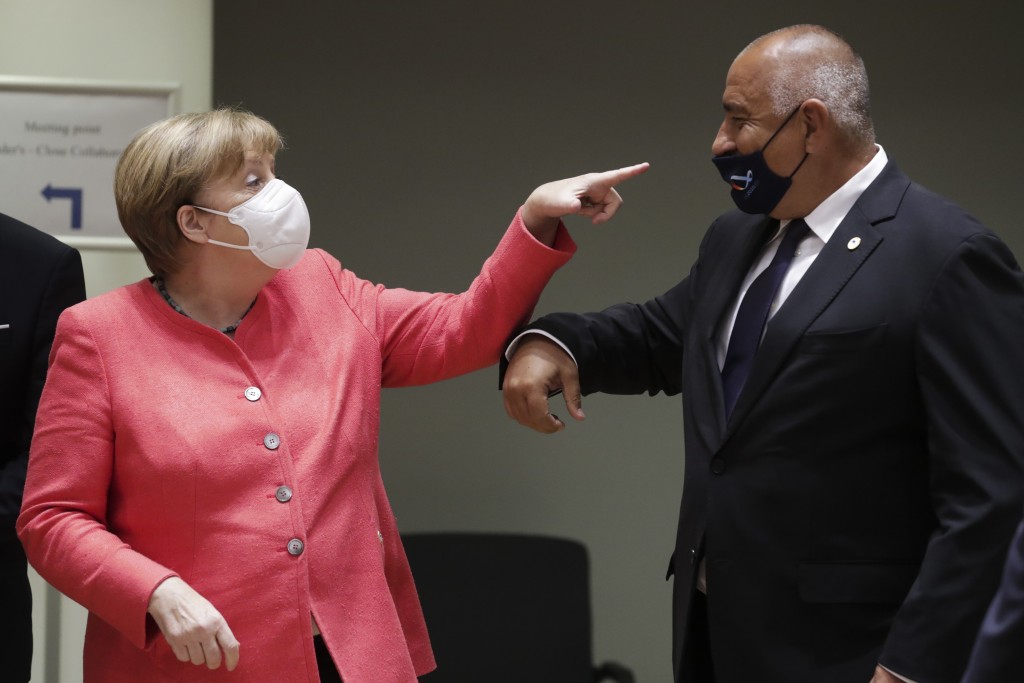 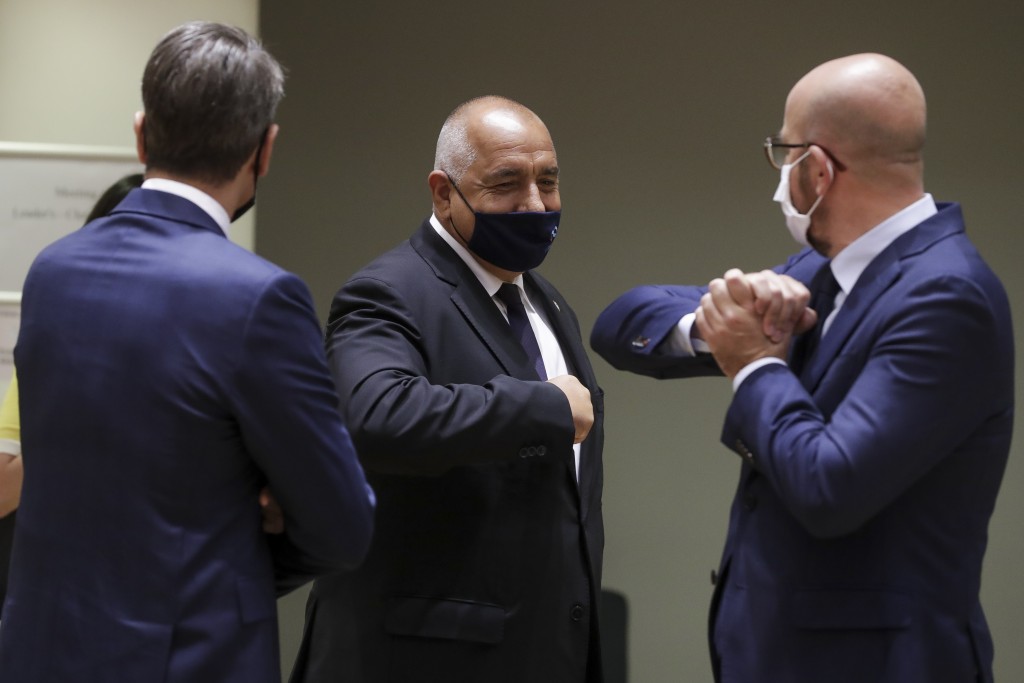 BRUSSELS (AP) — At the start of one of the most daunting and divisive summits in recent history, the atmosphere among the European Union leaders was downright giddy.

Blame the coronavirus pandemic. With all kinds of masks, social distancing rules, and new ways of greetings, some of the leaders reveled in the novelty of it all as they met in person for the first time since February.

German Chancellor Angela Merkel, so often a study in gravity at such meetings, was all merriment when she saw Bulgarian Prime Minister Boyko Borissov with his mask slipped. With her face drawn in fake shock and horror, she pointed at his exposed nose to show he had committed a serious COVID-19 faux pas.

Other leaders were trying out various versions of the elbow bump, with Luxembourg Prime Minister Xavier Bettel almost turning it into an elbow duel. But there was no mistaking his good nature since he had “Moien!” — the Luxembourgish for “Good morning!" — printed on his mask.

The apparently carefree mingling and schmoozing disguised the reason they had all gathered in a cavernous Brussels meeting room instead of holding their summit by videoconference: The issues they are grappling with are so historic and divisive they need to look one another in the eye, and have face-to-face talks as they negotiate.

Since the pandemic hit Europe early this year, the EU has seen an unprecedented recession with the economy of the 27-nation EU contracting by 8.3% this year, according to the latest predictions. Around 135,000 of its citizens have died from the disease.

To make sure the hardest hit nations can bounce back and the bloc as a whole can recover, the leaders are considering a 750-billion-euro recovery fund and at the same deciding on a 1.1-trillion-euro, seven-year budget. With 27 leaders coming in with diverse demands the two-day summit might not even be enough to settle their differences.

That magnitude was what made the moment of lightness at the start of the summit Friday morning so special.

Summit host and European Council President Charles Michel was first in the room, and was soon bumping elbows with Borissov and others as they arrived. European Parliament President David Sassoli first went for a zen-like bow but soon got his elbow out like his chums did.

European Commission President Ursula von der Leyen crossed her arms across her chest. Merkel clasped her hands together as a greeting. Soon they were elbow bumping each other too — and others.

For Merkel it was even a more special since she turned 66 and got presents from French President Emmanuel Macron, Borissov and Portuguese Prime Minister Antonio Costa, who also celebrated his birthday.

Soon Michel called them all to their desk, which had been especially spaced out as a health precaution.

Then, literally, the masks came off. Metaphorically, the gloves did too.

Mike Corder contributed to this report from The Hague, Netherlands.