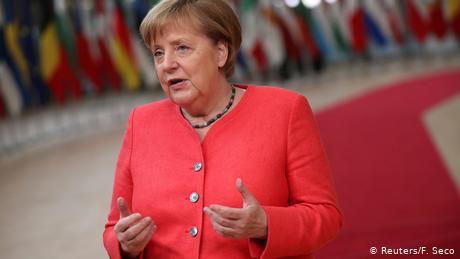 German Chancellor Angela Merkel said on Friday she expected a tough round of negotiations on a multibillion-euro coronavirus recovery plan, at an EU summit in Brussels.

"We are going into the consultations with a lot of vigor, but I must also say that the differences are still very, very large and I cannot, therefore, predict whether we will be able to reach an agreement this time," she said.

"It would be desirable, but we also have to face reality and we really need a great deal of willingness to compromise if we are to achieve something that is good for people and good for Europe in the face of the pandemic. That is why I expect very, very difficult negotiations."

The summit is facing a number of hurdles, including drastically varying hopes for the outcome and budget allocation.

According to Italian Undersecretary of State for Foreign Affairs Manlio di Stefano, Italy is hoping for a "conditionless" bailout as a result of the talks over the €1-trillion EU budget and €750-billion coronavirus recovery fund.

"We have to grant money to the countries that need it, and be clear that they [financial assistance] are not linked at all to the conditions that are already existing in the European Stability Mechanism," di Stefano told DW.

"We are not saying we want money to do whatever we want, we are saying that we want to use that money to recover from the economic damage caused by the coronavirus," he added. "We are not just debating about the Italian future, we are debating the European Union's future."

"I'm not optimistic, but you never know," Rutte told Dutch broadcaster NOS as he arrived in Brussels to negotiate the 27-member bloc's 2021-27 budget.

"I'm not so optimistic ... We think the initial [budget] proposal is interesting, promising," Nauseda told reporters upon arrival.

'Europe is at stake'

Despite the pessimism of some of his counterparts, Spanish Prime Minister Pedro Sanchez said that EU leaders have an obligation to their citizens to reach an agreement on the recovery fund.

"Spain is coming to this summit eager to reach an agreement, to defend logically our national interests on agriculture and also on how we conceive the governance of the recovery fund," Sanchez said.

French President Emmanuel Macron led the early negotiations, arriving Thursday and meeting with Rutte in the pre-summit hours. "The coming hours will be absolutely decisive," said Macron. "It is our European project that is at stake.''

European Council President and summit host Charles Michel said on Thursday that the crisis brought about by the pandemic, "with all of its economic and social consequences, is the most severe we have had to face since the Second World War.''