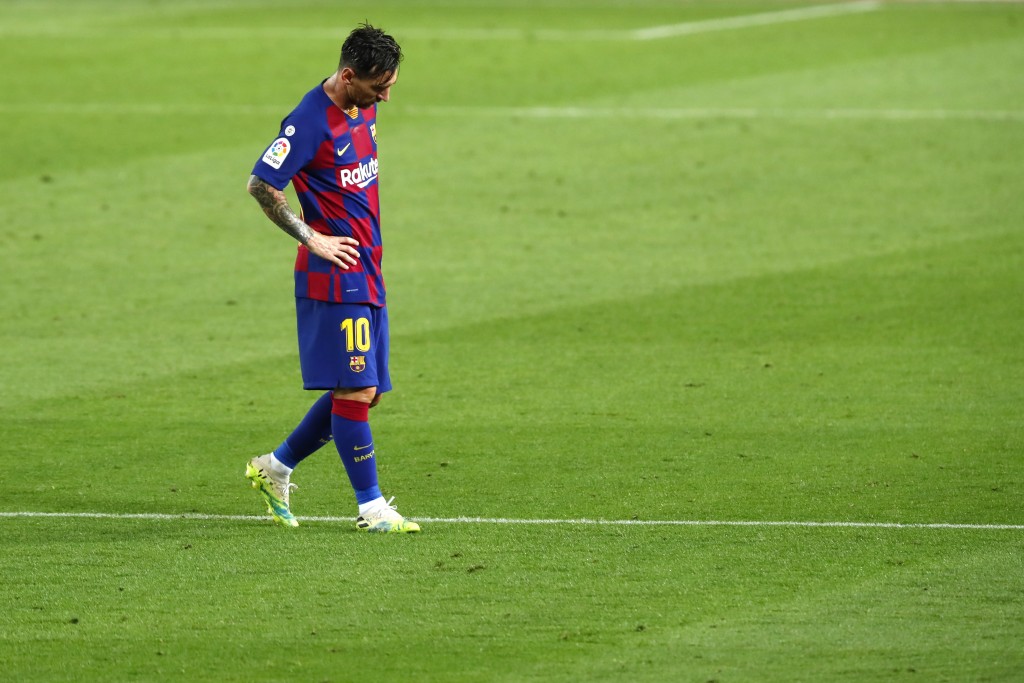 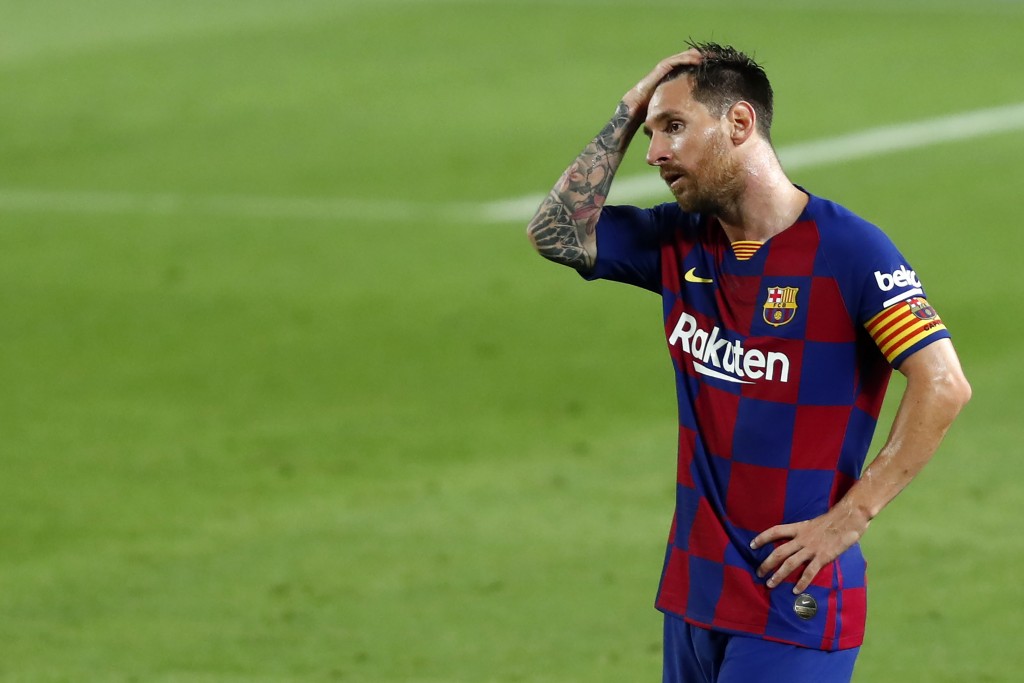 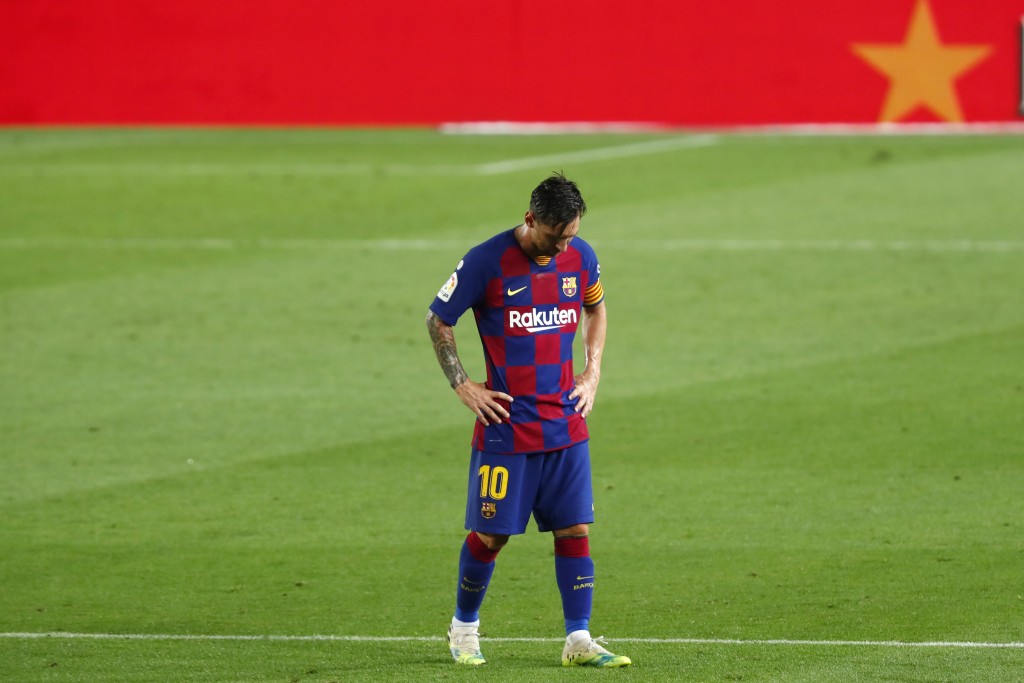 BARCELONA, Spain (AP) — Barcelona now needs a perfect run in the Champions League to avoid ending a season without a major title for the first time in six years.

Real Madrid dethroned Barcelona as Spanish league champion on Thursday when it clinched its record 34th Liga trophy. Madrid secured the title with one round to go after it beat Villarreal 2-1 and Barcelona lost 2-1 to 10-man Osasuna.

The loss of the title marks the low point in a difficult season for Barcelona. Rocked by disputes inside its board and between its squad and sports director, the Catalan club was unable to surround Lionel Messi with a winning combination.

Messi wasted little time in voicing his frustration after the humiliating loss to Osasuna, his team’s first loss at Camp Nou since November 2018.

“I said it some time ago, that playing like this we had no chance of winning the Champions League, and it turns out we didn’t even have enough to win la Liga,” Messi said.

Barcelona must regroup for its Champions League game against Napoli on Aug. 9 — the round-of-16 contest delicately poised after a 1-1 draw in the first leg in Italy — to advance to the “bubble” knockout tournament in Lisbon.

“Playing like this we will lose against Napoli,” Messi said. “We have to start from zero in the Champions League and blame ourselves for what went wrong” in the domestic league.

Here are some reasons for Barcelona’s defeat:

Messi, now 33, is still the best player in the league. He led both in scoring, with 23 goals, and in assists, with 20 passes for goal.

Barcelona scored a league-leading 81 goals— with Luis Suárez, Antoine Griezmann, Ansu Fati, and Arturo Vidal combined for 36 goals— but there was clearly a problem of team chemistry.

Griezmann did not meet expectations after transferring from Atlético Madrid, often seeming more concerned with playing for Messi than offering a scoring option for his team.

Besides having world-class forwards, Barcelona’s golden years were built on its midfield. It is still anchored by 32-year-old Sergio Busquets, but Ivan Rakitic lost his starting job to newcomer Frenkie de Jong, who despite flashes of talent showed he still needs to grow into the role. The club lost patience waiting for Arthur to blossom into its playmaker and he is bound for Juventus next season.

Barcelona president Josep Bartomeu initially said he wanted to stand by Ernesto Valverde until the end of the season, saying he was the best coach to lead the team into the future.

But he lost faith in Valverde, who had won back-back-league titles and had Barcelona in the league lead, after Barcelona lost 3-2 to Atlético Madrid in the Spanish Super Cup semifinals. The loss seemed to confirm a tendency that Barcelona has developed of collapsing in big matches, such as its 4-0 debacle at Liverpool in last year’s Champions League.

So, out when Valverde and in came Quique Setién, a coach who had long declared his love for Barcelona’s style.

Setién made changes to the starting lineup. He stopped Valverde’s alternating between Sergi Roberto and Nelson Semedo in defense and shifted Roberto into his natural role in midfield, leaving Semedo to flourish as the full-time starting right back. Setién also gave another chance to 20-year-old midfielder Riqui Puig, the latest product of Barcelona’s youth academy.

But overall, the performances were too dull for a club packed with stars.

When asked Thursday if he thought he would keep his job long enough to at least finish the Champions League campaign, Setién replied: “I hope so, but I don't know.”

Barcelona led the league by two points over Madrid when the competition was suspended in March while Spain locked down for the coronavirus pandemic. At the time, Setién said he hoped the extra time off would give his players more of a chance to assimilate to his tactics.

Instead, Barcelona appeared flat and seemed to wear down faster than many of its rivals because of the accelerated game schedule of matches every three days to squeeze in the final 11 rounds after the league resumed.

Barcelona lost the league lead after a 0-0 draw at Sevilla on June 19. Even though Barcelona was still level on points with Madrid, Gerard Pique accurately forecast that Madrid would not drop any points.

“Madrid did its part by winning all its matches, which is impressive, but we also helped them to win this league,” Messi said. “The worst part is that the way we finished the league doesn’t bode well for what lies ahead.”