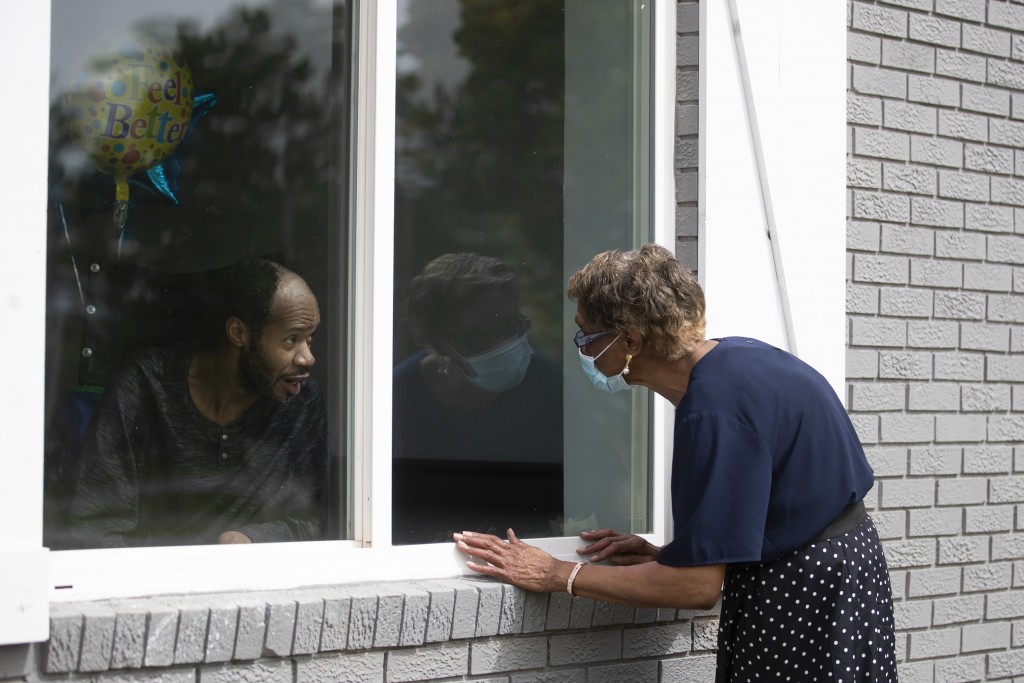 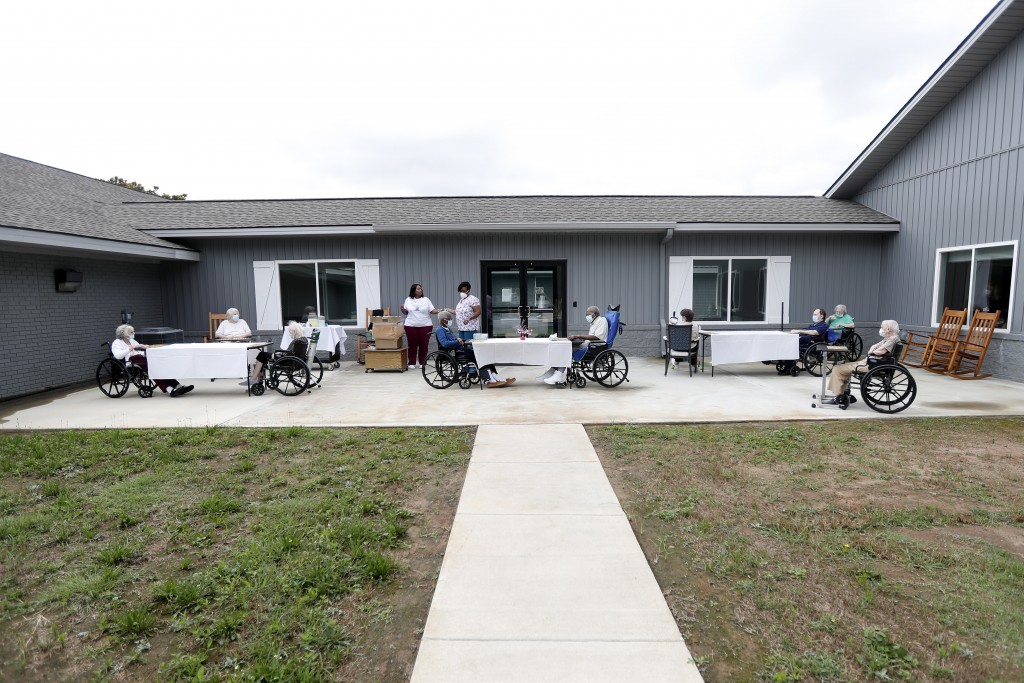 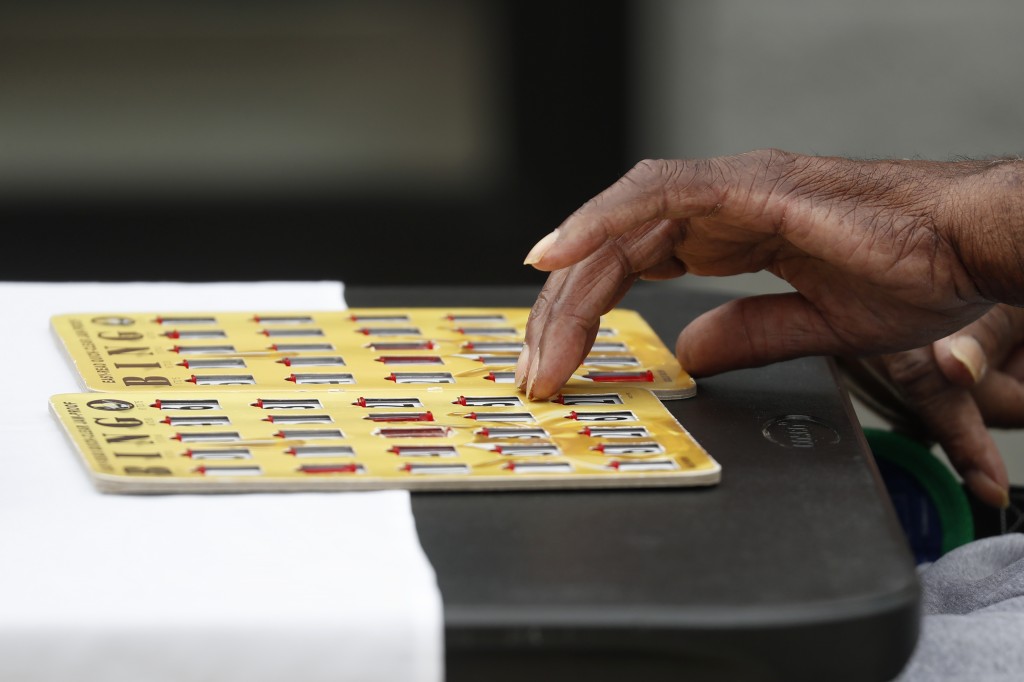 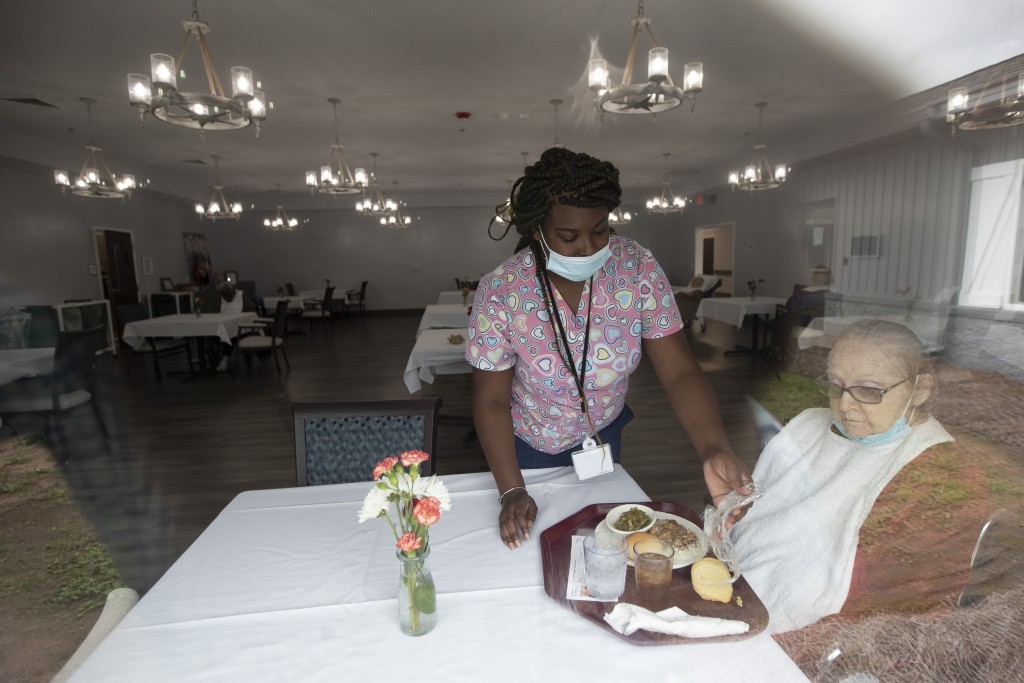 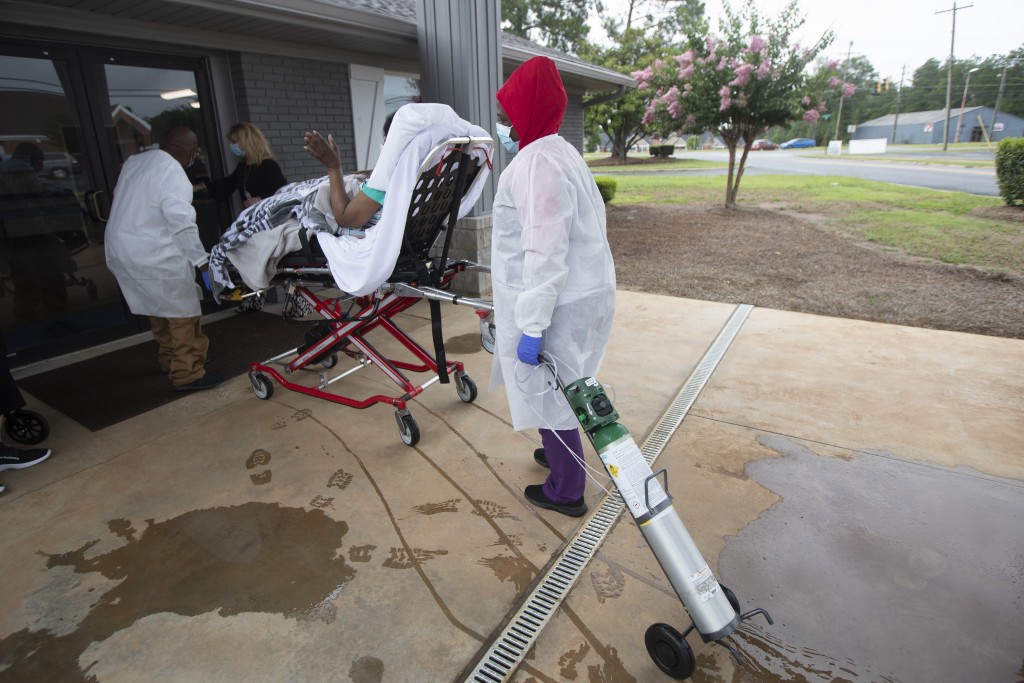 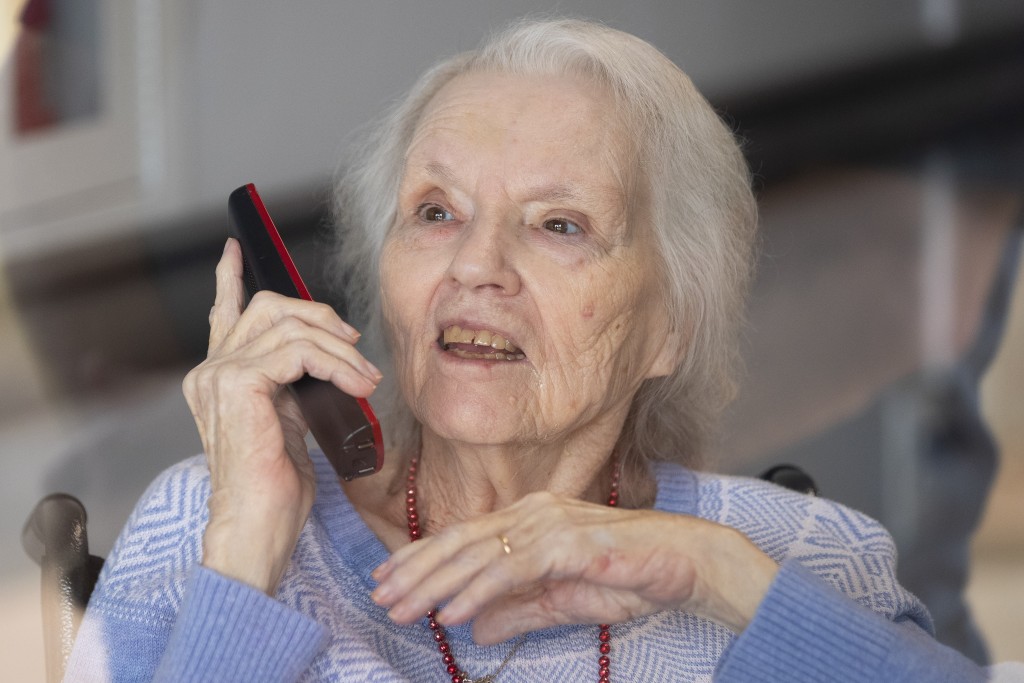 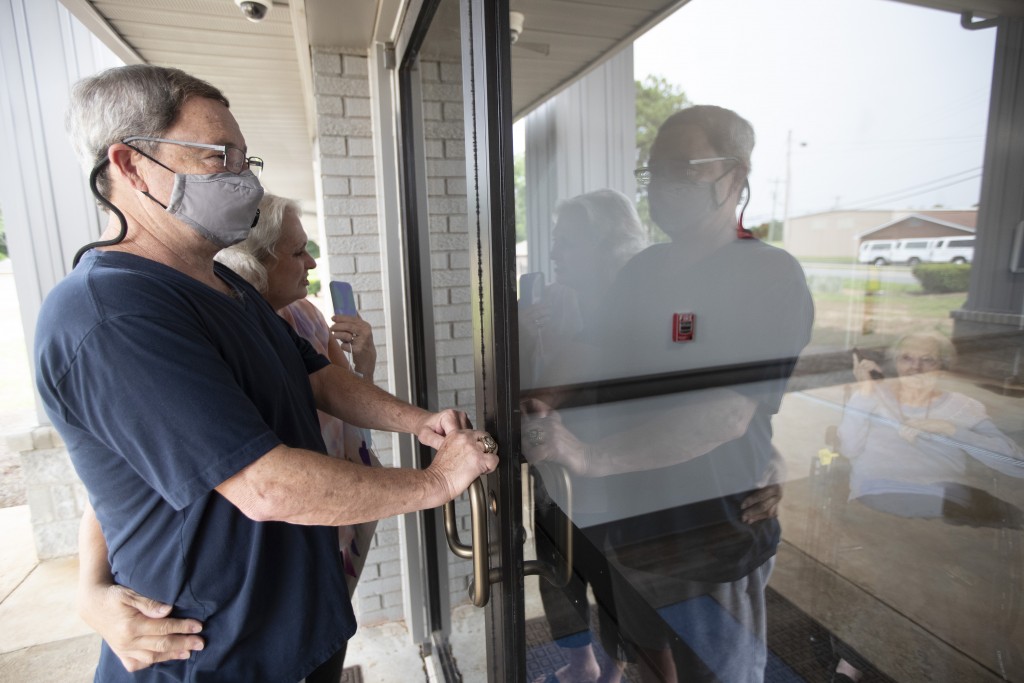 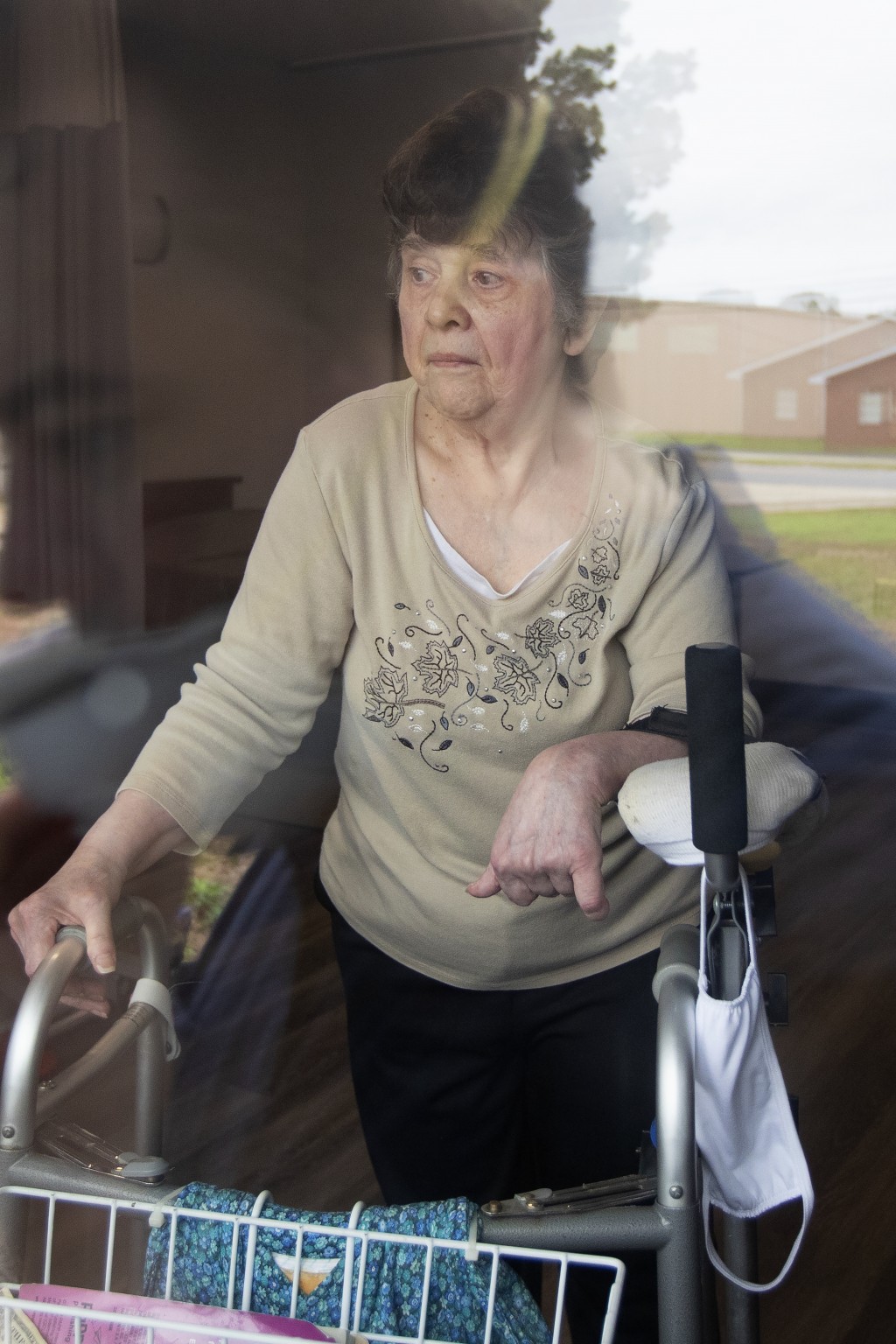 WARNER ROBINS, Ga. (AP) — In nursing homes across the U.S., life is as frozen as when the lockdown began four months ago.

Today, as some states tiptoe toward allowing nursing home visits again, most remain walled off.

The result is places like Southern Pines in central Georgia, which the virus engulfed in the spring, but residents now find themselves neither in the heat of panicked battle nor past it.

“We’re going to have to run different for a long while,” says Donna Stefano, the administrator at Southern Pines. “Otherwise it’s going to come back and next time we may not be so lucky.”

Bingo games have shifted from big gatherings in the activity room to socially-distanced ones in residents’ doorways. Most other group activities have been nixed, with staff trying to brighten days with roaming ice cream socials, snack carts and other treats that may elicit a smile while keeping people safely apart. Meals are largely eaten alone, away from the dining room.

And, more than anything, those that call Southern Pines home are still grappling with seeing loved ones only through window panes or a screen, depriving them of loving touches.

“Some days you feel like you could scream,” says 80-year-old Kay Gee, who misses visits from her four children and three grandchildren, not to mention two dogs left in her family’s care.

Nursing homes nationwide followed the federal government’s March 13 guidance to halt all visits, a move that spurred some backlash at Southern Pines but seemed prescient as deadly outbreaks exploded elsewhere and the home went six weeks with no infections at all.

When the lucky streak ended, the on-edge early days of the pandemic gave way to a weeks-long fight to contain it, with more than a quarter of residents infected. Most showed few if any symptoms and, in the end, all of them survived.

A 72-year-old retired glass salesman named Butch McAllister is one of them. When his test came back positive, he was forced into isolation, but took it all in stride. He’d heard all the horror stories about COVID-19, but says he turned it over to God and didn’t fret.

He’s past the virus now, but the effects continue. McAllister’s wife is at a different nursing home and they haven’t seen each other in months. His daughter and a grandson visit at the window, a nice sight, but he wishes he could touch them too.

He admits feeling lonely at times and can’t wait for in-person visits, just as he salivates thinking about going out for a meal at a Greek restaurant or a favorite steakhouse. That’s not now, though.

“Nobody can come in and nobody can go out,” he says. “I’m ready for it to happen.”

At least 55,000 residents and staff of U.S. long-term care facilities have died of COVID-19, a disproportionately high figure. It represents about 40% of the total U.S. virus deaths.

The staff here knows they’re not past this pandemic and worry the virus could return. Temperatures are still taken three times a day and employee health is monitored.

In a few states, a trickle of visitors have been allowed back into homes, but most have cautiously eased back with rules like Indiana’s, where relatives must have a negative virus test in order to sit, masked and distanced from their loved one, outside of the facility.

At Southern Pines, a state emergency order barring nursing home visits has been extended another month to Aug. 12. With Georgia recording a spike in virus cases, residents and staff alike know another delay is possible and that the isolation here will continue.

“It’s really not normal,” says Christen Washington, a nurse who handles social services and admissions at Southern Pines. “I don’t know what that is anymore.”

Angie Shepard, the home’s 53-year-old nursing director, says her staff has done its best to hold residents’ hands, rub their backs and comfort those who are hurting in the lockdown.

“I’m here for a reason and it’s to take care of these people,” she says. “That’s all I ever wanted to do.”

Isolation and loneliness are not new feelings in nursing homes, but the pandemic has unleashed them in new ways. Many of the simple joys their residents came to count on have disappeared.

Judy Morey, a 71-year-old who serves as president of Southern Pines’ resident council, enjoyed playing cards and huddling close with friends to put together a puzzle before the pandemic. Her brother would pop in a few times a week.

All of that is gone now and Morey wonders if things will even change by the time her birthday arrives next month. For now, she says she’s coping as best she can even as the days feel far longer than any that came before.

“All I kind of want to do is taking naps all day long out of boredom,” she says.

Matt Sedensky can be reached at msedensky@ap.org or, on Twitter, at @sedensky