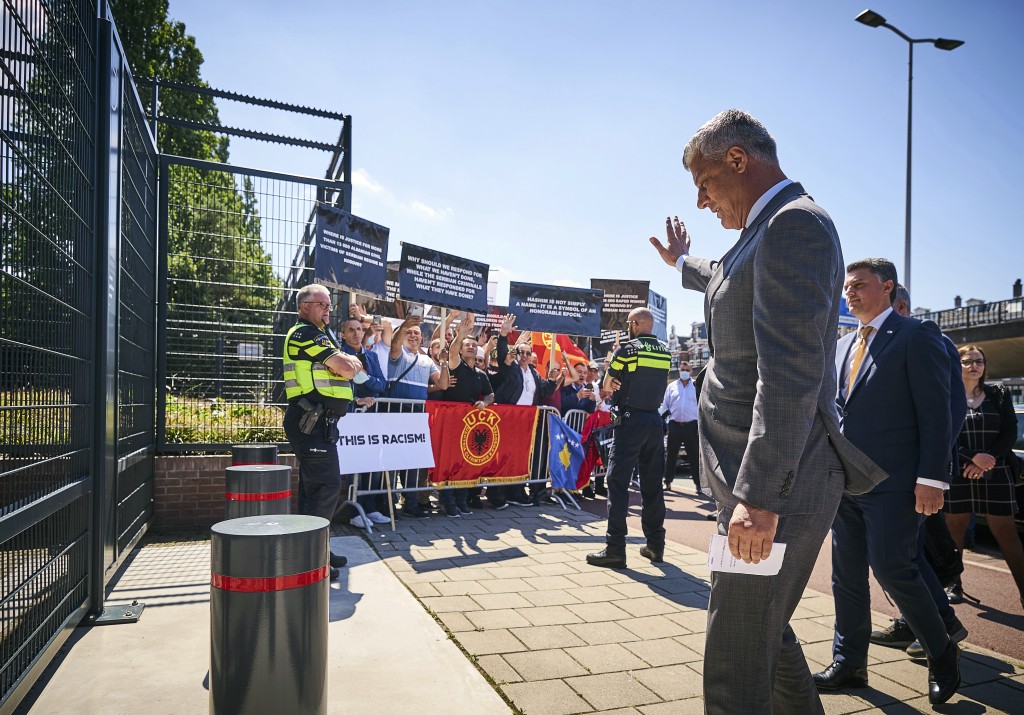 PRISTINA, Kosovo (AP) — The president of Kosovo said Thursday he told prosecutors at a special international court in the Netherlands that he committed no crimes during the 1998-1999 war after which his country won independence from Serbia.

President Hashim Thaci was questioned for four days by prosecutors at the Kosovo Specialist Chambers and Specialist Prosecutor’s Office who have charged him with criminal responsibility for crimes, including nearly 100 murders, during and after Kosovo’s battle for independence.

Thaci said he provided “information about my role, my responsibilities, during the war and period covered by the mandate of the Specialist Court.”

“In case they (prosecutors and the judge) do so in a professional, impartial and honest manner, they can easily conclude that I did not commit any kind of crime or alleged violation,” he told journalists outside the court’s headquarters in The Hague while a small group of supporters chanted his name.

The court, which has international staff working under Kosovo’s law, is mandated to look into allegations that members of the Kosovo Liberation Army, which was fighting for independence, committed war crimes and crimes against humanity.

The indictment charges Thaci, former parliamentary speaker Kadri Veseli and others with crimes against humanity and war crimes, including murder, enforced disappearances, persecution and torture. A pretrial judge hasn’t made a decision on whether to proceed with the case.

Thaci was a commander of the so-called Kosovo Liberation army, which fought for independence from Serbia. The war killed more than 10,000 people — most of them ethnic Albanians — and 1,641 are still unaccounted for. It ended after a 78-day NATO air campaign against Serbian troops.

Kosovo, which is dominated by ethnic Albanians, declared independence from Serbia in 2008, which Belgrade doesn’t recognize.

Thaci repeated that the war was “just, because it was a fight for freedom.”

The questioning of Thaci ended on the same day that Kosovo Prime Minister Avdullah Hoti met with Serbian President Aleksandar Vucic in Brussels to resume European Union-facilitated face-to-face talks that had been frozen since November 2018. Officials said they discussed the issue of the war's missing and displaced people as well as economic cooperation.

A White House meeting last month between the two sides failed after the prosecutors in The Hague issued the war crimes indictment for Thaci.

Washington expects Belgrade and Pristina to start applying air, railway and road agreements that it persuaded them to sign earlier this year.