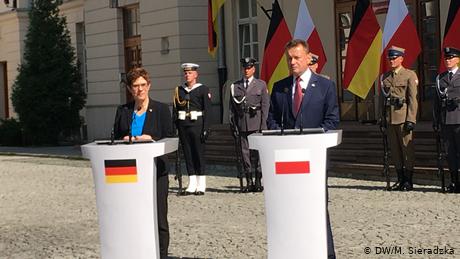 There were signs of unity when Germany's defense minister, Annegret Kramp-Karrenbauer, met her Polish counterpart Mariusz Błaszczak in Warsaw on Wednesday. Kramp-Karrenbauer was keen to stress that NATO and trans-Atlantic relations were the cornerstone of Europe's security architecture and must remain so, but that the European pillar within NATO must be strengthened.

Both ministers agreed that there must not be any competition between the EU and NATO. "I am pleased that we agree on the fundamental issue, which is that the EU should not rival NATO, but that their capacities and competencies should complement each other," Błaszczak said. He too described this coordination as a guarantee of European security.

In strengthening the European pillar of NATO, one thing Kramp-Karrenbauer considers particularly important is "the ability to redeploy troops across Europe, for example across Germany to Poland."

Consequently, she said, Poland and Germany stand "side by side" with regard to increasing funds for "military mobility" in the EU budget, which is currently under discussion. In the current compromise proposal, put forward by EU Council President Charles Michel, €7 billion ($8 billion) are earmarked for the EU's defense funding. Another 1.5 billion will be used to adapt the European transport network to fit military requirements.

Her discussions at the Polish Defense Ministry were also focused on the EU's "strategic compass." The new security policy document, to be presented in 2022, will reassess the threats to Europe.

Kramp-Karrenbauer wants "broad political agreement" behind it and plans to establish a common basis for the compass during the German EU Council Presidency. "In this regard, it is especially important that we contribute our shared view to the analysis of threats, particularly concerning Russia's attitude and actions," Kramp-Karrenbauer said in Warsaw.

Relations with Russia are a sensitive and emotional issue in Poland. This was apparent in Kramp-Karrenbauer's meeting with a group of Polish security experts. The meeting's focus was, among other things, the construction of the Baltic Sea pipeline, which has been sharply criticized in Poland.

"I can say it openly, because it's no secret: Nordstream 2 is certainly not my favorite project. If I had been involved and in charge from the beginning, I probably would not have pursued and committed to it," Kramp-Karrenbauer said.

She spoke of Poland and Ukraine's "serious" concerns that the pipeline could increase Europe's dependence on Russian gas. However, the German defense minister said this would not apply to Germany, because it has made "a massive effort" in recent years to diversify its energy supply, including the use of renewable energies and liquefied petroleum gas.

Dependence on Russian gas has decreased, and this trend will continue, she asserted.

Kramp-Karrenbauer would like to see more joint German-Polish projects. She suggested that Poland could, for example, consider joining the Franco-German combat tank project. Germany and France plan to collaborate in the manufacture of combat tanks. These are expected to be deployed by the Bundeswehr and other armed forces in Europe from 2038 onward, as replacements for the aging Leopard 2.

Although Poland's tank army consists mainly of older German vehicles, the country now looks to the US when it comes to security. This has repercussions for military cooperation.

In 2018, Poland sealed the biggest arms deal in its history when it purchased two Patriot surface-to-air missile systems. The purchase of 32 F-35 multi-role combat aircraft is also currently in the pipeline.

There are more than 4,500 American soldiers stationed in Poland, but for years now Warsaw has been keen to further strengthen the US presence there, saying that this is necessary because of the threat posed by Russia.

During these discussions about the threat analysis and Europe's "strategic compass," Kramp-Karrenbauer is going to encounter some big differences between the countries of central and south-eastern Europe in their attitudes toward Russia, NATO and the United States.

Bulgaria is on her itinerary right after Poland. For the past week, there have been huge demonstrations there against the centre-right-nationalist government, supported by the opposition Socialists and the country's pro-Russia president, Rumen Radev.

The EU has expressed its concern on many occasions about Russian claims to power in the Black Sea region. After Bulgaria, Kramp-Karrenbauer will also visit Hungary, the Czech Republic and Slovakia.

Wojciech Przybylski, head of the Warsaw think-tank Visegrad Insight, told DW that the countries of the region are very far from speaking with one voice when it comes to security policy. "In Poland and the Czech Republic, the Russian dangers are clearly defined," he explains.

"The Russian threat is also an important consideration in the Slovakian capital Bratislava, where they are currently preparing a new security strategy."

"But large sections of society have a completely different attitude towards Russia," he stresses, pointing out that historical and cultural ties to Russia are strong, especially in eastern Slovakia.

This is also true of parts of Hungarian society, and the Hungarian prime minister, Viktor Orban, uses this in his policies. "In the conflict over Ukraine, Orban is adopting positions that are closer to Russia than the West," says Przybylski.

Przybylski points out that there are also big differences across the countries of the region in their attitude toward the US. While US troops are welcome in Poland, in the Czech Republic or Slovakia, for example, NATO soldiers are regarded as "foreign troops."