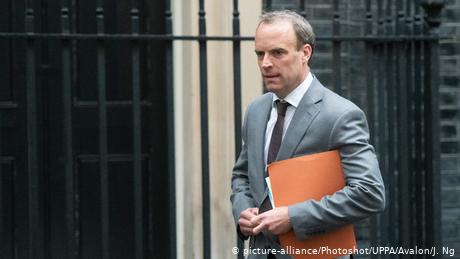 The British government said Thursday that Russia attempted to interfere in its 2019 general election by obtaining sensitive documents on a planned free trade agreement with the US and leaking them online.

"It is almost certain that Russian actors sought to interfere in the 2019 General Election through the online amplification of illicitly acquired and leaked government documents," said Raab.

"Sensitive government documents relating to the UK-US Free Trade Agreement were illicitly acquired before the 2019 General Election and disseminated online via the social media platform Reddit," he added.

The Intelligence and Security Committee said it would release a long-awaited report on the alleged interference before parliament's summer break next week. The committee said it was unable to publish the report since it was compiled last year after Prime Minister Boris Johnson refused to clear it ahead of December's general election.

The report needs government approval before it can be released to the public.

"We can only say this: Russia has nothing to do with these attempts. We do not accept such accusations nor the latest groundless allegations of interference in 2019 elections," Kremlin spokesman Dmitry Peskov told the TASS news agency.

Russia has been accused of interfering in other countries' elections, including previous UK polls. There has been speculation that the unpublished report might reveal details about potential links between Russia and the Leave campaign going into the 2016 referendum vote on the UK leaving the European Union. The UK voted to leave the union by a narrow margin and officially left the EU in January.

In the United States, Special Council Robert Mueller launched a multi-year investigation into allegations that Russia interfered with the 2016 US Presidential election. Trump and Russia denied any wrongdoing. Hackers released more than 19,000 emails among top Democratic party officials on the eve of the 2016 Democratic National Convention via WikiLeaks. US President Donald Trump later went on to win the election.