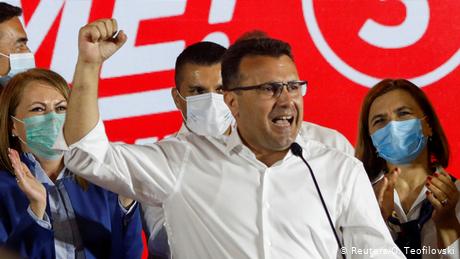 In the run-up to the early parliamentary elections in North Macedonia, two major issues were considered crucial in terms of the Balkan country's future: whether the new government would continue on the pro-Western path laid down by former Prime Minister Zoran Zaev's Social Democrats (SDSM) and, equally importantly, whether the new executive would prove both stable and spirited enough to pursue the reforms necessary.

Hours after the polls closed, North Macedonia's State election commission was still unable to present official data for Wednesday's (7/16/2020) early elections. Commission president Oliver Derkovski said that the website was hacked, but that the ballot count had been unaffected.

The Social Democrats declared victory on Thursday after receiving 36 percent of the vote, with 94 percent of the ballots counted. Their conservative rivals VMRO-DPMNE (Internal Macedonian Revolutionary Organization – Democratic Party for Macedonian National Unity) were less than two percentage points behind and insisted that they too could form a government.

As things stand, both parties are well short of the 61 seats needed in the 120-member parliament, with the Social Democrats projected to win 46 and the conservatives 44 seats. That puts the largest party of the Albanian community in North Macedonia – the Democratic Union for Integration (DUI) – with its 15 projected seats in the role of a kingmaker.

A period marked by repression and corruption

Not so long ago, after the elections in 2016, DUI decided to ditch their coalition with the conservatives in favor of the Social Democrats. This ended nearly ten years of VMRO-DPMNE rule, a period marked by repression and corruption under former strongman Nikola Gruevski, now in self-imposed exile.

A similar scenario this time would put the country on a pro-Western path. After concluding the historic name deal with Greece – adding "North" to Macedonia – there is no doubt that SDSM and DUI will continue their policy of reconciliation with the country's Balkan neighbors, while hoping for a quick accession to the EU.

Little or no room for maneuver

VMRO-DPMNE has openly opposed the name-change policy, leaving the party little or no room for maneuver in future coalition talks with either DUI or the second strongest Albanian ethnic party in the parliament. From that point of view, forming a new government should be straightforward. But it isn't.

The last twelve months of coalition government were beset with constant bickering and Zaev's Social Democrats spent the campaign criticizing DUI for alleged corruption and cronyism. Zaev himself promised his voters that he would send the Albanian party – which has featured as a junior coalition partner in various governments almost uninterrupted since 2002 – into opposition. DUI fought back demanding that its "top candidate" be named prime minister in exchange for any future alliance.

It is highly probable that – with the customary tutelage from the EU and US diplomats – a compromise will be found in the end, but the long-term stability and health of such a coalition would be more than questionable. Not least because of the razor-thin majority in the new parliament.

North Macedonia, one of the poorest European countries with an underdeveloped health system, has been hit hard by the coronavirus pandemic and many analysts predict a downward economic trend that could further destabilize the country. The expected onset of EU accession talks could add a further element of pressure, distracting from the key reform priorities in the areas of the judiciary, combatting corruption and organized crime, intelligence services reform and public administration.

Return to the ballot box?

Add to that the regional uncertainties – the expected solution of the Serbia-Kosovo dispute and the ongoing mass anti-government protests in neighboring Serbia and Bulgaria – and a weak government in Skopje might not be the best recipe for success in the volatile Balkan region.

In a country where early elections are the norm rather than the exception, it is unlikely to be long before the political leaders decide it is time to return to the ballot box.