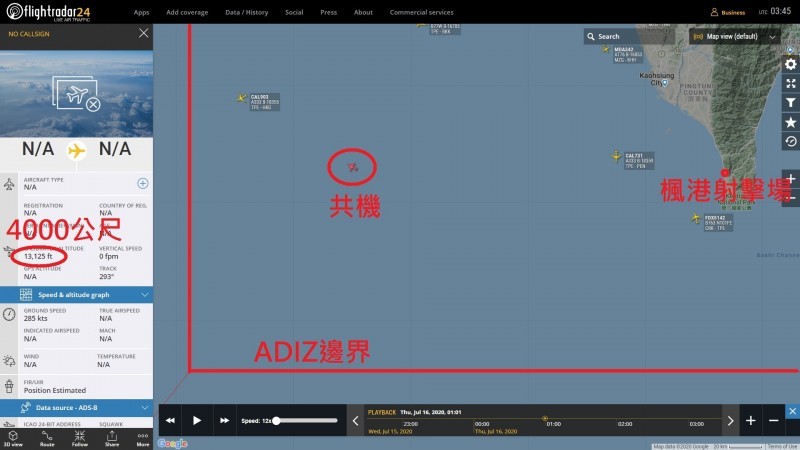 During Thursday's Tien Lei Drill (天雷操演), which is part of the ongoing Han Kuang exercises (漢光演習), the Taiwanese military at the Fenggang shooting range in Pingtung County fired heavy artillery into the waters off the southwest coast of Taiwan. In the midst of the drills, the Chinese military aircraft suddenly entered Taiwan's ADIZ, at one point coming within 333 kilometers of the shooting range, reported Liberty Times.

The latest incursion marks the 20th time this year that Chinese warplanes have penetrated Taiwan's ADIZ. The Taiwanese military emphasized that it was closely monitoring all movements by China's armed forces.

During the drill, F-16 fighter jets and attack helicopters also demonstrated their prowess. In addition, joint arms battalions staged anti-landing operations at Jialutang Camp in Fangshan Township with a crowd of military buffs in attendance.

The exercise started at 8:35 a.m. and a Chinese People's Liberation Army Air Force (PLAAF) warplane approached Taiwan's southwest ADIZ at 8:40 a.m. It then circled the area from an altitude of between 4,000 meters and 8,500 meters.

When the Chinese jet was at 4,000 meters, Taiwan's military then sent an emergency broadcast informing the aircraft that it had entered the southwest corner of Taiwan's ADIZ. The broadcast then notified the jet that it was affecting Taiwan's flight safety and demanded it immediately turn away, which it eventually did.

A Taiwanese military buff who monitored the plane's movements said that the PLAAF aircraft had been cruising to the west of Taiwan and repeatedly entered Taiwan's ADIZ. Meanwhile, the U.S. military has also made a statement during the Han Kuang drills by dispatching U.S. Navy MQ-4C Triton reconnaissance UAVs to patrol the waters off the southeast coast of Taiwan on Wednesday (July 15).