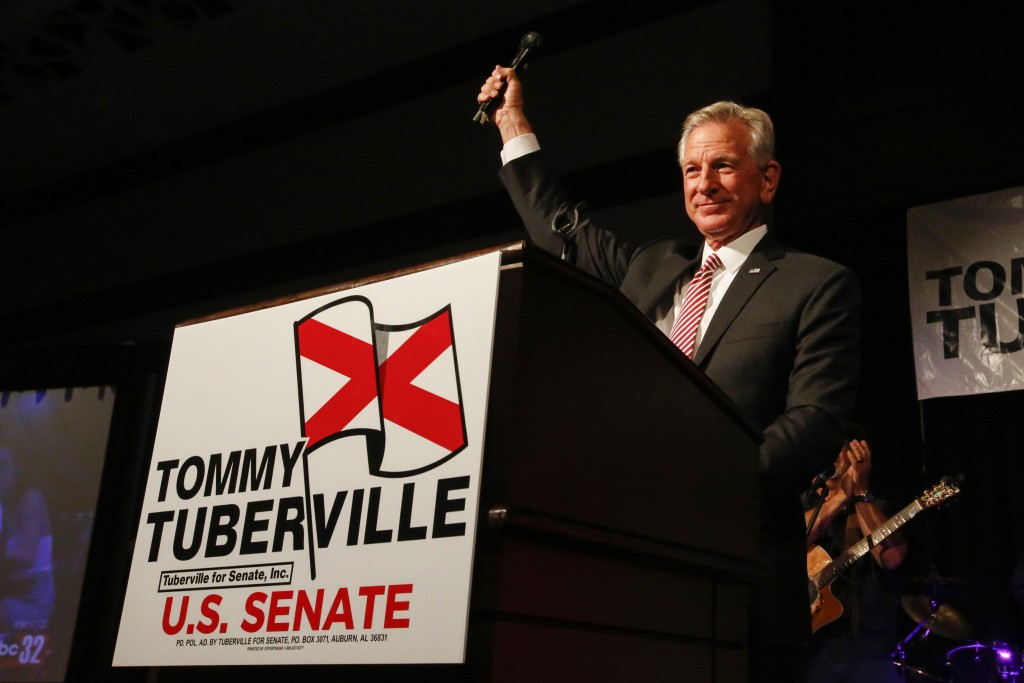 MONTGOMERY, Ala. (AP) — With control of the U.S. Senate on the line, Alabama’s race is shaping up to be a contentious showdown between college football coach backed by President Donald Trump and the body’s most endangered Democrat, who will need to motivate his base and court moderate voters to win political survival.

Armed with Trump’s endorsement and fame from years on the sidelines, former Auburn University football coach Tommy Tuberville handily defeated former U.S. Attorney General Jeff Sessions in the GOP runoff Tuesday to capture the Republican nomination. He will challenge Sen. Doug Jones, who pulled off a stunning political upset in a 2017 special election to become the first Democrat elected to the Senate from Alabama in a quarter century.

Tuberville has never held public office but cast himself as a better match with Alabama voters in his victory speech.

“Democrat Doug Jones is running for reelection with the slogan One Alabama. Well, you can make no mistake about it. What Doug really means is one liberal Alabama,” Tuberville said on election night. Tuberville

After pulling off one improbable victory, Jones is not ceding his chances of another in a race setting up to be both pricey and combative.

“My message is going to be very simple: We’ve got to have leadership. We are in a time of crisis. I want you to look at the record,” Jones said, adding that he wants to talk about jobs, education and health care.

David Mowery, an Alabama-based political consultant, said the “deck is stacked” against Jones but it would be a mistake for Republicans to think the race will be easy.

Jones will face the headwind of a presidential election year in a state were Trump captured 62% of the vote in 2016. He also faces a nominee without the baggage of Jones′ 2017 opponent, Roy Moore, a religious right candidate who was polarizing before being accused of sexual misconduct.

“I think Tuberville is probably a two touchdown favorite,” Mowery said. “But (Jones) won the first time. So obviously there is a chance, right? To use a terrible football metaphor, you still have to play the game.”

To win the Senate seat, Jones relied on increasing Democratic turnout, including Black voters who make up 27% of the state, and persuading some swing voters and moderate Republicans to come to his side or sit out the election.

“I think the D.C. perspective that this race is a slam dunk for Republicans has always been wrong and getting more wrong by the day,” said Zac McCrary, a Democratic pollster who works for some pro-Jones groups.

McCrary said Democratic turnout also will be higher for the presidential race and he expects strong turnout among Black voters and young voters, two key groups for Jones. Although Trump is expected to win Alabama easily, his margin in November might be less than in 2016, McCrary said.

Republicans have made recapturing the once reliably red state a priority, seeing it as their best chance to pick up a seat in the battle for partisan control of the Senate.

“We want that seat back. ... It’s going to be a battle, but we are going to win the war," Alabama Republican Party chair Terry Lathan said.

On Tuesday night, Trump tweeted his joy with Tuberville's win, denying Sessions the chance to reclaim the Senate seat he left to join the president's administration. Trump harshly criticized his first attorney general for recusing himself from the investigation of Russian interference in the 2016 presidential campaign.

Trump said Wednesday that Tuberville would be a “great senator"and denounced Jones as “not doing the job.”

The 100-day race is shaping up to be expensive as well as contentious.

One Nation, a group aligned with Senate Majority Leader Mitch McConnell, has reserved $3.2 million in ad time in Alabama and Club for Growth, a conservative organization focused on economic issues, also has begun airing a $1.3 million ad buy against Jones.

Jones has amassed a $9 million in campaign war chest, according to the latest fundraising reports.

Democrats have stepped up attacks against Tuberville, including his handling of the case of an Auburn football player accused of statutory rape of a 15-year-old girl and his involvement in a hedge fund where his partner pleaded guilty to fraud.

“’Sen. Jones got justice for four little girls murdered during church by the Klan. Tommy Tuberville thought a one-game suspension was enough when one of his players raped a little girl. Which one cares more about your daughter’s future?" the Alabama Democratic Party tweeted Wednesday morning. As U.S. attorney, Jones prosecuted Klan members behind the 1965 church bombing in Birmingham.

Tuberville’s campaign has said law enforcement officials handled the case of the player, who returned from suspension after a deal to plead guilty to a misdemeanor, and his involvement in the hedge fund was a mistake that he has paid for.

McCrary said what Tuberville has going for him is that “Alabama has a Republican DNA to it in a presidential election year" but that the current health and economic crisis in America could leave voters open to an experienced moderate.

“I think this race is sneaky close," he said.