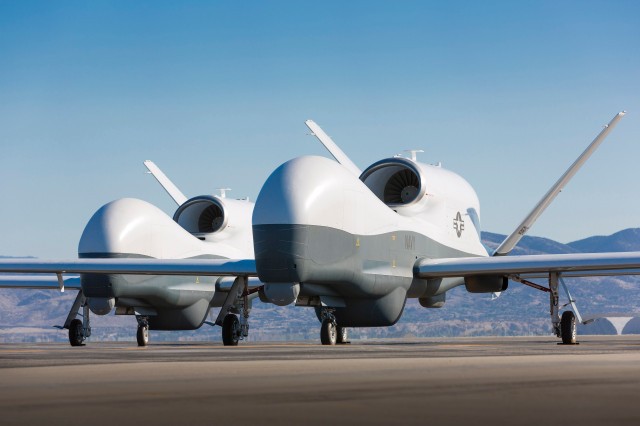 On Wednesday afternoon at 1:32 p.m., aircraft spotter Golf9 detected an unidentified aircraft with the hex code AE64C6 flying just off the west coast of the northern Philippines. Golf9 suggested that the aircraft was a U.S. Navy MQ-4C Triton, a high-altitude surveillance aircraft. First sighting of AE64C6 off of the Philippines. (Twitter, Golf9 screenshot)

At 2:14 p.m., Golf9 posted a screenshot from ADS-B Exchange appearing to show the aircraft over China's Fujian Province and heading due north. He then questioned the accuracy of the route by saying "The display of the ADS-B Exchange may be incorrect." At 2:32 p.m., the aircraft spotter Tokyo Radar also noticed AE64C6 flying over southern China and asked: "What is this?" At 2:44 p.m., Tokyo Radar followed up with another tweet showing the aircraft over eastern China and flying at an altitude of 49,996 feet and a speed of 985 kt, prompting him to write, "Is altitude 50,000 ft a high altitude reconnaissance plane or UAV?"

Later that evening at 9:27 p.m., the Peking University Institute of Ocean Research's SCS Probing Initiative reported spotting an aircraft with the hex number AE5C74, flying to the southeast of Taiwan. The Chinese aircraft tracker described it as a U.S. Navy MQ-4C Triton as well.

Rare to find an unmanned aerial vehicle in the #SouthChinaSea.
On July 15, US Navy MQ-4C Triton, a high-altitude long endurance UAV, was spotted patrolling to the southeast of Taiwan. pic.twitter.com/KjMgKnkuNl

On the ADS-B Exchange website, two routes are shown for AE64C6 on July 15, with one showing the plane starting from the Indonesian island of Borneo and heading north over the South China Sea and then over China, Russia, the arctic circle, then finally landing in the Canadian territory of Nunavut. The other route shows it taking off from the Indonesian island of Halmahera, flying to the east of the Philippines, the two Koreas, northeast China, Russia, and Canada, before landing in the state of Texas in the U.S. When asked to explain the odd flight path of AE64C6, Golf9 told Taiwan News that this could have been caused by a "bug in the application."