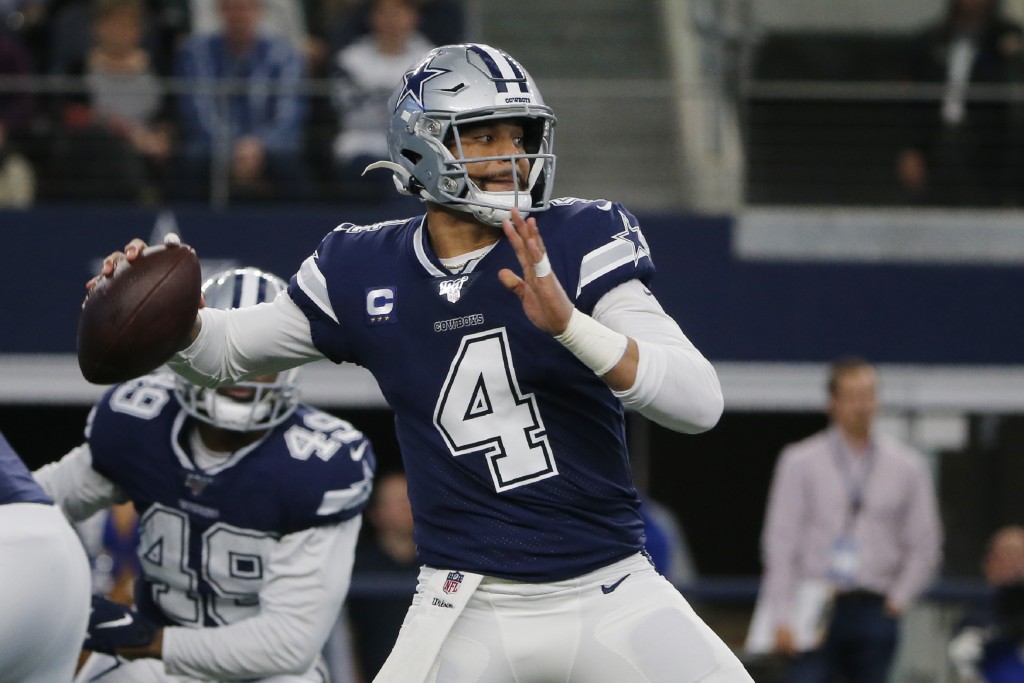 Dak Prescott will play whatever becomes of the 2020 season under the one-year franchise tag after the Dallas Cowboys and their star quarterback couldn't agree on a long-term contract.

Clubs had until Wednesday afternoon to reach multiyear deals with players given the franchise tag. Of the 14 tagged in March, two have agreements, including NFL rushing leader Derrick Henry with Tennessee just before the deadline.

Two more — Cincinnati receiver A.J. Green and defensive end Yannick Ngakoue of Jacksonville — haven't signed the one-year contract that goes with the tag. They can stay away from team activities without the risk of being fined. Ngakoue has said he won't play for the Jaguars and wants to be traded.

Prescott signed his $31.4 million contract in June. The 2016 NFL Offensive Rookie of the Year earned slightly more than $4 million total in the four years of his rookie contract after being drafted in the fourth round.

The Cowboys and Prescott have been working for more than a year on a long-term contract for a two-time Pro Bowler who has started every game of his career.

Prescott replaced an injured Tony Romo during the 2016 preseason and led a franchise-record 11-game winning streak that carried the Cowboys to the top seed in the NFC playoffs. Romo, a 10-year starter, never got his job back.

Dallas owner Jerry Jones has said repeatedly he considers Prescott a franchise quarterback for years to come. If so, his fate will be different than the other two QBs who have played under the franchise tag.

Drew Brees won a Super Bowl and became the NFL's all-time passing leader in New Orleans after playing under the tag with San Diego in 2005. Kirk Cousins went to Minnesota after tagged seasons with Washington in 2016-17.

For now, the third $100 million-plus contract in Dallas history — Romo had the first — will have to wait until at least 2021, when the Cowboys could put the franchise tag on Prescott again at nearly $38 million.

Henry and the Titans agreed on a multiyear deal a day after Kansas City secured Pro Bowl defensive end Chris Jones on a four-year contract that could be worth up to $85 million. Henry's deal is reported to be at $50 million over four years.

The Bengals used the $17.9 million tag on Green despite the seven-time Pro Bowler missing all of last season with an ankle injury. The move means Green is likely gone after this season, when he will be 32.

Leonard Williams of the New York Giants is set to play on the $16.1 million tag for a defensive tackle, although the union has filed a grievance intended to classify him as a defensive end earning $17.8 million.

Williams was acquired from the Jets in October for two draft picks. He has 17 1/2 sacks in five seasons, but finished with a career-low half sack last year.

Matthew Judon of Baltimore is set to earn $16.8 million as the midpoint between linebacker and defensive end, according to the NFL Network.

Pass rushers Shaq Barrett of Tampa Bay and Bud Dupree of Pittsburgh are classified as linebackers ($15.8 million), but the NFL Network has reported that both have filed grievances seeking the defensive end salary of $17.8 million.

LA Chargers tight end Hunter Henry is set to earn $10.6 million. He was one of Philip Rivers' most reliable targets last season, finishing with 55 catches for 652 yards while missing four games with a knee injury. With Rivers gone to Indianapolis in free agency, Tyrod Taylor is expected to start.

Anthony Harris of Minnesota and Denver's Justin Simmons are set to play under the $11.4 million tag for a safety. Guards Joe Thuney of New England and Brandon Scherff of Washington are set to earn $14.8 million.