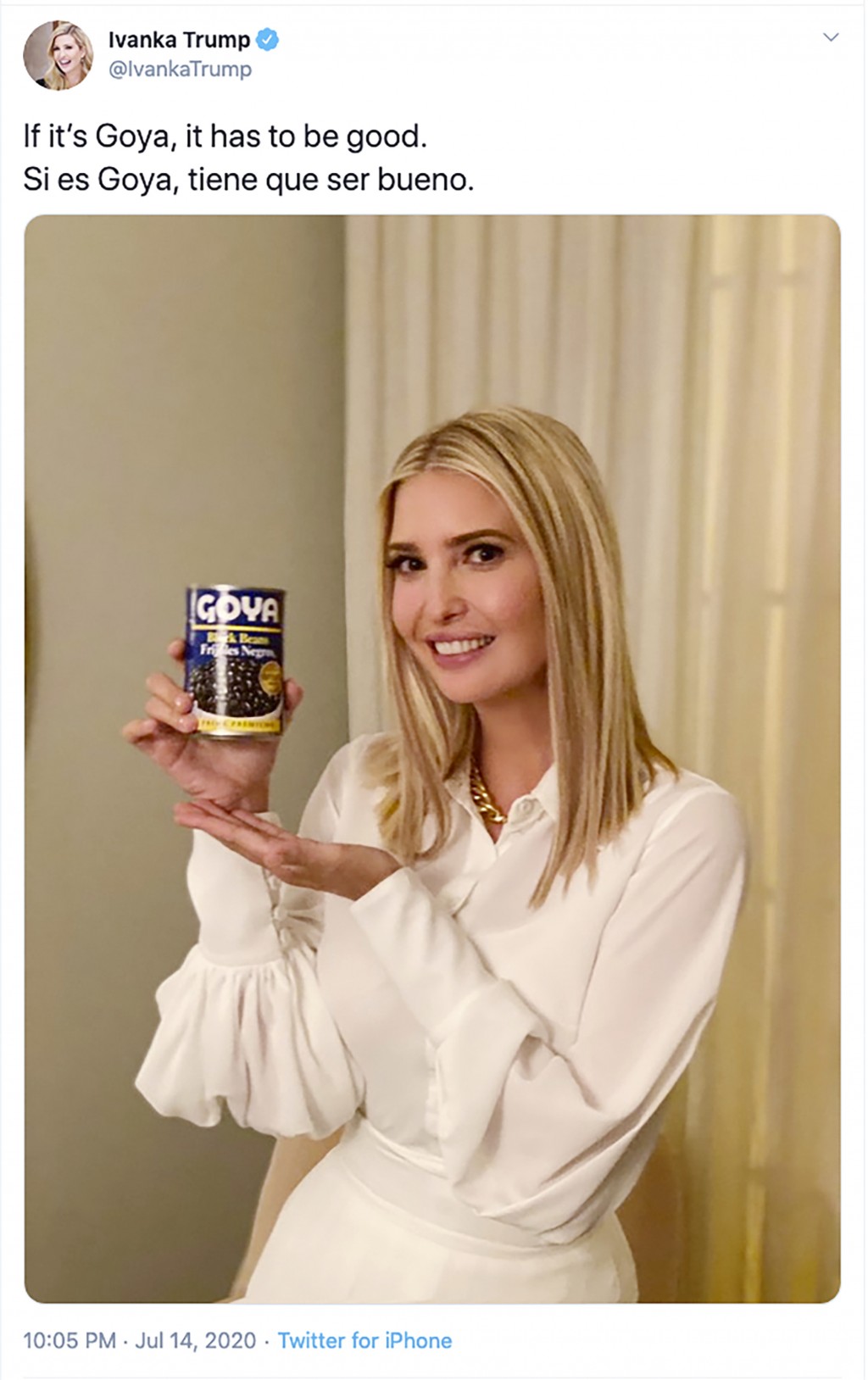 WASHINGTON (AP) — Ivanka Trump on Wednesday defended tweeting a photo of herself holding up a can of Goya beans to buck up a Hispanic-owned business that she says has been unfairly treated, arguing that she has “every right” to publicly express her support.

These groups contend Ivanka Trump's action also highlights broader concerns about how the president and those around him often blur the line between politics and governing. The White House would be responsible for disciplining Ivanka Trump for any ethics violation but chose not to in a similar case involving White House counselor Kellyanne Conway in 2017.

Goya became the target of a consumer boycott after CEO Robert Unanue praised the president at a Hispanic event at the White House last Thursday.

Trump tweeted the next day about his “love” for Goya, and his daughter followed up late Tuesday by tweeting a photo of herself holding a can of Goya black beans with a caption that read, “If it's Goya, it has to be good,” in English and Spanish.

Almost immediately, government watchdogs and social media commentators accused Ivanka Trump of violating ethics rules — an issue that was not addressed in a White House response statement that blamed the news media and the culture of boycotting certain views.

“Only the media and the cancel culture movement would criticize Ivanka for showing her personal support for a company that has been unfairly mocked, boycotted and ridiculed for supporting this administration — one that has consistently fought for and delivered for the Hispanic community," White House spokesperson Carolina Hurley said in an emailed statement.

“Ivanka is proud of this strong, Hispanic-owned business with deep roots in the U.S. and has every right to express her personal support,” Hurley said.

Trump himself appeared to back up his daughter Wednesday by posting a photo on his Instagram account showing him in the Oval Office in front of various Goya products arrayed on his desk. As president, Trump is exempt from many of the rules that federal workers must follow.

Walter Shaub, former director of the Office of Government Ethics, said the president's tweet and photo amounted to “an official campaign by the Trump administration to support Goya, making it all the more clear that Ivanka’s tweet was a violation of the misuse of position regulations.”

Shaub left government in 2017 after clashing with the Trump administration over ethics rules.

Citizens for Responsibility and Ethics in Washington said the rules are clear.

“The ethics rules for executive branch employees say that you can’t use your official position to promote a private business,” said Noah Bookbinder, executive director of CREW. “It's pretty clear that the context in which this came out is that Goya had been supportive of the Trump administration and the Trump administration was being supportive of Goya.”

Craig Holman, the Capitol Hill lobbyist for Public Citizen, said the episode was reminiscent of a 2017 incident when, during a nationally broadcast cable TV interview, Conway urged Trump supporters to buy Ivanka Trump's clothing and accessories after Nordstrom dropped the fashion line. The White House later said Conway had been “counseled” about her comments.

Holman argued that Ivanka Trump's action was less of a mistake given the Conway incident.

“They decided to violate federal law thinking that it will benefit them politically," he said. Trump is looking to improve his standing with Latino voters before November's election. He won the votes of about 3 in 10 Latino voters in 2016.

Trump often blurs the lines between politics and governing.

The president used a speech Wednesday at a UPS facility in Atlanta on environmental permitting to rail against allowing mail-in voting for the November election and against Democratic rival Joe Biden. He also used a Tuesday news conference in the White House Rose Garden, where presidents traditionally have refrained from politics, to lash out at Biden.

Last year, Trump floated the idea of hosting a 2020 summit of world leaders at his private, for-profit golf club near Miami, but backed down after a bipartisan outcry over the conflict of interest.

Separately Wednesday, CREW filed a complaint with the Office of Special Counsel against White House chief of staff Mark Meadows alleging violations of the Hatch Act during recent television interviews. The law prohibits government officials from using their positions to influence political campaigns.

There was no immediate comment from the Office of Special Counsel or the White House.