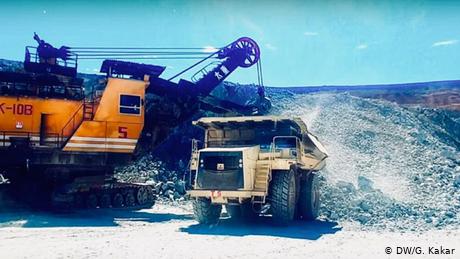 The Pakistani government allowed last week a Chinese mining company to extend its work on a copper-gold mining project in the insurgency-marred western Balochistan province.

According to local media, work has restarted on the Saindak copper-gold project – a collaboration between Pakistan and China. The mine is located near Saindak in Balochistan's Chagai district.

The mine was initially leased for a 10-year period to Metallurgical Corporation of China Limited, registered locally under the name of Saindak Metals Limited (SML).

The contract extension has angered Baloch separatists, who accuse Beijing of usurping their province's mineral resources.

The Saindak copper and gold project, which was launched in 2001, was handed over to China in 2002 for a ten-year lease. It was renewed again in 2012 and then in 2017. Pakistani authorities have now extended it for 15 more years, hoping the project would bring in $45 million (€39 million) investment to the country.

Experts say the mine has approximately 412 million tons of copper and gold reserves. Pakistani authorities said last year the country had earned $2 billion (€1.75 billion) through the Saindak project between 2002 and 2017.

Balochistan remains Pakistan's poorest and least populous province despite a number of development projects Islamabad initiated there in the past. Rebel groups have waged a separatist insurgency in the province for decades, complaining that the central government in Islamabad and the richer Punjab province unfairly exploit their resources. Islamabad reacted to the insurgency by launching a military operation in the province in 2005.

In 2015, China announced an economic project in Pakistan worth $46 billion, of which Balochistan is an integral part. With the China-Pakistan Economic Corridor (CPEC), Beijing aims to expand its influence in Pakistan and across Central and South Asia in order to counter US and Indian influence. The CPEC would link Pakistan's southern Gwadar port (626 kilometers, 389 miles west of Karachi) in Balochistan on the Arabian Sea to China's western Xinjiang region. It also includes plans to create road, rail and oil pipeline links to improve connectivity between China and the Middle East.

Last month, four gunmen attacked the Pakistan Stock Exchange building, killing at least three people including two guards and one policeman, while the four assailants were also killed by gunfire. The BLA is believed to be behind the attack.

"The BLA is being funded by India," defense analyst Amjad Shoaib told DW. "Baloch insurgents are being supported and trained by Indian intelligence agencies," he added.

In a previous interview with DW, Brahamdagh Bugti, leader of the Baloch Republican Party living in exile in Switzerland, and grandson of slain nationalist leader Nawab Akbar Bugti, said that Chinese economic projects in Balochistan were aimed at "colonizing" the province, and must be resisted.

"None of the previous development projects in Balochistan have ever been beneficial to the province or its people," Bugti said. "We have been complaining for decades that Islamabad has never sought the consent of the Baloch people before initiating these projects. It is quite obvious that they are not launched to boost the province's economy or to help people out of poverty. They are started for the benefit of the rulers in Islamabad," he added.

On Tuesday, at least three Pakistani soldiers were killed and eight others, including an officer, were injured in an ambush on the Pakistani army convoy near Gichak valley in Balochistan's Panjgur district. The Balochistan Liberation Front (BLF) reportedly claimed responsibility for the attack.

"In order to appease China, the government is giving contracts to Beijing without taking the Baloch people into confidence. The people of the province are the real owners of these minerals," Senator Akram Baloch told DW when asked about the Saindak project.

"The alleged plundering of resources will further stoke anti-Chinese feelings in the province," he added.

Addul Malik, Balochistan's former chief minister, told DW the province is not getting its due share of royalties from these projects.

Some independent researchers also endorse the claim that locals are not benefiting from the Pakistan-China collaborative projects.

"The contractual process and terms with the Chinese companies are not transparent. The Balochistan government is peripheral to these agreements. There has been little benefit to the locals despite multiple extraction operations at Saindak," Kaiser Bengali, a renowned economist and researcher, told DW.

Supporters of China's economic investment dismiss claims that Beijing is exploiting Pakistan's resources. They argue that the country needs foreign investments and that the communist country has proven to be a reliable partner so far.

"Anti-Pakistan elements are making false allegations against China. We give them contracts because they deliver. The Chinese investment will help Pakistan's economy that has been hit hard by the coronavirus pandemic. Balochistan will benefit too," Ashfaq Hassan, a member of Prime Minister Imran Khan's Economic Council, told DW.

Prominent Pakistani businessmen say that Chinese investments have generated thousands of jobs in the country and tens of thousands of people have benefitted from subsidiary projects.

Pakistan is facing a severe economic crisis due to the pandemic. With a debt of over $100 billion (€87 billion), the South Asian country is on the verge of an economic collapse. Coronavirus has rendered more than 20 million people unemployed as over 1,000 private and public sector institutions have closed their operations since March.