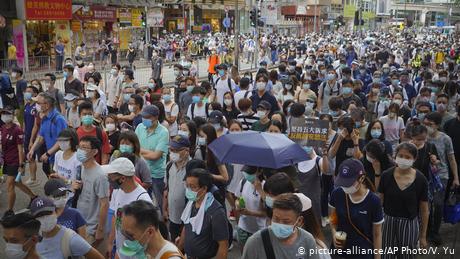 Over the last year, Hong Kong-Taiwan relations have grown closer as both find themselves in the crosshairs of more aggressive policies from Beijing. On July 1, Beijing imposed a so-called national security law on Hong Kong, triggering a sense of urgency among many Hong Kongers who are now considering leaving and are looking for immigration destinations.

Hong Kong is an autonomous Chinese territory under the principle of "one country, two systems," which recognizes Beijing's sovereignty while allowing the territory a level of civil and legal autonomy.

Read more: Hong Kong primaries: What you need to know

However, there is widespread concern that the new law puts that principle in jeopardy, and some experts consider it Beijing's final piece in the puzzle to fulfill "one country, one system" in Hong Kong.

The law criminalizes "subversion" against the Chinese government and "collusion" with foreign forces, along with having a wide interpretation of "terrorist activities."

A new life in Taiwan?

As people in Hong Kong fear being prosecuted under the law, a growing number have expressed interest in relocating to Taiwan due to its proximity and cultural similarities.

In response, the Taiwanese government opened an office on July 1 to help Hong Kongers who seek legal residency in Taiwan, in anticipation of an influx of immigrants.

"The new office was created precisely to more efficiently evaluate and process applications on a case-by-case basis," said Kolas Yotaka, spokesperson at Taiwan's presidential office, adding that existing resources are sufficient to handle the possible increase in arrivals.

According to the Mainland Affairs Council in Taiwan, which sets Taiwan's policy towards mainland China, the office has received hundreds of phone calls and emails inquiring about how to move to Taiwan within a week of opening.

Most inquiries were about how to emigrate to Taiwan through investment or how to apply for schools, according to the Mainland Affairs Council.

"We think the number of inquiries could increase as the Chinese government continues to impose the national security law. The Taiwan-Hong Kong Services and Exchange Office will closely monitor the development in Hong Kong," a council official told DW.

In 2019, amid monthslong pro-democracy protesters in Hong Kong, nearly 6,000 Hong Kongers moved to Taiwan, a sharp increase compared to the previous year, according to Taiwan's immigration agency.

A 'comfortable life' in Taipei

Since then, he reopened his bookstore, Causeway Bay Books, in Taipei, and has been vocal about the drastic changes that have been taking place in Hong Kong.

To him, life in Taiwan guarantees basic human rights and he doesn't need to worry about being arrested by the Chinese government under the national security law, which he described as "ridiculous and draconian."

"Certain books written by pro-democracy figures are viewed as banned books in Hong Kong and raising a piece of white paper during a protest can be deemed illegal under the national security law," Lam told DW.

"Hong Kong has entered the age of banned books but I can still buy all kinds of books in Taiwan.

"The Taiwanese government will not ban books in the name of ‘national security,' which shows that Taiwan's legal system is a lot more reasonable. In other words, I'm having a very comfortable life in Taiwan."

A recent survey published in the journal Foreign Policy showed that 50% of respondents considered leaving Hong Kong, out of those 29% said Taiwan was a top destination, followed by Canada and Australia.

Lev Nachman, a 2020 Fulbright research fellow in Taiwan and one of the authors of the survey, told DW the result shows that Taiwan is more culturally and linguistically adaptable for Hong Kongers.

"It also shows the unanimous support that Taiwan's civil society and political sector have shown for supporting Hong Kong people," he said.

However, Nachman said the Taiwan government needs to reveal more details about the Taiwan-Hong Kong Services and Exchange Office.

"We know there is an office to help Hong Kongers, but we don't know to what extent they will try to welcome more people," he said, adding authorities in Taipei should start "thinking seriously" about a plan for the future.

Taiwan's move to assist Hong Kong people will like trigger some heavy response from the Chinese government.

When Taiwan revealed the plan to assist Hong Kongers in May, China's Taiwan Affairs Office warned Taipei not to interfere with Hong Kong affairs.

Government spokesperson Yotaka said Taiwan has no intention to manipulate the democratic movement in Hong Kong, and it is determined to keep helping Hong Kong people who might face persecution on a humanitarian basis.

"Since we can expect a large number of Hong Kong people moving to Taiwan over the next few years, it's important to find a way to extend our culture, language and lifestyle in Taiwan," said bookseller Lam Wing-Kee. "If we can gather all Hong Kong people in Taiwan, it can become a way for us to revive the city in our new home."