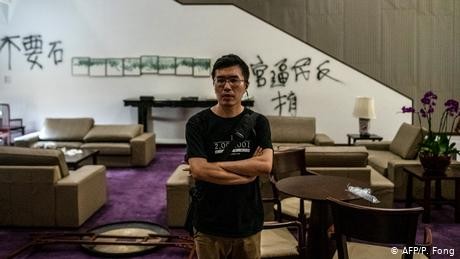 He announced his withdrawal from primary election duties in a Facebook post, citing risks to his safety, following Hong Kong Chief Executive Carrie Lam and Chinese officials' warnings that the elections could mark a violation of the contentious legislation.

"Withdrawal is the only choice (I have, to) ... protect myself and others," Au said in a Facebook post.

The decision was due to the "accusation from the Liaison Office and Hong Kong and Macau Affairs Office recently that they were illegal," he wrote. "Even though the democratic camp has emphasized repeatedly that the primary election is legal, the ruling coalition insists on another view which is creating a risk of personal safety."

The primary polls were set up to select candidates to stand in the September elections for the Legislative Council, Hong Kong's governing body.

Read more: Hong Kong primaries: What you need to know

A 'blatant challenge' to the law

The election came shortly after China imposed a sweeping new security law on Hong Kong, banning secession, subversion, terrorism and collusion with foreign forces. Carrie Lam said on Monday that the elections could be seen as subversion, as they were designed to stop the government from putting through legislation.

Pro-democracy politicians had in the past said they would try to blocks bills and budget measures in the Hong Kong parliament if they won a majority. If, for the first time, they won 35 or more seats out of 70, it would also allow them more power to veto pro-establishment legislation.

On Tuesday, China's Hong Kong and Macau Affairs Office called the weekend poll "illegal manipulation" and a "blatant challenge" to the security law.

So far, results show that 16 candidates from "resistance" or "localist" camps were elected, while the traditional democrats secured just 12 votes. The strong performance of the resistance camps shows a potential political shift to more radical ideals in Hong Kong, amid pushback against the security law and other attempts by Beijing to secure its grip on the city.

The remaining results are expected later on Wednesday.