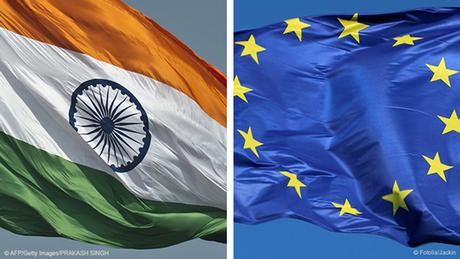 The leaders of the European Union and India are holding the 15th India-EU summit on Wednesday via video conference. The EU is represented by European Council President Charles Michel and European Commission head Ursula von der Leyen, while the Indian side is led by Prime Minister Narendra Modi.

PM Modi was scheduled to visit Brussels in March for the summit, but his visit was canceled in view of the coronavirus outbreak.

As COVID-19 reveals the glaring deficiencies of the prevailing global order, both India and the EU are expected to reiterate strong commitment to a rules-based multilateral order and seek ways to offset the adverse health and socioeconomic impacts brought about by the pandemic.

The summit is "expected to discuss developments around the COVID-19 pandemic and contemporary global matters of interest to both sides," India's Foreign Ministry spokesperson, Anurag Srivastava, said last week.

Both the EU and India have been hit hard by the health emergency and dark clouds are hanging over their economies.

Read more: India, the EU and the hard realities of a post-Brexit world

The European Commission said last week that the economy of countries sharing the euro currency would likely retract by 8.7% this year. Eurozone nations like France, Italy and Spain, which sustained the heaviest COVID-19 tolls, would all contract by more than 10% before partially recovering in 2021.

The Indian economy, on the other hand, is forecast to shrink 4.5% this year, according to International Monetary Fund (IMF) projections, before bouncing back to 6% growth next year.

Increasing trade barriers worldwide are compounding both sides' economic woes. Amid growing backlash against globalization and international supply chains, many governments are encouraging and subsidizing companies to bring back production to their home markets.

In an attempt to make a stand against the growing protectionist tendencies, India and the EU could seek a way forward to resume talks on the long-pending bilateral free trade deal, known as the EU-India Broad-based Trade and Investment Agreement (BTIA).

"As far as the much-talked FTA with the EU is concerned, the only FTA that we would like to pursue right now is the one with the Americans. I don't know whether we would like to open our markets for the Europeans right now," he said.

This view is shared by Sreeram Chaulia, Professor and Dean at the Jindal School of International Affairs in India.

"The FTA has been frozen for years and right now, given an economic depression like scenario, most countries are expected to turn very protectionist and impose more and more tariff barriers," Chaulia told DW. "So I don't see a liberalized kind of forward movement happening."

Trade negotiations between the two sides have been stalled since May 2013 due to disagreements over key issues like tariff cuts and intellectual property rights.

Brussels wants New Delhi to slash import duties on a range of products like wines, automobiles and dairy products, and implement a robust intellectual property regime. India, for its part, is demanding that it be granted data secure nation status by the EU. The country is among the nations not considered as data secure by the EU.

Despite disagreements on the trade front, defense and security cooperation between the two sides has been on the upswing and the EU has emerged as a strategically important partner for India.

"As far as the non-economic stuff goes, that is more interesting" for India-EU ties, said Chaulia. "The Europeans are trying to come up with a new China policy and we would want them to think of India as a partner in a global setting."

For the Europeans, the expert said, it matters little if China is bullying countries in the South China Sea region or engaging in faceoffs with India. "Even though they know about India's latest confrontation with China and the fact that Indian troops were killed, I didn't hear much from Josep Borrell or any of the EU bigwigs like Angela Merkel."

Chaulia added: "But they do care about human rights and on those counts they do see China negatively in terms of what is happening in Xinjiang, Hong Kong or Tibet."

Still, the expert stressed that the EU as a whole is unlikely to join forces in the kind of counter-balancing coalition India is now thinking of joining, because many European countries have very strong economic ties and interdependence with China.

"But we can work with individual countries, like we are doing a lot with France in the Indian Ocean region."