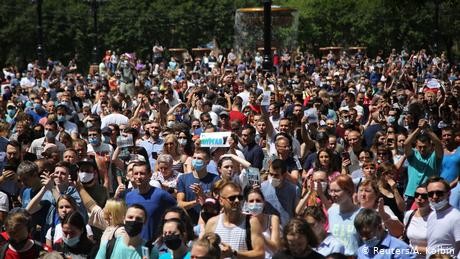 The recent constitutional change to allow Vladimir Putin to serve a third consecutive — and fifth overall — term as Russia's president has further cemented his hold on power. The referendum that made this step possible was framed as having signaled broad public support for the president and his policies. But, just two weeks after that vote, Putin faces a serious domestic challenge. Protesters have taken to the streets since the July 10 arrest of Sergei Furgal, the popular governor of the eastern province of Khabarovsk. Last Saturday, tens of thousands of Russians protested in the city of Khabarovsk — making it the largest political protest ever to have been staged there. Some protesters were heard shouting "Putin must go!" and "Putin is a thief!"

Khabarovsk lies near Russia's border with China. Its economy is based mainly on forestry and fishery. The region is not exactly known as an opposition bastion. Even so, Khabarovsk province caused a minor political sensation when the governor of Putin's United Russia party was voted out of office in autumn 2018, with Furgal succeeding him.

Investigators accuse the governor of having ordered the murder of two businessmen about 15 years ago. Furgal denies the accusation.

Furgal, 50, is a member of the nationalist Liberal Democratic Party of Russia, which controls the governments of seven eastern provinces. While officially an opposition party, it has been largely toeing the Kremlin line.

The governor made a name for himself as an affable leader who cut red tape and implemented social policies, a 29-year-old businessman named Ruslan Ibragimov said: Furgal "lowered the price of plane tickets and made sure schools served better meals." Ibragimov said government agencies were working more efficiently under Furgal.

The Kremlin, however, had found Furgal's 2018 victory hard to stomach. Just a few months later, Putin decided to move the provincial capital from Khabarovsk to Vladivostok. "That step hurt, but people accepted it," Ibragimov said. But the people will not tolerate Furgal's arrest, he added.

Many residents suspect that Furgal's arrest was an act of revenge. After all, over a third of the province's 1.3 million inhabitants voted against Putin's constitutional reform. Across Russia, on average, only 21% opposed the change.

Fabian Burkhardt, of the Leibniz Institute for East and Southeast European Studies, said there might be different grounds for Putin's aversion to Furgal. "I think the reason is that Furgal's LDPR party dominates the regional parliaments and city council," says Burkhardt. He believes this has been a thorn in the Kremlin's side and it is now "trying to uproot the LDPR system and regain control."

So far, the Kremlin has refrained from cracking down on the protests, which were not authorized. Russian police has not, as is typical, taken a heavy handed approach to disperse protesters — for which Putin's spokesperson Dmitry Peskov lauded them on Tuesday. He said it was commendable that no "provocations and incidents" had occurred. And Putin's regional representative, Yury Trutnev, even declared that "the people have a right to express their opinion."

The Moscow-based analyst Nikolay Petrov is surprised that the "Kremlin did not expect this pushback." He said Kremlin officials had misjudged the region and that the "brutal removal of Furgal was simply one step too far." ”The Kremlin cannot maneuver itself out of this situation,” he said. "There is no way out without further damage." Petrov said he ultimately expected that the Kremlin will put its foot down in a show of force.