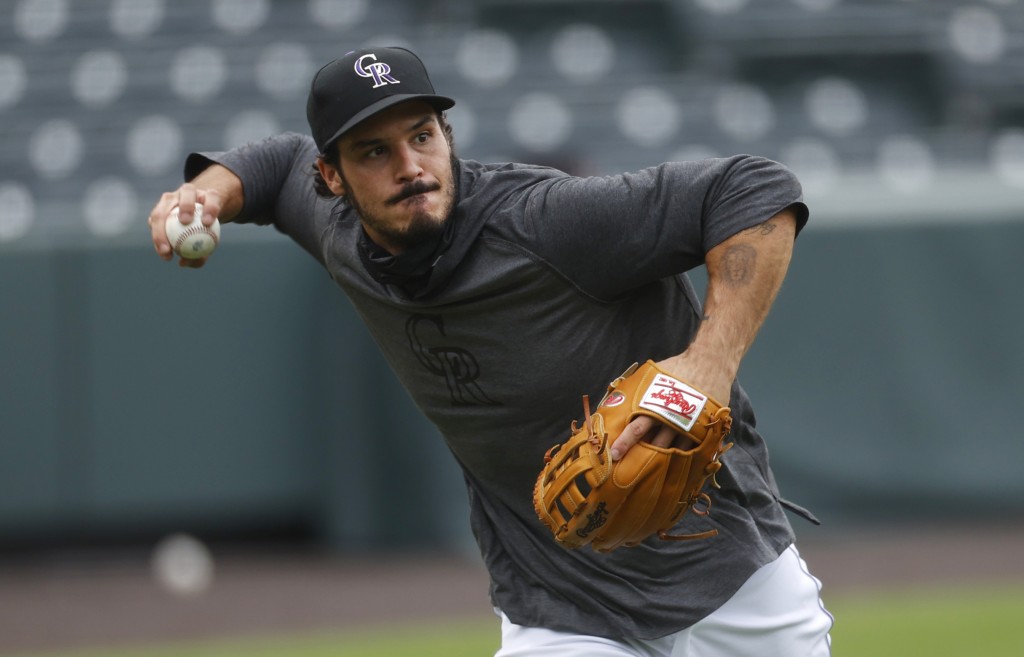 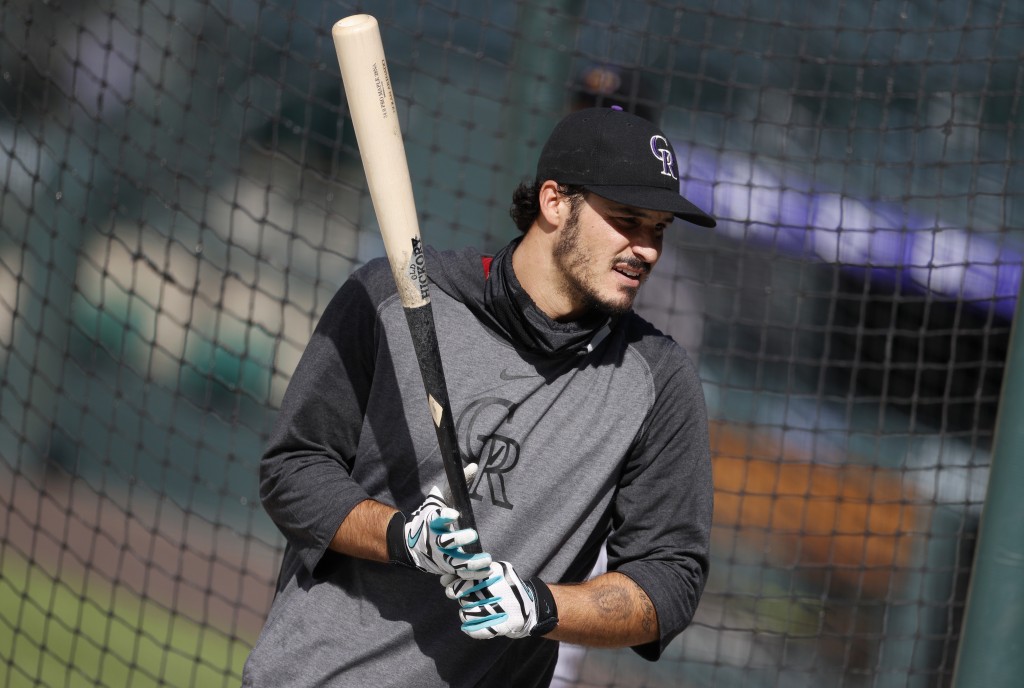 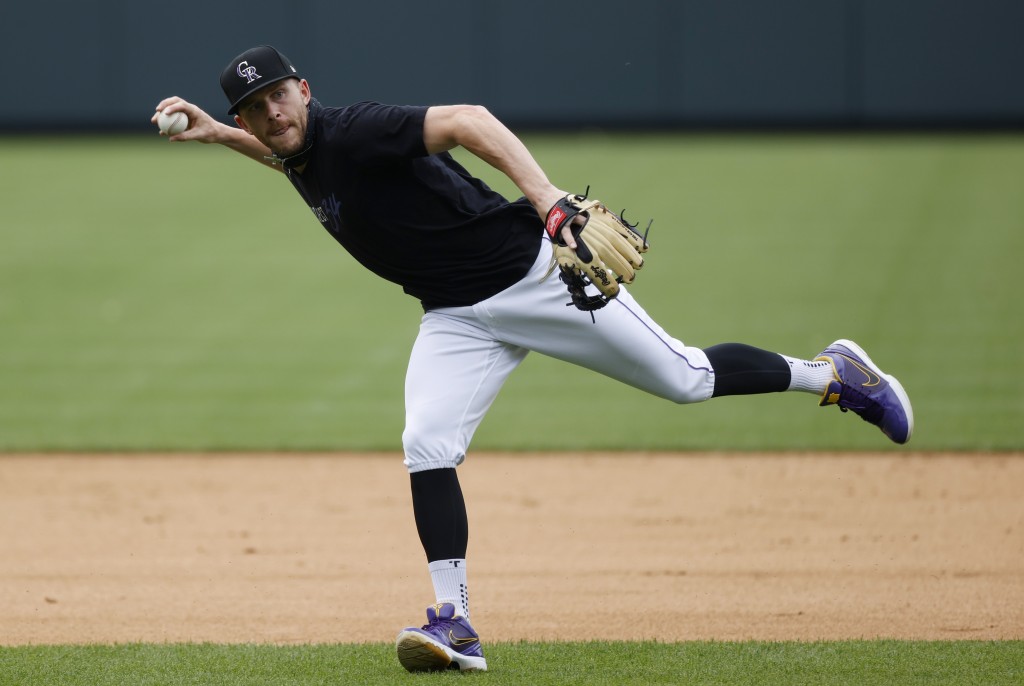 DENVER (AP) — All those fastballs that ended up bouncing around the water fall, fountains and pine trees at Coors Field during summer camp mean one of two things for the Colorado Rockies.

Either their pitchers are rusty and the team might be in for a long haul of a 60-game season or slugger Nolan Arenado is already in midseason form and opponents had better watch out.

The Rockies insist it’s the latter.

“I’ve hit some mistakes,” Arenado acknowledged during a power surge that featured two moon-shot homers in an intrasquad scrimmage. “I think that’s hitting, right? You’ve got to be able to take advantage of the mistakes.”

Are the Rockies once again ready to rake at the plate but flounder from the mound?

Arenado said he wasn’t worried about seeing so many misplaced pitches in camp, suggesting it was just a case of him making them pay the price.

“They’re working on different pitches, they’re trying to get their pitch count up," Arenado said. "As we get closer, yeah, you want them to be better. But we’re all working on things.”

That includes All-Star outfielder Charlie Blackmon, the first Major League player known to have tested positive for the coronavirus.

Blackmon got sick last month and returned to the Rockies on July 13 after getting the all-clear.

“I wasn’t worried. I felt sick, but it was nothing compared to me having the flu,” Blackmon said, adding he was only sick for about 36 hours. “Looking back on it, I wish I had gotten this months ago and felt crappy for a day and a-half and then got on with it and lived the rest of my life and not have tried to avoid it by canceling everything in the country.

“That’s only based on my experience. It can be much more serious for” others, Blackmon added.

Arenado was glad to have his fellow slugger back.

“We know how much we need him and how important he is to our group,” Arenado said. “It’s not like if Chuck’s out, you’re going to plug in a guy who does exactly what Chuck does. You know, what Chuck does is pretty special."

Blackmon hopes to be ready for the Rockies’ opener at Texas on July 24.

The Rockies have a bit of a different look this year with Ian Desmond sitting out the season, in part because of the coronavirus, and longtime Colorado tormentor Matt Kemp donning purple pinstripes.

With Desmond's departure, the Rockies lost a clutch bat and popular clubhouse presence.

Enter Kemp, who finally gets to play half his games at Coors Field. The Rockies are hoping he proves it was the ballpark he’s always found so friendly and not Rockies pitching.

“I’ve had a lot of success here,” Kemp said. “This has been one of my favorite parks to play in. Now, I get to put on this jersey and play with some of my favorite players that I’ve been playing against. It’s going to be fun to be here and be a part of this lineup.”

Kemp made his third All-Star team in 2018 while with the Dodgers but a rib injury limited him to 20 games with the Reds last year. The Marlins jettisoned him after the March 13 shutdown, and he signed with Colorado following Desmond’s departure.

“I know I still got a lot left in me, a lot left in the tank,” Kemp said. “Coming up as a younger guy, there were a lot of guys playing at a high level at 35 years old. ... I feel I can still hit with the best of them and do what I have to do to help the team win.”

Kemp owns a .327 batting average with 21 home runs and 77 RBIs over 86 career games at Denver’s downtown ballpark, including his only career cycle, for San Diego.

BULLISH ON THE BULLPEN

In a 60-game season, relievers could prove even more integral than the starting rotation.

“Our bullpen gives me optimism,” manager Bud Black said. “Couple of reasons: the growth of Jairo Diaz and Carlos Estevez last year, what Scott Oberg did all of ’19, I think Wade Davis is going to bounce back. I think some other pieces that we’re looking at right now are going to be contributors."

So, it’s not all about German Marquez, Jon Gray, Kyle Freeland, Antonio Senzatela and Peter Lambert.

“There’s no question that bullpens are going to be a big factor the first two or three weeks when starting pitchers are on a pretty limited pitch count,” Black said.