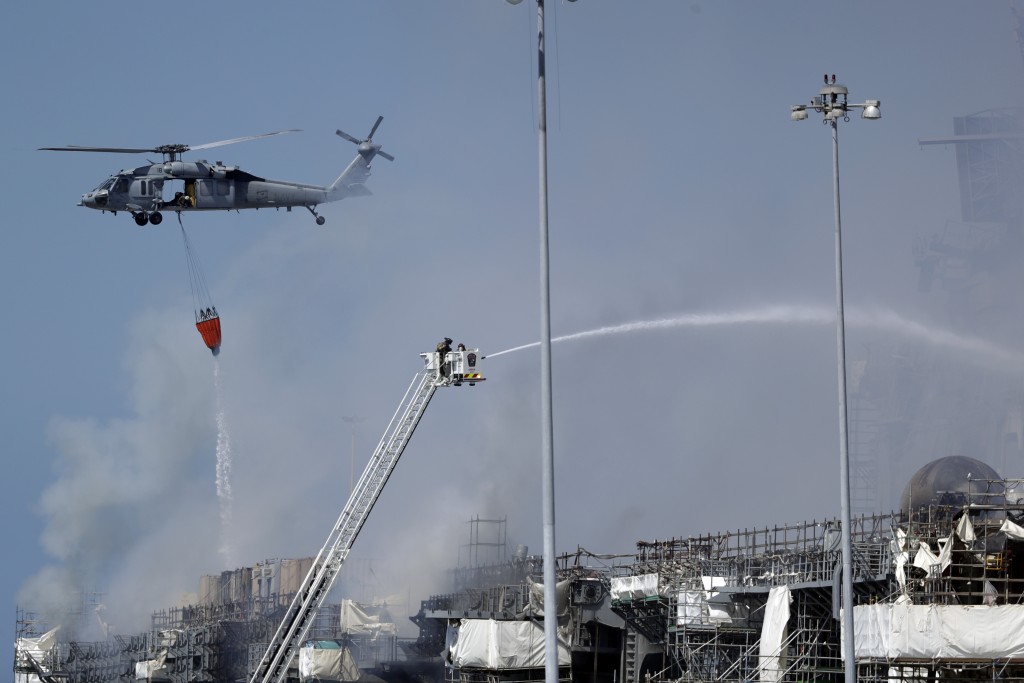 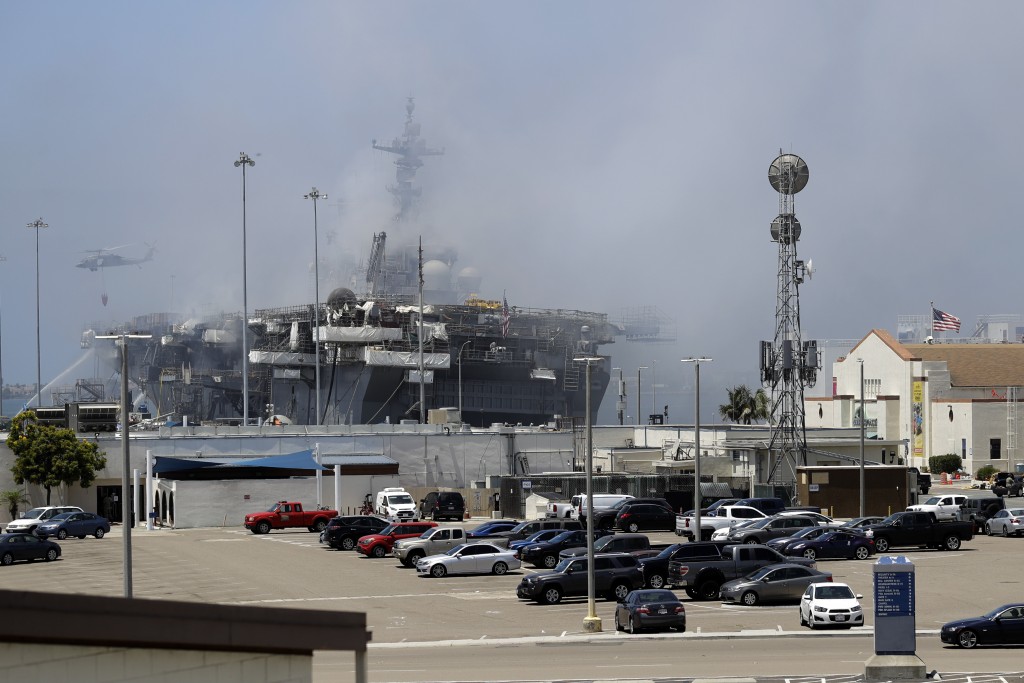 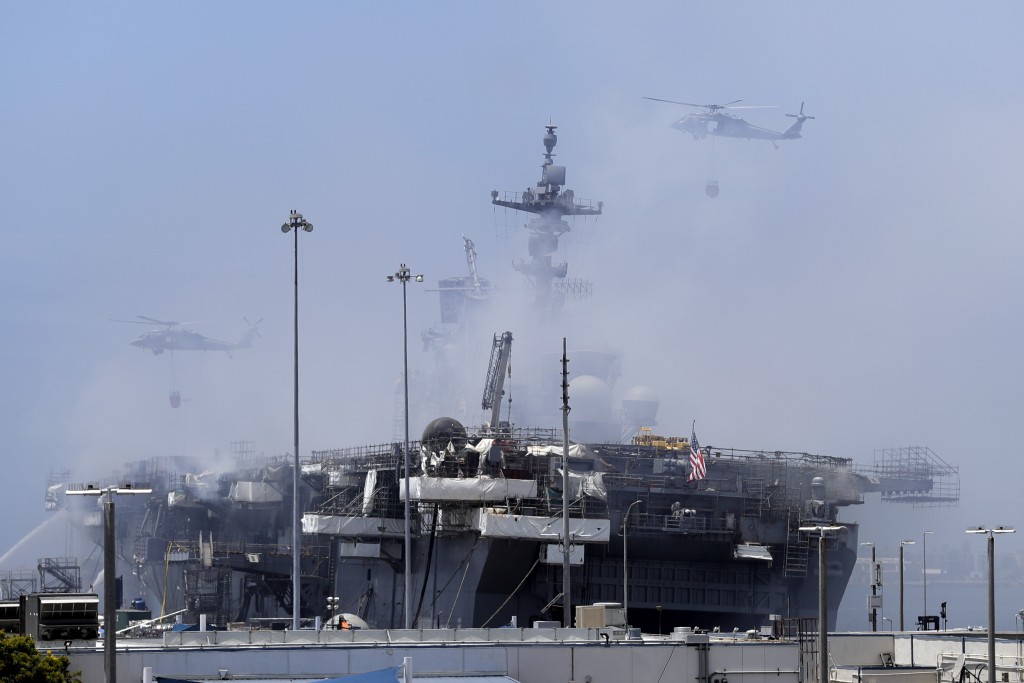 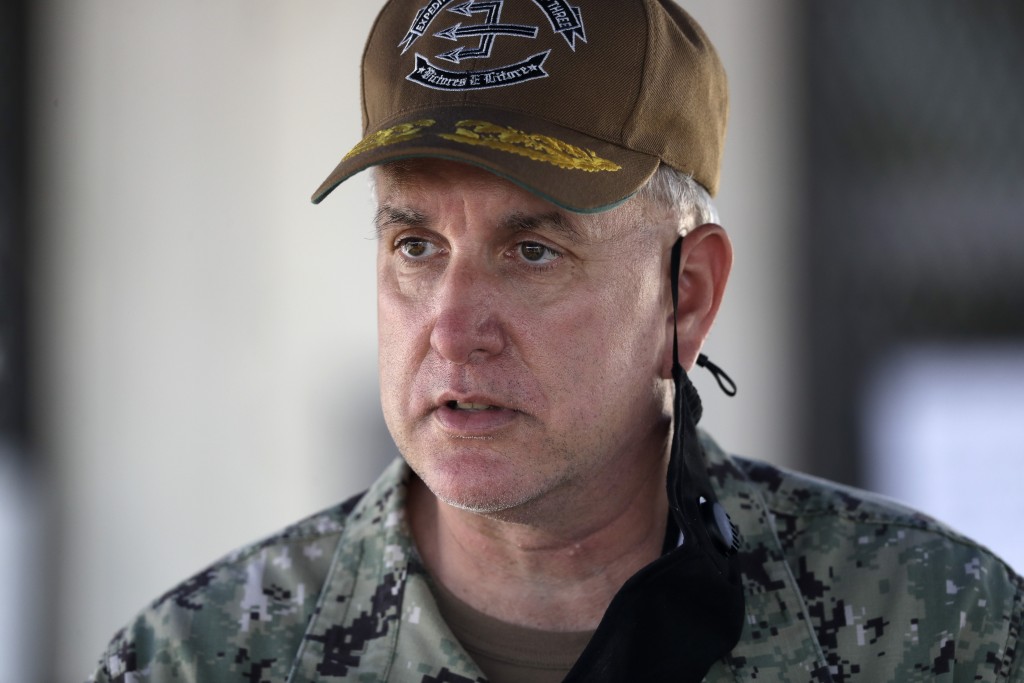 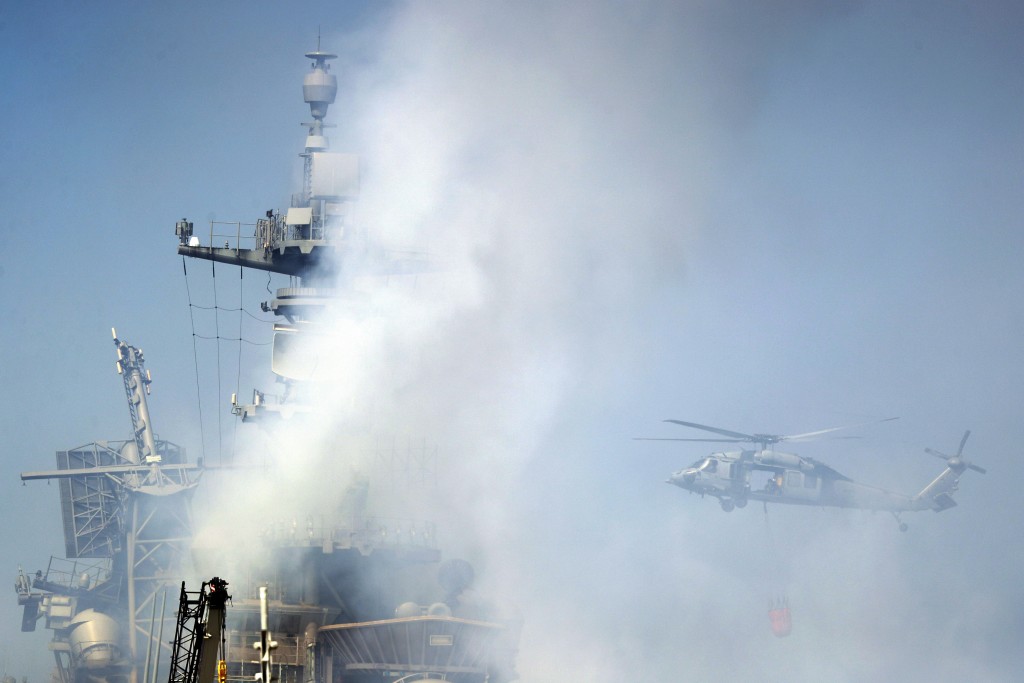 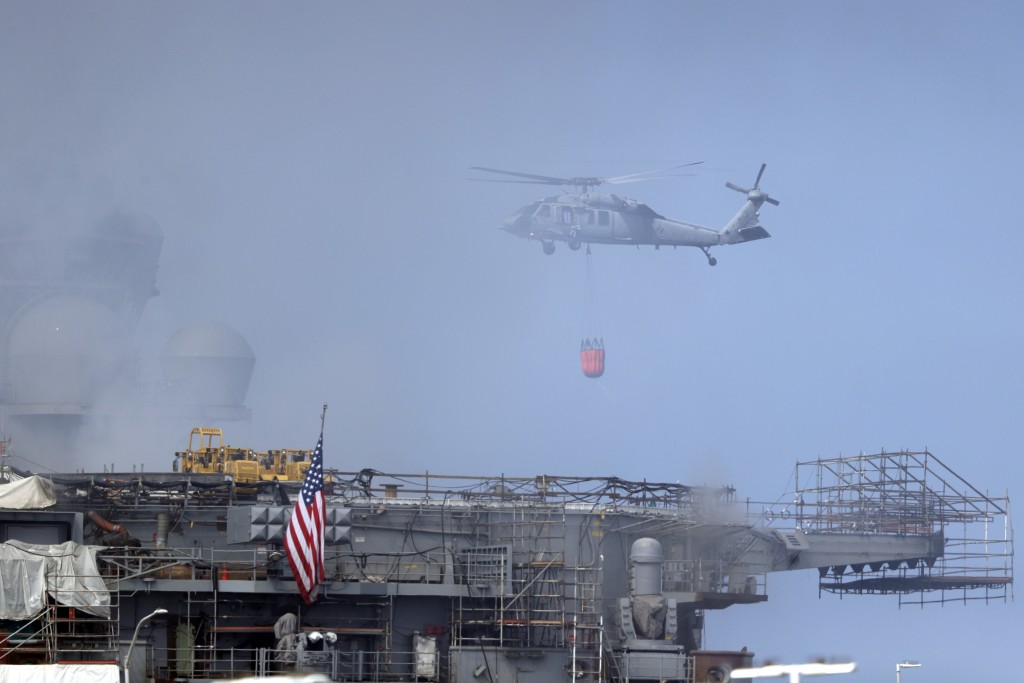 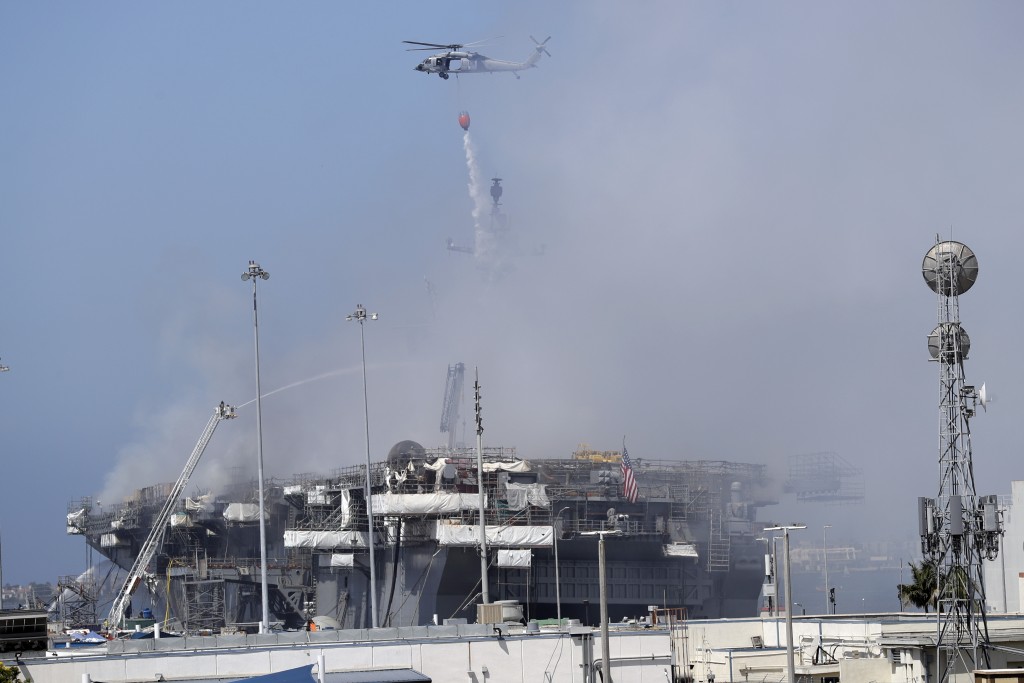 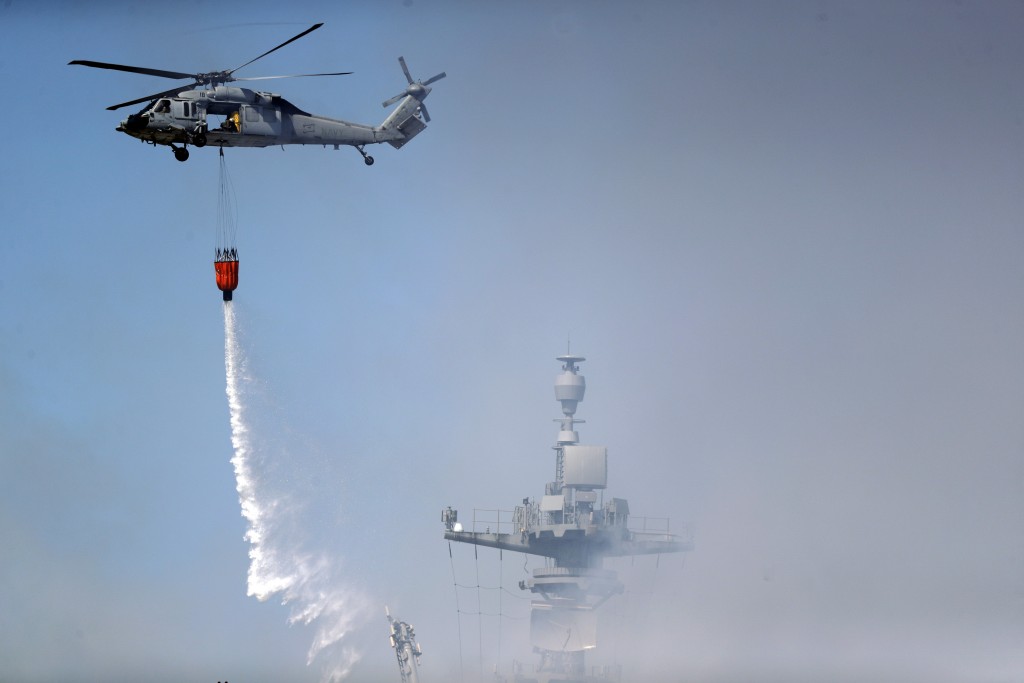 SAN DIEGO (AP) — The battle to save the USS Bonhomme Richard from a ravaging fire entered a third day in San Diego Bay on Tuesday with indications that the situation aboard the amphibious assault ship was improving.

The U.S. Navy said in a statement late Monday that firefighters were making significant progress with the assistance of water drops by helicopters.

The ship was emitting much less smoke than the previous two days, when acrid billows poured out and blanketed parts of the region.

The Navy, meanwhile, has taken precautions in case the warship sinks and potentially releases 1 million gallons (3.8 million liters) of oil on board into the harbor.

The U.S. Coast Guard has hired an oil clean-up crew to put a containment boom in place that could be ready if any oil is spilled. It also halted boat and air traffic within a nautical mile of the vessel.

On Monday, health officials warned people to stay indoors as acrid smoke wafted across San Diego from one of the Navy’s worst shipyard fires in recent years. At least 59 people, including 36 sailors and 23 civilians, have been treated for heat exhaustion, smoke inhalation and minor injuries. Five people who had been in a hospital under observation were released.

Some 400 sailors along with Navy helicopters and local and federal firefighters poured water on the carrier-like ship, which erupted in flames Sunday morning.

Rear Adm. Philip Sobeck said fire temperatures had reached up to 1,000 degrees (538 Celsius), causing the mast of the ship to collapse and threatening the central control island where the captain operates the vessel. He said there were about two decks between the fire and the fuel supplies.

Water being dumped on the vessel was causing the 840-foot (255-meter) ship to list to one side, but crews were pumping off the water.

Sobeck said it was too soon to give up on saving the 23-year-old amphibious assault ship, which has been undergoing maintenance since 2018.

“I feel absolutely hopeful because we have sailors giving it their all,” said Sobeck, commander of Expeditionary Strike Group 3.

The fire was first reported in a lower cargo area where seafaring tanks and landing craft are parked. It appears to have started where cardboard boxes, rags and other maintenance supplies were being stored, Sobeck said.

A fire suppression system had been turned off because it was being worked on as part of the ongoing maintenance. The system uses Halon, a liquefied, compressed gas that disrupts a fire and stops its spread by cutting off its oxygen.

Sobeck said there was no ordnance on board the ship and he did not believe there was anything toxic.

However, the flames were burning plastic, cabling and other materials, sending a haze over downtown San Diego. The San Diego Air Pollution Control District warned that concentrations of fine particulate matter could reach unhealthful levels in some areas and that people should avoid exercising outdoors and stay indoors if possible to limit exposure.

Retired Navy Capt. Lawrence B. Brennan, a professor of international maritime law at Fordham University in New York, said there is a risk of the hull rupturing, which could cause the ship to spill its oil.

“If this is a million gallons of oil that ends up settling on the bottom of the San Diego Harbor and can’t be removed safely, we’re talking about billions of dollars of environmental damage,” said Brennan, who has investigated and litigated hundreds of maritime cases.

The ship can be used to deploy thousands of Marines to shore and has the capacity to accommodate helicopters, certain types of short-takeoff airplanes, small boats and amphibious vehicles.