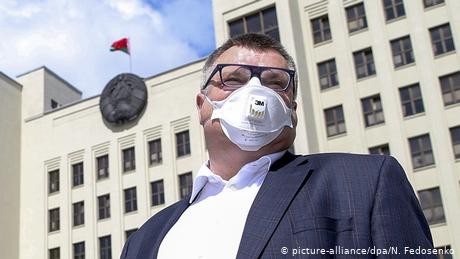 The Belarusian election commission on Tuesday declined to register businessman Viktor Babariko as a candidate for the country's upcoming presidential election on August 9.

He would have contested incumbent President Alexander Lukashenko who is seeking his sixth term in office. Lukashenko has held the presidency since the office was established in 1994, but public support for him is low.

The commission's chairwoman read out allegations that Babariko failed to declare all his earnings and that his campaign used financing from a foreign organization.

The commission then unanimously voted against his candidacy.

Babariko was detained in June after being accused of crimes including taking $430 million (€378 million) out of the country in money-laundering schemes. Rights group Amnesty International recognizes him as a prisoner of conscience.

No rivals for presidency

The businessman was widely seen as incumbent Lukashenko's main rival for the presidential post after he gained the necessary 100,000 valid signatures from supporters to run in the election.

A Babariko representative said the accusations were part of a criminal case that has not yet been heard.

The commission on Tuesday also rejected the candidacy of Valery Tsepkalo another popular opposition figure and a former ambassador to Washington, citing a lack of valid signatures.

The commission permitted the candidacy of Svetlana Tikhanovskaya, the wife of a jailed vlogger.

In June, Minsk became the center for anti-government protesters who took to the streets of the capital chanting "psycho 3%" — referring to an online opinion poll showing just 3% support for Lukashenko and his dismissal of the coronavirus pandemic as a mere "psychosis."

Lukashenko has refused to impose a strict coronavirus lockdown in the country and is going ahead with elections despite the country of over 9 million people confirming more than 65,000 coronavirus cases.

In response to the protests, Lukashenko shut down the internet and sent police to arrest demonstrators and journalists.

There are now no obstacles to Lukashenko's presidential bid.