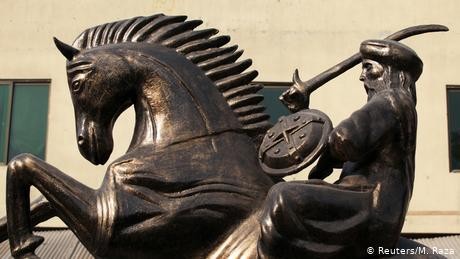 Kanwal K is a school teacher in the city of Rawalpindi in Pakistan's Punjab province. Kanwal tries to dedicate as much time as possible to her three children as she works around the clock to make ends meet. Her 14-year-old son, Ali, has recently bought a new toy sword and passed down his old toy gun to his enthusiastic little brother. Meanwhile, Nadia, their 10-year-old sister, says she is not at all interested in violent games but that looking at her brothers play with toy guns nevertheless makes her feel "proud" because "toy guns suit boys."

Kanwal said she doesn't understand why her sons love to play with toy weapons but she noticed that in general "children keenly watch action movies." Most recently, Turkish historical drama "Ertugrul" is the latest favourite among Pakistan's youth.

"The show is not vulgar and all family members can enjoy watching it," Kanwal said approvingly, adding that she thinks the show has also raised awareness among children about their history.

Dubbed the "Muslim Game of Thrones," Dirilis: Ertugrul, or "Resurrection: Ertugrul," has earned a mass fan following in Pakistan where it is now a household name.

Praised by Pakistani Prime Minister Imran Khan, who himself has encouraged fellow Pakistanis to watch the series, Kanwal is certain Ertugral must be historically accurate and beneficial for her children.

Alternative to Hollywood and Bolllywood?

Within just two months, more than 58 million people viewed the first episode of Ertugrul streamed on the Pakistan Television Cooperation (PTV) YouTube channel. The series has had more than 250 million views to date.

The epic drama narrates the life of the protagonist Ertugrul Bey, father of the founder of the Ottoman Empire Osman Bey. Set in the 13th century, the first season featured a Turkish campaign against Crusaders in Anatolia, the second season features a battle against the Mongols, and the third season, a war with the Christian Byzantines.

Broadcast on Turkey's state-run network TRT 1, the blockbuster series features exotic locations, glamourous and charismatic characters from the region, as well as mesmerizing high-tech special effects. Striking a closer chord to home, Ertugrul has become an appealing alternative to both Hollywood and Bollywood films in Pakistan.

But the mega-hit series is not without its criticisms. Not only questioned for its factual accuracy, the drama has also been accused of promoting Islamic fundamentalism and Turkish nationalism, with the series' key themes corresponding to President Recep Tayyip Erdogan's populist appeal.

"It's not new at all that political parties and regimes of all shades and ideological leanings have done that in the past. The problem right now is that it is being done to deliberately exclude any other alternative view of history. The space for any other voice is being encroached and such populist productions are being forced on masses," Zaidi said.

Nevertheless, the Pakistani government has lauded the series.

Residents of Lahore have even erected two statues in the northeastern city to pay tribute to the medieval Turkish leader. It has become a popular tourist attraction for both locals and fans.

Khan advocates use of film

In a bid to promote Islamic culture and values among Pakistani youth, Khan had issued special instructions to the state broadcaster to air the series.

"Over here, we go to Hollywood then Bollywood and back again – third-hand culture gets promoted this way," Khan announced, referring to the influence of foreign shows in Pakistan.

Last September on the sidelines of the United Nations General Assembly, Khan proposed the idea of launching a television channel to counter inaccurate perceptions of Islam as well as Islamophobia in the western world in a trilateral meeting with Erdogan and Former Malaysian Prime Minister Mahathir Mohamad.

Following the meeting, Khan tweeted, "Misperceptions which bring people together against Muslims should be corrected; issues of blasphemy should be properly contextualised; films would be produced about Muslim history to educate our own people and the world; Muslims should be given a dedicated media presence."

Iffat Omar, a popular actress, told DW that by airing Ertugrul, PTV is working in tandem with the government agenda. "The same thing happened during General Zia ul Haq's era [in the 1980s]. Once again, we are being taught a distorted version of Islamic history. Imran Khan thinks of himself as a heroic character of Islamic history. He suffers from severe self-deception and believes he can resolve all issues of the Muslim world with his charismatic personality." Omar said that the Pakistani government instead "should focus on films and drama that promote peace and coexistence," adding: "We have suffered a lot from hatred."

While some view the drama as a harmless, entertaining way of escaping from Pakistan's current reality, mental health experts warn thatErtugrul could have lasting psychological impacts on children.

Nancy Hartevelt Kobrin, a psychoanalyst and expert in Islamic literature, told DW that films such as Ertugrul normalizes violence and chauvinist behaviour. She says children are at particular risk of becoming trapped in violent fantasies from violent film exposure and tend to imitate such characters in their games. She added that Ertugrul's themes of honor and shame can also prove detrimental to a child's wellbeing.

"Shame destroys the soul of a child early on. Often such a drama is said to 'brainwash,' but it is much worse than that as it ignites communally shared violent fantasies," Kobrin warned. "A child has not yet learned to separate fantasy from reality nor put words to terror. Such a drama incites violence in real time against the 'other' – be they non-Muslims or those who are not 'radical' enough."

Filmmaker Zaidi reminds that a series like Ertugral could have a lasting impact on generations to come. "In Pakistan, an entire generation grew up in the 1980s consuming similar eulogies of an imagined Islamic produced by the state broadcaster. That generation has no sense of history and is still at a loss."