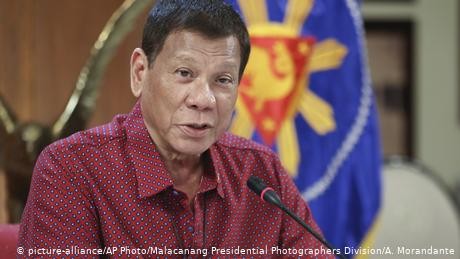 A review of President Rodrigo Duterte's fourth year in office included a damning UN Human Rights Council report on widespread extrajudicial killings, the passage of a widely contested anti-terrorism legislation and a bungled response to the coronavirus pandemic.

In the Philippines, the head of state holds office for a six-year term but is barred from running for reelection.

"Laws and policies to counter national security threats and illegal drugs have been crafted and implemented in ways that severely impact human rights. This has resulted in thousands of killings, arbitrary detention and vilification of those who challenge these severe human right violations," said Bachelet, who presented the report findings to the UN Human Rights Council in Geneva, Switzerland.

Citing open source documents, media reports and testimonials from victims and their families, the report detailed how extrajudicial killings were carried out with near impunity.

Responding to the report findings through a video message played during the UN session, Philippine Justice Secretary Menardo Guevarra said that the Philippines had set up an inter-agency panel that would investigate the claims of extrajudicial killings and "judiciously review" the more than 5,600 police operations where deaths occurred.

Cristina Palabay, secretary-general of human rights watchdog Karapatan, is skeptical of Guevarra's claim. "We have been on this road before. Task forces and commissions were created but do not deliver justice and accountability. These were used as tools for whitewashing," said Palabay in a statement.

Citing police data, Banac said that since the start of the state's crackdown on illegal narcotics, police arrested more than 330,000 suspected drug users while 7,673 died in shootouts with law enforcement.

"One death for every 43 arrests does not add up to widespread killing. Rather, it implies the real intention of law enforcement to arrest the offender and uphold the law," Banac told DW.

The release of the UN report coincided with Duterte's signing of a counterterrorism bill into law over the weekend. The legislation has been widely contested for its vague definition of terrorism and the wide powers its gives security forces to arrest suspected terrorists without a warrant and detain them without charges for a longer period of time.

Critics warned that with the administration's track record of disregarding human rights and civil liberties in enforcing law and order, this new law would be used to further quell legitimate dissent.

"With Duterte's signing into law of the Anti-Terrorism Act, we find it hard to be hopeful that things are going to get better for human rights under this administration," Llore Pasco said in a press conference. Pasco's two sons were killed in a police operation.

Citizens broke quarantine regulations to take to the streets in protest when the law was signed last Saturday.

"With the anti-terrorism act as part of the law of the land, it is as if the Philippines is permanently under a situation worse than martial law," said retired Supreme Court Justice Antonio Carpio.

Carpio is among the lawyers and human rights defenders who plan to contest the implementation of the law by filing a petition before the Supreme Court to question the law's constitutionality.

However, the COVID-19 pandemic is perhaps the biggest test of the Duterte administration's performance. The government has been criticized for employing a militarized approach to a public health crisis. The COVID-19 response team appointed by Duterte is headed by former generals and the focus has been on law and order, resulting in thousands getting arrested for violating quarantine protocols.

The country now has the highest number of COVID-19 infections in the southeast Asian region. Authorities have also been criticized for low rates of testing and a weak contact-tracing mechanism.

Presidential spokesperson Harry Roque, however, said that "it has been a great four years" and that the only glitch was the COVID-19 pandemic, which is affecting all sectors.

"It was actually a great performance as far as the economy is concerned. Unfortunately, we were hit by a pandemic. But surveys show that many Filipinos approve of the president's actions," said Roque in a press conference.

The Philippine economy recorded rapid growth over the past couple of years but contracted in the January-March quarter this year, marking the economy's first contraction since 1998.

An estimated 7.3 million have been rendered jobless because of lockdown restrictions that closed businesses and ravaged the economy.

Public opinion polls released last month showed that as much as 43% of Filipinos said they expected their quality of life to worsen in the next 12 months.