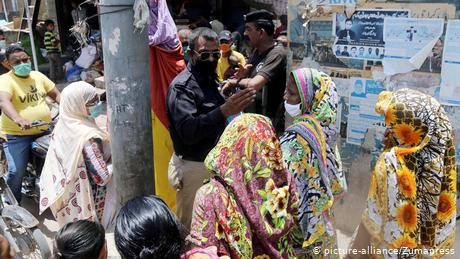 "Many families realize too late that a divorced daughter is better than a dead daughter," Khadija Siddiqi, a survivor of gender-based violence, told DW.

Siddiqi, who is a lawyer by profession, is of the view that domestic violence has increased sharply during the COVID-19 pandemic because women are forced to compromise even more due to financial constraints.

According to rights organizations, women working in the informal sector are most impacted by domestic violence during the pandemic. Many have lost their jobs and are confined to small homes where distancing from abusive relatives is not possible.

"Recently, a woman was beaten up by her husband because she needed money for sanitary napkins. Before COVID-19, she could go out to purchase second-hand clothes to use them as pads but now she can't leave home," Arya Indirias Patras, a gender studies researcher, told DW.

Government officials reported a 25% increase in domestic violence incidents during the lockdown across the eastern Punjab province, with authorities registering 3,217 cases between March and May.

The first case of coronavirus was confirmed in Pakistan on February 26, 2020. The country was put under a partial lockdown from April 1, which lasted until May 9. As of Thursday, the South Asian country has recorded over 240,000 coronavirus cases and almost 5,000 related deaths.

Currently, the federal government is trying to control the spread of the virus by imposing "smart" lockdowns in COVID-19 hotspots.

The WHO has recommended that Pakistan impose intermittent lockdowns lasting two weeks each to contain the outbreak. Meanwhile, Pakistani opposition parties and doctors' associations are demanding a complete lockdown.

Pakistan, a country of over 200 million people, ranks sixth on the list of the world's most dangerous countries for women. According to statistics collected by White Ribbon Pakistan, an NGO working for women's rights, 4,734 women faced sexual violence between 2004 and 2016. Over 15,000 cases of honor crimes were registered. There were more than 1,800 cases of domestic violence and over 5,500 kidnappings of women during this period.

According to media reports, more than 51,241 cases of violence against women were reported between January 2011 and June 2017. Conviction rates, meanwhile, remain low, with the accused in just 2.5% of all reported cases ending up being convicted by the courts.

To help victims of domestic violence, authorities in Punjab upgraded their Women Safety smartphone app, which was introduced two years ago by the Punjab Safe Cities Authority (PSCA). The Human Rights Commission of Pakistan, a non-governmental organization, also launched a helpline for the victims. But activists say the helplines are not very effective.

"I called the government's helpline many times and got connected only on the fifth try. I also left a voice message that no one responded to," rights activist Maham Ali told DW.

As authorities have largely failed to offer support to victims of domestic violence, women in dire straits are often helped by human rights activists and lawyers.

Sabahat Riaz, a human rights lawyer working at the Dastak shelter for women, told DW that calls to their helpline have nearly doubled since the start of the coronavirus crisis, adding that the nature of complaints has also changed. "In the past, we mostly received calls from young women facing domestic violence, but now we are also getting calls from the elderly. In addition, neighbors concerned for women and children's safety also reach out to us," Riaz said.

According to Riaz, one of the biggest challenges for the government-run institutions is to effectively train their staff and streamline complaints. Union council offices and police departments are not trained to deal with issues of domestic violence, she added.

"Police officials are generally not gender-sensitized. They also view domestic abuse as a private dispute and discourage victims to report," Riaz said.

Not only women, children, too, are facing domestic abuse during the health crisis. Experts say they are not only at risk of abuse at the hands of adults but also suffer psychologically due to a tense environment at home.

Rozan, an Islamabad-based non-governmental organization, recently reported that mothers calling its helpline admitted being aggressive toward their children and sought advice on anger management from a counselor.

"There is a hierarchy of violence in frustrated families. The in-laws and husband are violent with the wife, who takes out her anger on children," Ruhi Ghani, a psychologist, told DW.

Zahra Vayani, a lawyer, says the number of children being sexually abused has considerably increased during the COVID-19 crisis. "I have received reports about children as young as four being raped during the lockdown," she told DW, adding that children working as domestic workers have been facing increased abuse since the start of the pandemic.