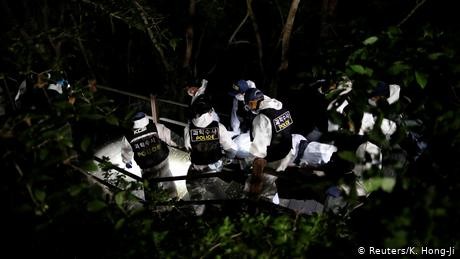 Park Won-soon, the mayor of Seoul who was seen in some circles as a future South Korean president, was found dead Friday following an hours-long overnight police search using drones and sniffer dogs.

Park left an apparent suicide note, which was found on a desk at his official residence. In the signed, handwritten letter, Park thanked the people who had stood by him during his career and apologized to his family for causing them "suffering."

The letter was released by the city government with permission from Park's family on Friday morning, less than 12 hours after the body was found on Mount Bugak in northern Seoul.

"I am sorry to everyone. Thank you to all the people who have been with me throughout my life. I am sorry to my entire family for the suffering that I have caused. Farewell to you all," the letter read.

According to police, Park left his official residence on Thursday morning carrying a backpack. He left a message on his daughter's mobile phone answering service that she first heard more than five hours later.

She said the message sounded like a "last will."

After trying to call her father and discovering the phone had been switched off, she contacted the police and a full-scale search was launched.

Park, 64, was found dead in a forested area close to a Buddhist temple on the slopes of Mount Bugak shortly after midnight, with his body later covered in a blue tarpaulin.

Police confirmed there were no indications of foul play and said on Friday morning that they intend to conduct an investigation to determine the cause of the mayor's death.

South Korea's Yonhap news agency reported that the investigation will be conducted in accordance with procedures for a suicide.

Park had been recently reelected for a third consecutive term as mayor of the South Korean capital in June, and there were few indications of anything amiss until the middle of this week.

As recently as Wednesday, he had unveiled a major new initiative for the city, a "Green New Deal" designed to create employment opportunities and growth in environment-friendly industries.

His sudden disappearance on Thursday, however, came one day after a former secretary reportedly filed a criminal complaint with authorities alleging "unwanted physical contact" and "sending inappropriate messages" to her mobile phone.

Police have declined to comment on the investigation which, under Korean law, was automatically terminated upon the mayor's death.

Questioned by local media, Seoul authorities said they were "not aware" of the allegations, Yonhap reported.

Park was a political heavyweight in the ruling Democratic party, and had been at the helm of Seoul's government for nearly a decade.

The capital is home to nearly 10 million people, almost a fifth of South Korea's population. He had won three elections on a platform of social and gender equality.

Park had also openly expressed his ambition to become president by contesting the 2022 election.

"South Koreans will now debate the handling of personal misconduct allegations, mental health during the pandemic and the changing leadership landscape."

Park's death also increases the importance of by-elections to be held in April 2021.

"Choosing a new mayor of the capital one year ahead of the 2022 presidential election will become a referendum on the progressive ruling party's management of the pandemic-era economy," said to Easley.

"Before then, the public will inevitably draw comparisons between Park and former president Roh Moo-hyun, who committed suicide in 2009 after corruption accusations," he added.

The Seoul city government announced on Friday that it will hold an official funeral ceremony for the deceased mayor and operate according to a contingency plan.

In the note he left behind, Park had asked to be cremated and have his ashes scattered at this parents' graves.

"We pray for the soul of the deceased and extend our deepest condolences to the citizens [of Seoul]," Vice Mayor Seo Jeong-hyup said in a hastily arranged press conference.

"City affairs will firmly continue, according to Mayor Park Won-soon's values, which placed priority on stability and welfare."

The funeral will include a five-day mourning period, with an altar set up in front of the City Hall in central Seoul on Friday to enable citizens of the city to pay their respects.

A history of fighting for human rights

Park was expelled from Seoul National University in the 1970s for protesting against the policies of the military government of President Park Chung-hee, and later served a four-month prison term.

He graduated from Dankook University and earned a diploma in international law at the London School of Economics.

Park began his legal career fighting for human rights and taking up social injustice cases. He was a joint founder of a political watchdog organization called People's Solidarity for Participatory Democracy.

He subsequently set up the Beautiful Foundation and also served on South Korea's Truth and Reconciliation Commission, examining historic human rights violations between 1910 and 1993.

Park was first elected mayor of Seoul in October 2011 as an independent, although he was strongly supported by the Democratic Party, which presently has a large majority in the national parliament, and the left-of-center Democratic Labor Party.

He was reelected in June 2014 and, in June this year, was returned for a third and final term as mayor of Seoul.

There was widespread speculation that he would in the future assume the leadership of the Democratic Party, and become the country's president.