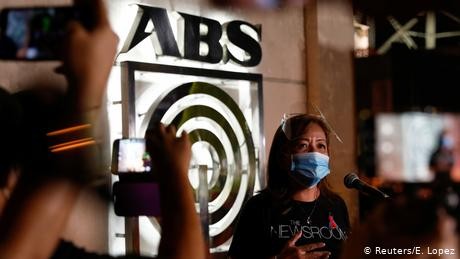 On Friday, a parliamentary committee in the Philippines refused to renew the license for ABS-CBN, one of the country's largest broadcasters, after being forced to go off air in May.

An overwhelming majority of Philippine lawmakers decided not to grant ABS-CBN a 25-year franchise, dismissing the request as "undeserving." Renewal of broadcasting licenses in the Philippines is subject to congressional review.

"The committee's decision to reject our franchise renewal is painful. We thank the committee for allowing us to air our point of view on this issue. We will find other ways to continue to be of service to our countrymen," ABS-CBN President Carlo Katigbak said in a televised statement.

ABS-CBN and President Rodrigo Duterte have been at loggerheads since the 2016 presidential election. At the time, Duterte accused the network of not airing his paid political ads and instead accommodating his opponents.

After becoming president, Duterte threatened to take the channel off air several times.

"Your [ABS-CBN] franchise will end next year. If you expect it to be renewed, I'm sorry. I will see to it that you're out," Duterte said in December last year.

During the congressional hearing, Katigbak apologized for "offending the president," saying the network has no political agenda.

"It's really very sad for the thousands of employees of ABS-CBN and [its] millions of viewers," Sol Aragones, a congresswoman, said after the decision. Aragones, who previously worked for the network as a reporter, was one of the only 11 lawmakers who voted in favor of renewing the ABS-CBN franchise.

On May 5, a day after the network's legal franchise expired, the country's telecom regulator ordered ABS-CBN's 21 radio and 38 television stations to cease operations. Its cable news and digital operations, however, continued to operate.

Many citizens took to the streets to protest the decision against ABS-CBN – a major source of information and entertainment for millions of people in the Southeast Asian country.

It is not the first time ABS-CBN has been forcefully shut down; in 1972, the late dictator Ferdinand Marcos ordered its closure after imposing martial law in the country.

Critics say the congressional decision is yet another proof of Duterte's authoritarian style of governance. The president has been accused of unleashing a crackdown on dissidents, opposition groups and independent media since coming to power.

Last month, a Philippine court convicted journalists Maria Ressa and Reynaldo Santos in a cybercrime case, drawing international criticism against the verdict. Ressa's news network, Rappler, has been critical of President Duterte's controversial war on drugs. If convicted, Ressa could be sentenced to 100 years in prison.

The government, however, denies using pressure tactics against media.

"The [presidential] palace has maintained a neutral stance on the issue [of press freedom] as it respects the separation of powers between the two co-equal branches of government. Much as we want to work with the aforesaid media network, we have to abide by the resolution of the House committee," presidential spokesperson Harry Roque said in a statement.

"It is clear that whatever Duterte wants, the Congress gets it done," said Vergel Santos, president of the Center for Media Freedom and Responsibility.

"The comment presupposes that he [Duterte] is interested in whatever decision the committee will hand down. The network, through its president, has publicly apologized… for the wrong it committed against him [the president]… Moreover, the committee members are independent-minded as evidenced by the committee proceedings," Panelo told DW via text message.

Mairchu Lambino, a media law professor at the University of the Philippines, dubbed the decision against ABS-CBN an "abuse of power."

"The people will demand justice," he said.