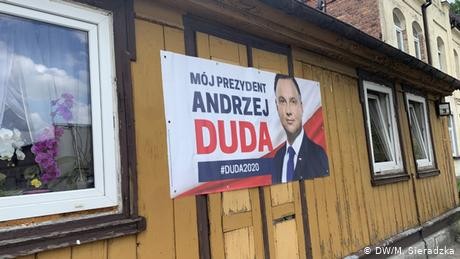 For a long while, it looked like Polish President Andrzej Duda would be able to win an absolute majority in the first round of elections, making Sunday's runoff unnecessary. But on June 28, Duda, an ally to the ruling Law and Justice (PiS) party, received 43.5% of votes — while 30.3% went to the candidate of the opposition Civic Platform (PO), Warsaw Mayor Rafal Trzaskowski.

Trzaskowski, who will now face Duda in the runoff vote, is a political science graduate. Previously, he has served as minister for digitization in Donald Tusk's government and a member of the European Parliament. In the runoff, he has a good chance of getting the votes of many people who cast a ballot for other opposition candidates in the first round.

The election result will decide whether the nationalist, conservative PiS will retain its monopoly on power. Trzaskowski would prove a hard opponent who could thwart further controversial reforms intended by the ruling party. For many citizens in the EU member state, the vote represents a crossroads for the country.

One of those who shares this opinion is Albert Budlewski, a farmer from the eastern village of Szepietowo, which is considered a PiS bastion.

In Szepietowo, the incumbent president received almost 69% of the vote. As everywhere in the Polish countryside, there is much praise for the PiS' generous social policies, including the child allowance that was introduced in 2016 for the first time in Poland, additional pension payments, tax cuts for young people and state support in the case of natural catastrophes, such as the drought that hit the country hard last year.

Budlewski, a pig farmer, sees no reason for any change in Polish politics. Duda is assured of his vote. "He is the guarantee that the government can keep working as well as it has. It can also negotiate well with Brussels because we are getting more and more money from the EU. That is even more important now after the coronavirus crisis," Budlewski says.

Budlewski's father sees Duda as a defender of the values he finds important. "We don't want any Western trends, no right to adoption for homosexuals — that would be an attack on Polish tradition and the Catholic Church," the 68-year-old told DW. He feels that Duda showed courage in "calling the problem by its name" and speaking of a supposed "LGBT ideology" that does not view a man, woman and children the only valid family model.

When Trzaskowski visits places like Szepietowo, he tries, like his rival, to woo voters there with promises of social improvement. As a cosmopolitan liberal politician, he already has residents in big cities on his side, but it is the voters in small towns and villages who will ultimately decide the election's outcome.

In Raciaz, another PiS stronghold in central Poland, Trzaskowski was booed as a "traitor and liar" — yet hundreds applauded wildly when he promised assistance to talented young Poles: "I propose to support 50,000 of the most talented young people to give them the chance to go to good schools and good universities."

That is something Agnieszka Osowiecka would like to see for her son. She is distressed that he recently emigrated to the Netherlands for work.

"Here in Raciaz, the employment office sends him to a work placement for €240 ($271) per month. What is €240 for eight hours' work every day? And President Duda talks about chances for youth! Well, that is their chance: leaving the country," she says bitterly. Her vote is going to Trzaskowski.

But she is in a minority in Raciaz. Duda's anti-German rhetoric is particularly well-received among PiS supporters here. Many of them see it as the "defense of Polish interests." When the tabloid Fakt published criticism of the way the president had pardoned a pedophile offender, Duda attacked the publishing house Axel Springer, which is partly German-owned, and a co-owner of Fakt.

Duda spoke of the "next German attack in these elections" and asked whether the Springer corporation wanted to influence the presidential polls. The president also criticized the Warsaw correspondent of the German newspaper Die Welt, Philip Fritz. Duda said Fritz had written that Trzaskowski would make a better president because he did not insist on Germany paying reparation for damage done in World War II, as Duda has.

After these comments, the Polish Foreign Ministry summoned the charge d'affaires at the German Embassy in Warsaw. The deputy foreign minister, Szymon Szynkowski vel Sek, spoke of a "series of articles in German media that employ manipulations and lies" and that raised suspicion of an intention to influence the democratic election process in Poland. He accused the German media of "bias toward one of the candidates."

End of the PiS monopoly on power?

The German Embassy in Warsaw declined to comment on what was said at the meeting, but Szynkowski vel Sek said the German diplomat Knut Abraham had taken note of the accusations but alluded to the freedom of the press.

German parliamentarians from almost all parties expressed concern about the state of press freedom in Poland in view of the verbal attacks on Fritz.

The runoff on July 12 is expected to be closely run. Even the first round on June 28 was followed with great interest, as was reflected in the 64.5% turnout, which was unusually high for Poland.