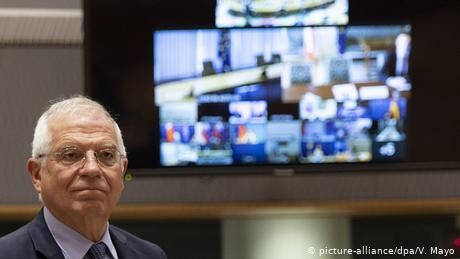 The European Union on Sunday applauded the efforts of Serbia and Kosovo's leaders in breathing fresh life into a frozen dialogue process.

"The EU-facilitated dialogue on comprehensive normalization of relations between Serbia and Kosovo is back on track after 20 months,'' EU special envoy for the dialog Miroslav Lajcak said in a video statement after the meeting had ended.

Read more: Hashim Thaci's past catches up with Kosovo's future

"We agreed on the main elements of the process. We also agreed on the agenda of our next meeting that will take place this coming Thursday, in Brussels, in person. I want to thank our partners for their constructive engagement today,'' Lajcak said.

The round of talks on Sunday followed a virtual meeting on Friday involving Chancellor Angela Merkel and French President Emmanuel Macron. It came as the EU seeks to reinvigorate a normalization process that has stalled for the past two years.

Serbia has refused to recognize Kosovo's unilateral declaration of independence since the province broke away in the 1998-99 conflict that led to a NATO bombing campaign against Serb troops.

Ahead of the meeting on Sunday, EU diplomatic chief Josep Borrell, who chaired the talks along with Lajcak, urged both sides to cooperate. He said the lack of a solution was restricting economic progress and risking instability.

"These talks will require political courage from both sides, will require commitment and engagement in the spirit of compromise and pragmatism," he said.

"It has never been easy to find solutions to problems that have been so lasting and so painful but this is why we are here today - to try again."

The next stage of the Belgrade-Pristina dialogue is a planned meeting between Vucic and Hoti in Brussels on Thursday.