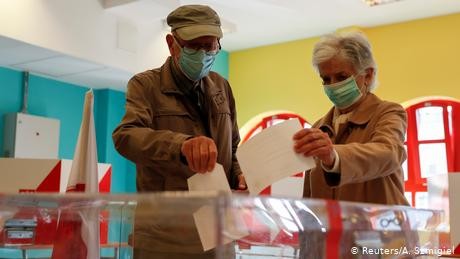 The election sees right-wing populist and Donald Trump ally Duda, who is seeking another five-year term, pitched against the mayor of Warsaw, Rafal Trzaskowski.

An exit poll by the Ipsos institute placed Duda on 50.4% and Trzaskowski on 49.6%. The survey has a margin of error of plus or minus two percentage points, making the result too close too call. Despite this, Duda seized on the poll to claim an early victory.
Read more: Poland heads to polls to elect next president

"Long live Poland! To win the presidential election with 70% voter turnout is something incredible," Duda said during an electoral rally in Pultusk, some 60 kilometers north of Warsaw. "I am touched. Thank you to all my compatriots."

Duda, who is backed by the ruling right-wing Law and Justice (PiS) party and the government, has campaigned on traditional values and social spending in the mostly Catholic nation.

Trzaskowski is a former European Parliament lawmaker who entered the race relatively late to oppose a perceived erosion of democratic rights under the current administration.

Late polling had shown there was only a very small margin between the two 48-year-old candidates.

Hoping to mop up centrist votes

The ballot was to have taken place in May, but it was delayed by health concerns amid the coronavirus pandemic. Some 30 million voters were eligible to cast ballots.

Duda garnered 43.5% support in the first round and Trzaskowski 30.5%, but the mayor was expected to pick up support from more centrist voters who backed now-eliminated candidates.

The election will decide if the government can deepen judicial reforms that the European Union claims will increase political control over the judicial system. Brussels has launched several infraction procedures over the so-called reforms since 2017.

Read more: Polish MEP — We are trying to keep Europe 'great and Christian'

Duda has projected himself as a defender of Catholic values and of generous social benefit programs that have transformed life for many in poorer rural regions.

However, critics say his campaign has also drawn on homophobia and anti-Semitism.

Trzaskowski has said he wants a more tolerant Poland, and he has tried to present himself as a unifying figure.

While Polish presidents have few executive powers, they do possess a power of veto that Trzaskowski could use to block PiS legislation.