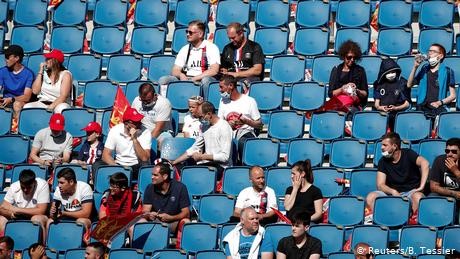 Fans returned to elite European soccer on Sunday, with spectators turning out in their thousands to see Paris Saint-Germain in action against lower league rivals Le Havre.

The French government relaxed health protocols ahead of the game, with 5,000 fans allowed at Le Havre's 25,000-seat Stade Oceane.

Spectators had to wear face masks to get into the ground and were asked to sit apart from one another once they were in the stands. Upper tiers of seating were left empty.

PSG stars Neymar and Kylian Mbappe also sported face masks on their way into the arena, before embarking on their 9-0 drubbing of the League 2 side.

Players from the Paris club wore kits featuring the words Tous unis (All united) and Merci (Thank you) to show appreciation for health workers.

While the return of fans comes amid growing concern about a possible second wave of infections, the risk was not deemed to be too great.

"It is a victory for French football, sport in general," said outgoing Sports Minister Roxana Maracineanu, who was at the match.

"I am delighted that football in France can resume in a popular way, with more people in the stadiums. It is the only country in Western Europe to be able to do this."

The home fans were in fine mood, despite the uphill task facing their side as the game got underway.

"We don't give a damn about PSG, this match is first and foremost a way to get back together with our mates!" said Johan Vattier, president of the Les Barbarians Havre supporters group.

French football officials are the first among Europe's big 5 leagues to allow spectators back into the stadium. France is the only one to have abandoned its domestic league completely, never resuming it even after new infection rates began to dip.

Read more: Football fans in Hungary allowed back into stadiums

England, Germany, Italy and Spain have all resumed their domestic leagues, but without fans attending matches.