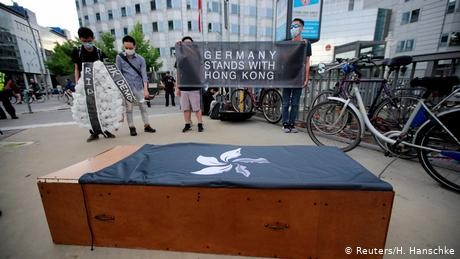 A member of Germany's Green Party on Monday called on the country's government to suspend an extradition agreement with Hong Kong in response to a new controversial security law requiring the territory to bow to the Chinese legal system.

Germany had signed an extradition bill with Hong Kong — and not with China — "for good reason," Bütikofer said. "Because we do not trust the Chinese legal system."

"We cannot, in all seriousness, hand people over to such an unjust system," the Green politician warned.

'Nothing remains' of Hong Kong's autonomy

Australia and Canada have already suspended their extradition agreements with Hong Kong.

With a new security law imposed by China and now in place, the special administrative region would be forced to accept the Chinese legal system, said Bütikofer.

He accused Beijing of massively interfering with Hong Kong's autonomy.

"Substantially, nothing remains" of Hong Kong's autonomy, the MEP said.

EU foreign ministers must also make it clear that they won't just shrug their shoulders as they've done before, Bütikofer said.

The principle of "one country, two systems" had granted the financial metropolis special rights, including freedom of speech and assembly, since 1997, when the former British colony was handed over to China.