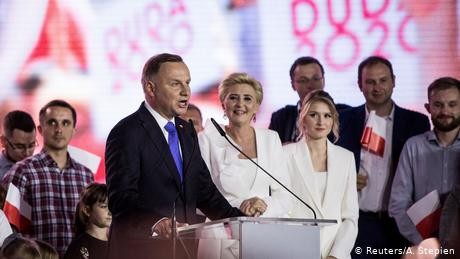 With results in from over 99% of polling stations, and remaining uncounted votes unlikely to change the outcome, Duda won 51.21% of the vote, the commission said.

Electoral commission head Sylwester Marciniak said the final official results would only be announced later and that numbers could vary slightly but not to an extent that would alter the outcome.

The difference in votes between the two candidates was around 500,000.

'We have to accept the result'

"I don't want to speak on behalf of the campaign staff, but I think that this difference is large enough that we have to accept the result," said Grzegorz Schetyna, former head of Poland's opposition Civic Platform (PO) grouping and member of parliament, to broadcaster TVN24 on Monday.

"These are not the official results yet, but we have the certainty. It's for sure that incumbent president Andrzej Duda will remain in his office for the next five years," said DW's Monica Sieradzka, reporting from Warsaw.

"It means for Poland…that the ruling Law and Justice Party (PiS) can feel very comfortable and secure. And it can continue its reforms, which have been heavily criticized by the European Union. It can strengthen its grip on the state institutions or on the courts, on the public media. Critics say Poland is turning into an authoritarian state," she said.

The Sunday vote was originally planned for May but was delayed due to a political battle over whether the election should be held amid the coronavirus pandemic.

Cultural issues dominated the campaign trail, with the government, state media and the influential Catholic church all ultimately coming out in support of Duda, a social conservative.

Duda is backed by the ruling right-wing Law and Justice party. His second-term campaign focused on traditional values and social spending in the Catholic-majority country.

In the weeks leading up to the election, the president's rhetoric shifted farther to the right. He seized on gay rights as a key theme, denouncing the LGBT+ rights movement as an "ideology" worse than communism.

Duda also tapped into anti-Semitic tropes in his characterization of his rival as someone who would sell out Polish families to Jewish interests. Poland had been home to Europe's largest Jewish community before it was decimated by Germany in the Holocaust.

Tough road ahead for PiS

According to experts, the close election means the governing party, which has faced strong criticism for its controversial reforms of Poland's judiciary, will face increased opposition.

"Despite Trzaskowski's defeat, his strong performance looks like a new beginning, a new dynamic for the opposition," Andrzej Rychard, a political scientist at Warsaw University, told local media. "We're on the cusp of some very significant changes on the Polish political scene."

The government will also be tasked with the immediate challenges posed by the coronavirus pandemic, which is pushing Poland into its first recession since the fall of communism 30 years ago.

"Poland is split down the middle," said Witold Orlowski, a professor at Warsaw University of Technology Business School.

"On the one hand, even this slim victory is a PiS success and will allow it to continue to govern, at least technically," Orlowski said. "On the other hand the social and economic situation will deteriorate and a large part of the electorate will blame the PiS."

The 48-year-old former lawyer came to power in 2015 on a platform of increased social benefits.

In his first term, he lowered the retirement age for men from 67 to 65 and instituted a monthly allowance for families of 500 zloty ($130, €115) per child. He also strengthened Poland's ties with NATO.

In 2017, the EU launched unprecedented proceedings against Poland over changes to the country's judicial law made on Duda's watch that could see its EU voting rights suspended.