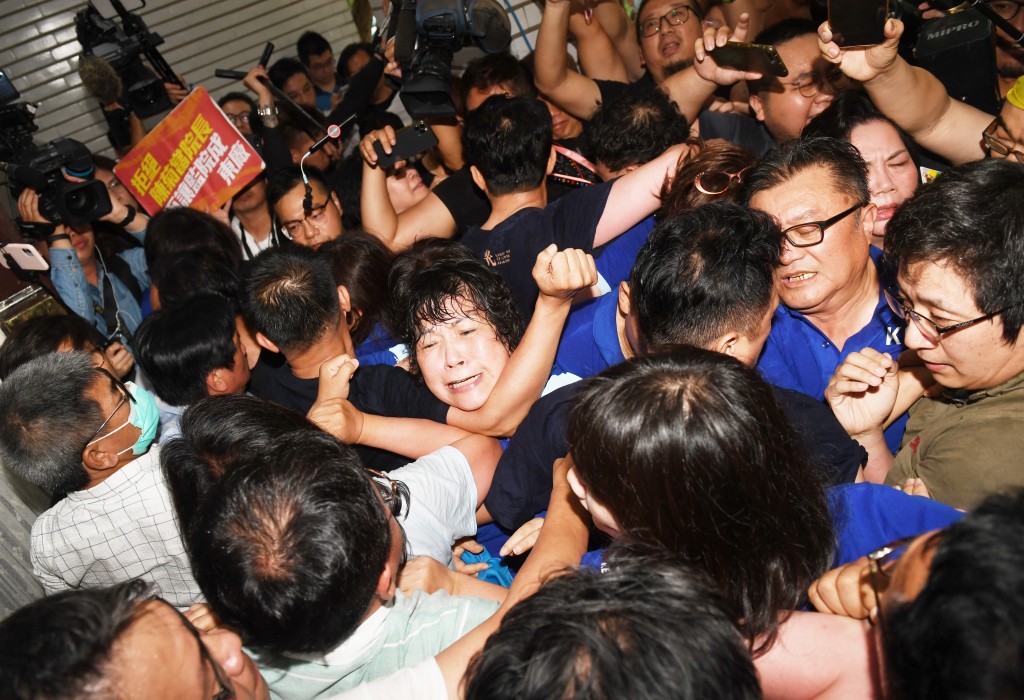 TAIPEI (Taiwan News) — Legislators from the ruling Democratic Progressive Party (DPP) and the Kuomintang (KMT) had a physical confrontation in the Legislative Yuan on Tuesday morning (July 14) over the appointment of Chen Chu (陳菊) as the president of the Control Yuan.

Legislators were expected to convene Tuesday morning to review the appointments of the Control Yuan's president and its members, all of whom were nominated by President Tsai Ing-wen (蔡英文). As the DPP holds a majority in the Legislative Yuan, all of them are likely to obtain legislative approval.

Yet before the assembly hall opened at 7 a.m., KMT lawmakers mobilized into action to prevent Chen from entering the hall but they were met with DPP lawmakers, who had camped outside the building since Monday morning. The two sides then engaged in a scuffle, pushing and dragging one another while police officers tried to separate them.

One KMT lawmaker, Fai Hong-tai (費鴻泰), was injured by glass shards of a broken window that was shattered during the brawl, while others suffered mild wounds and bruises. The melee later moved into the meeting room after Chen managed to enter the assembly hall at around 7:16 a.m.

However, as of press time, the meeting has not begun due to the KMT's disruption.

KMT lawmakers are currently occupying the speaker’s seat to delay the meeting, which was scheduled for 9 a.m. Posters are also being handed out by the KMT in the assembly room, calling for the annulment of Chen’s appointment and the abolition of the Control Yuan. In the meantime, the KMT has also mobilized supporters to rally outside the Legislative building to protest against Chen. The party has argued that Chen's appointment is proof that the DPP is engaging in pork-barrel politics and has questioned Chen's credentials.

The Control Yuan is an independent government agency that monitors the performance of government bureaus and public servants. It, along with the Examination Yuan, are two agencies designed to balance the power held by the administrative, legislative, and judicial bodies.

Calls for the abolition of these two agencies have been increasingly frequent in recent years, as their functions have been much marginalized. President Tsai has defended her decision to nominate new Control Yuan members, saying she has advocated the agency’s abolition, but the nominations should be carried out before the constitution is amended.