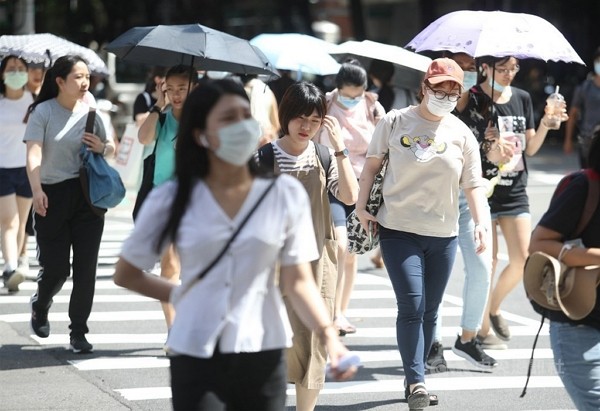 The Central Weather Bureau (CWB) said on Saturday (July 11) that it has issued a heat alert for 12 cities and counties around Taiwan as a Pacific high pressure and a seasonal southwesterly wind system continue to affect the island.

The CWB said an orange heat warning has been issued for Taipei in northern Taiwan, Changhua and Nantou in the central areas, Kaohsiung and Pingtung in the south, as well as Hualien and Taitung in the east.

At the same time, a yellow heat alert has been issued in New Taipei, Taoyuan and Hsinchu in the north, Taichung in the central parts and Yunlin in the south, the CWB said.

The CWB said northern Taiwan is expected to experience daytime highs of 37 degrees on Saturday with the mercury in central and southern Taiwan expected to hit 36 and 34 degrees, respectively.

In the east, temperature highs are expected to range between 33 and 35 degrees on Saturday, the CWB said.

It added that it did not rule out the possibility that even higher temperatures will be seen in the valleys in eastern Taiwan's Hualien and Taitung, where it is not easy for heat to be dispersed.

On Friday, the highest temperature was recorded at 39.2 degrees in Yuli Township of Hualien, according to the CWB.

It said sunny to cloudy skies are expected to prevail on Saturday, but sporadic showers and even thundershowers are possible in the mountainous regions around the island as well as the low-lying areas in greater Taipei and Yilan, particularly in the afternoon.

The CWB said people engaged in outdoor activity should drink more water to avoid heat stroke, and take steps to protect themselves from getting sunburn amid high UV levels.