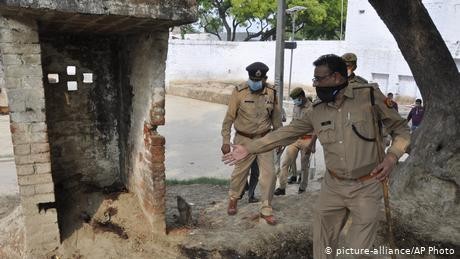 Vikas Dubey, a notorious Indian gangster accused of killing eight police officers, was shot dead on Friday morning after his arrest on Thursday.

The Uttar Pradesh police said that the gangster was killed when he "attempted" to flee when one of the vehicles bringing him back to his home city of Kanpur overturned.

Dubey had allegedly snatched the pistol of an injured policeman, fired at the police and died in retaliatory firing.

Dubey was arrested in the city of Ujjain in the state of Madhya Pradesh on Thursday morning, after being on the run for almost a week. He was handed over to the police of his home state, Uttar Pradesh, in the wee hours of Friday.

Dubey was on the run from the police and fled to various places in five states before being captured in Madhya Pradesh. He was spotted at a guesthouse in Delhi on Wednesday before he was tracked down in Ujjain.

A killer who visited a deity

On Thursday, Dubey reached Ujjain to offer prayers at the famous Mahakal temple, where he was identified by a local shopkeeper and his footage was captured on CCTV cameras.

He even stopped to click a selfie, despite the temple's ban on carrying mobile phones inside. He was reportedly unarmed inside the temple.

The security guards confronted Dubey when he was leaving the temple and after a physical altercation, he was handed over to the police.

"Vikas Dubey has been a cruel killer from his younger days and was involved in the heinous killings of policemen. He has been arrested from the Mahakal temple," said Narottam Mishra, the home minister of Madhya Pradesh.

An ambush that led to Dubey's arrest

Vikas Dubey, who is accused in 60 cases of murder, robberies and kidnappings, came into the national spotlight last week when his gang killed eight policemen.

A group of a dozen policemen had gone to Dubey's hideout in his village in the state of Uttar Pradesh to arrest him last week, when Dubey's gang ambushed them by firing from rooftops.

According to H.C Awasthi, the director-general of the police of Uttar Pradesh, Dubey had been tipped off about the raid.

An autopsy report has revealed that along with shooting the police officers, Dubey's gang also severed the head and toes of a police officer with an axe.

Some politicians alleged that Dubey surrendered to the police in Madhya Pradesh to avoid being killed in an encounter with the police. The Uttar Pradesh police didn't classify Dubey's death as a extrajudicial killing.

Encounter killing is a term used in India to describe alleged extrajudicial killings by the police or the armed forces, supposedly in self-defence, when they encounter suspected gangsters or terrorists.

Amitabh Thakur, an Indian Police Service (IPS) officer posted in Uttar Pradesh, had called for an investigation into Dubey's arrest and the gangster's ability to travel across several states before being arrested in Ujjain.

Dubey's arrest had also raised a furor on social media as several journalists tweeted out possible locations of the gangster. One journalist even claimed that Dubey had reached Nepal.

Dubey had reportedly admitted to the police of killing the eight officers and revealed that his gang was planning to burn the bodies with oil but couldn't do so as more police arrived on the murder scene.

The gangster is also accused of killing a Bharatiya Janata Party leader, Santosh Shukla, in a police station, and a college principal.