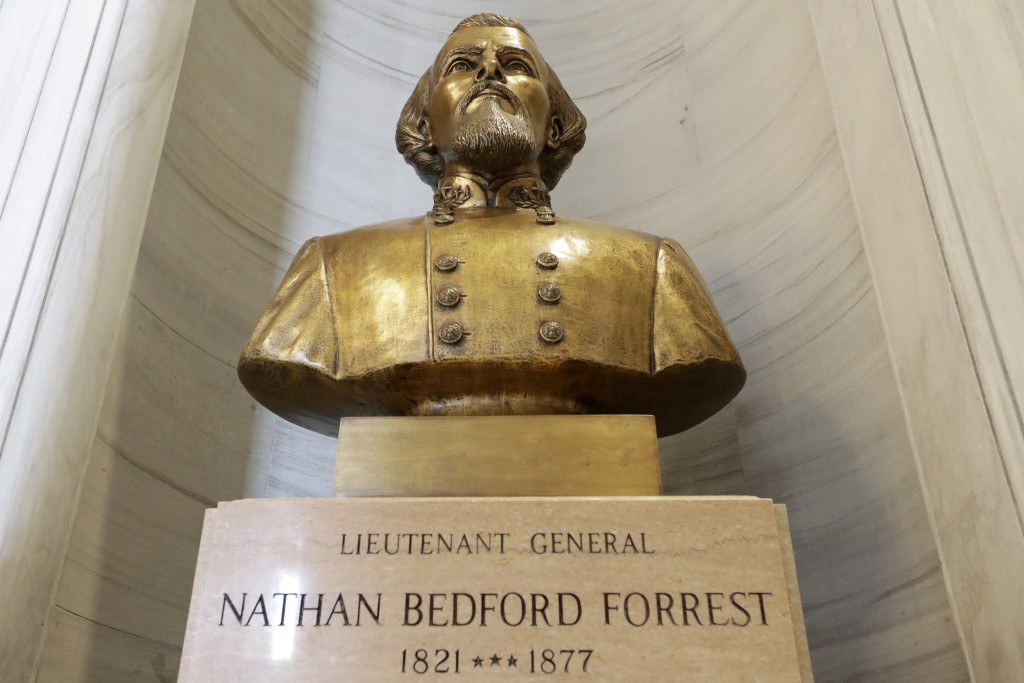 NASHVILLE, Tenn. (AP) — A Tennessee panel voted Thursday to recommend the bust of a Confederate general and early Ku Klux Klan leader be moved from the state Capitol into the state museum, casting the first of two votes needed to make the move happen.

The State Capitol Commission's 9-2 vote on the Nathan Bedford Forrest bust went beyond the suggestion of Republican Gov. Bill Lee, who said Wednesday that Forrest's history can be more fully laid out for the public in the museum.

The panel also sided with Comptroller Justin Wilson in suggesting that the busts of David Farragut, a Union military leader, and U.S. Navy Admiral Albert Gleaves be moved from the Capitol to the state museum as well, with state and federal officials honored instead in the Capitol.

In 2017, the commission voted against moving Forrest's bust to the museum.

The action next moves to the state’s Historical Commission, which would need to approve the move by a two-thirds margin. That vote could be months away. It's unclear if that panel would vote on removing all three, or make an amendment to address only Forrest.

Forrest was a Confederate cavalry general who amassed a fortune as a plantation owner and slave trader in Memphis before the Civil War. His involvement with the Klan came after the war.

The bust was unveiled in 1978, with the late Democratic Sen. Douglas Henry promoting the idea. The symbol has sparked multiple protests demanding its removal over the years.

State Finance Commissioner Butch Eley, the Capitol Commission chairman, on Thursday recalled being in the first integrated class in Cheatham County in the 1960s, where as a white elementary student he said he was aware that the “unspoken rules legally kept us together, but practically kept us apart.”

"I’m hopeful, that from our action today, we will provide new opportunities and new conversations for building relationships that have been damaged and for living out the real meaning of the words of our founding documents, that all men are created equal,” Eley said.

At the meeting, four Democratic state lawmakers spoke in favor of removing the bust, three of whom are Black. Two white Republican lawmakers spoke against moving the Forrest bust, saying the state would be wrongly removing history.

“Today was a victory but the bust remains in the Capitol for now," said Democratic Sen. Brenda Gilmore, a Black lawmaker. "Just as a political process is protecting the Nathan Bedford Forrest bust, systems of oppression are designed to make people give up. But we are not giving up.”

GOP Senate Majority Leader Jack Johnson said his poll of senators came back 19-14 in favor of keeping the bust where it is, and he voted accordingly as a Capitol Commission member. The Senate has 28 Republicans and five Democrats. Republican Rep. Matthew Hill cast the other ‘no’ vote Thursday.

Some Republican officials have instead suggested adding context to the bust and leaving it where it is.

The national outcry over the death of a Black man, George Floyd, in police custody in Minnesota has sparked a new push to remove Confederate symbols, including the Forrest bust.

Lee's call for moving the bust out of the Capitol is the latest step in his changing position.

In December 2018, just before taking office, Lee told The Tennessean that “the Ku Klux Klan is a part of our history that we’re not proud of in Tennessee, and we need to be reminded of that and make certain that we don’t forget it. So I wouldn’t advocate to remove” the bust.

Early last year, he said he wouldn’t be opposed to adding context to the Forrest bust.

Lee said Wednesday the opportunity for “full context” on Forrest is available only in the state museum.

This version corrects the military history of Albert Gleaves.