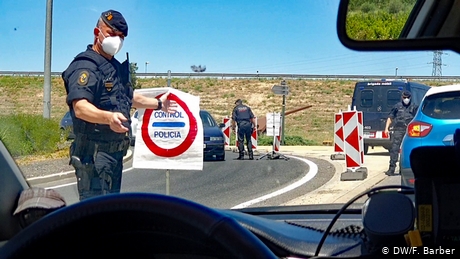 Lleida, the capital city of the Segria region — 180 kilometers (111 miles) east of Barcelona — finds itself in a "wartime mode" again as a new lockdown takes hold.

Last Saturday, the president of Catalonia, Quim Torra, unexpectedly announced that all land access routes to the city and 38 other municipalities would be closed as of midday. The government granted an extra period of four hours for non-residents to leave the area, which triggered a hasty exodus of hundreds of people by road and rail.

Just five days ago, 140 new positive cases of coronavirus were confirmed in the Lleida region. As of Wednesday, that figure had risen to 850, with 74 positive cases recorded in the last 24 hours alone. Health officials fear that the number could exceed 3,000 over the next two weeks.

"In some way, many of us had intuited an alarming increase in the number of coronavirus cases a couple of weeks ago, despite the lack of information from the media and politicians," Javier Lopez, a social worker and member of the Fruit with Social Justice collective, said. Lopez managed to leave just an hour before the region was shut down.

Following the announcement, hundreds of people made the reverse journey to return to their homes within the Segria perimeter, surrounded by security forces. "It was a real stampede," an employee of the Lleida train station said.

"The worsening situation became even more evident a few days ago when a field hospital was set up in Lleida to cope with the increasing number of emergencies," a resident from Madrid said as she prepared to take one of the last authorized trains. She finally managed to leave the Catalan city but at the cost of leaving her partner behind and interrupting her vacation.

Muhammad Bennani, a Moroccan national, wasn't so lucky. It had been barely an hour since he arrived from Benicarlo — 220 kilometers south of Barcelona — and he had just realized that the Segria region had become a trap. "I traveled by bus to Lleida looking for a job somewhere near Segria that I probably won't be able to get. I live with my family in Benicarlo and now the authorities are preventing me from returning with them," he said, resting on a bench at the Lleida bus station.

So far, residents from the Segria region have not been forced to remain inside their houses. The government has advised the elderly to stay at home and only leave to buy food. Gatherings of more than 10 people have also been banned. However, the head of the Catalan Health Service, Alba Verges, has not ruled out tightening the measures to stop the progress of the virus. If that happens, 210,000 residents who didn't leave the region last Saturday will probably be confined to their homes. The memories of enduring one of Europe's most draconian lockdowns are still far too vivid among Spaniards.

Summer in Lleida has taken on a warlike, almost dystopian atmosphere. The checkpoints around the restricted area are guarded by 200 policemen. Lleida's residents are literally trapped within the boundaries of the region. Only those who have the necessary job authorization papers are permitted to go beyond the sanitary cord.

Among those trapped are hundreds of homeless African day laborers. They survive by sleeping on cardboard, crammed under the arcades of old buildings and in squat houses or, at best, inside the pavilions and hotels that local authorities made available a few weeks ago, in response to pressure from various civil groups. Most of the new COVID-19 outbreaks in Catalonia and Aragon have been reported among foreign workers at slaughterhouses and fruit day laborers. Xenophobic comments have gone viral on social media networks blaming Black fruit laborers for the latest crisis.

The plight of these foreign fruit pickers — most of them, working without papers — is not new. Much of the Spanish fruit consumed by European customers are produced in the lands of Segria and the neighboring regions, making this area a magnet for migrants. Africans have been flocking to the city every spring for more than 25 years, looking for an opportunity to work for a few days in the fields. This time, however, there are concerns that their deplorable living conditions may compromise the health of locals. The coronavirus has made them visible and, in some cases, has led to stigmatization.

The foreign laborers DW talked to know cases of fellow workers who have contracted the virus and have been isolated, but still prefer to take the risk and wait for some employer to hire them, even if they often lack a work permit. The money they earn during the summertime is key to surviving for the rest of the year.

Read more: No hands to harvest strawberries in the Spanish coronavirus lockdown

Local civil groups have accused regional municipalities and the Catalan government of mismanaging the migrant situation. But the Catalan authorities are passing the buck to the national government in Madrid, which they blame for leaving the problem in their hands and for refusing to tackle the situation.

The African workers say that it's not possible to maintain safe distances and hygiene measures, when they are forced to share their makeshift sleeping quarters with 50 others. Activists such as Nogay Ndiaye, a Senegalese member of the Fruit with Social Justice collective, have no doubt that the latest spread correlates to the way institutions have treated day laborers and failed to address their needs such as providing hygienic and decent living conditions.

"They have been left on the street and abandoned for months. Politicians have been unable to guarantee them safe and dignified conditions and now blame them for the return of the disease. They are just the victims," Ndiaye said.